On Dec 7 and 8, 2022  Steven Bercek of  BC Parks hosted meetings online with the Kootenay and the Okanagan area’s volunteer wardens. There were also a good number of BC Parks staff in attendance at each meeting. We hope that other areas in the BC parks system may in the future hold similar wardens meetings. It might be further suggested that these meetings may be made open to the public when they are live online. This would help to educate the public about the need for Ecological reserves.

At both of the meetings, Dr. Tse-Lynn Loh of the BC Parks Foundation introduced the 25/25  program of protecting 25 beautiful places in BC. before 2025. She went on to give a presentation on the use of iNaturalist for documentation of biodiversity in Ecological reserves and other locations.

Presentations were made by Ecological reserve wardens, Screenshots
with a few slides of several of the presentations are shown below;

Pikas live amongst the boulders in Buck Hill ER

A memorial plaque commemorating the service of Malcolm Martin

A young moose on the Trail camera 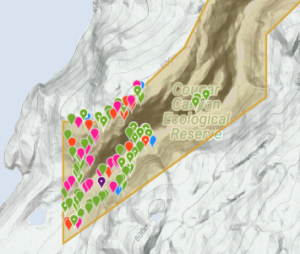 Harold referred to the difficult access to this reserve  but the relative success had by the BC Parks INaturalist group who were able to add significant amounts of information to the database https://inaturalist.ca/projects/cougar-canyon-ecological-reserve

Linda was unable to join but Steven gave her presentation. A concern was mentioned about the increasing numbers of introduced species on this reserve.

The proximity to the golf course often creates problems