Attached is a copy of my report, commissioned by Parks Canada, on Conservation Options for the Elk and Flathead River Valleys in SEBC. This is a critical area in the Yellowstone to Yukon corridor. I will be presenting on the report at the BC Protected Areas Research Forum in Nanaimo on December 13. I am bringing this to your attention because the report includes the recommendation for a new Ecological Reserve – the Fording River Grasslands, located in the “northeastern” section of the Elk Valley. It includes potentially 23 species of conservation concern. See page 43 and 58 of the report. The BC Conservation Data Centre can provide additional details. –W. Stetski 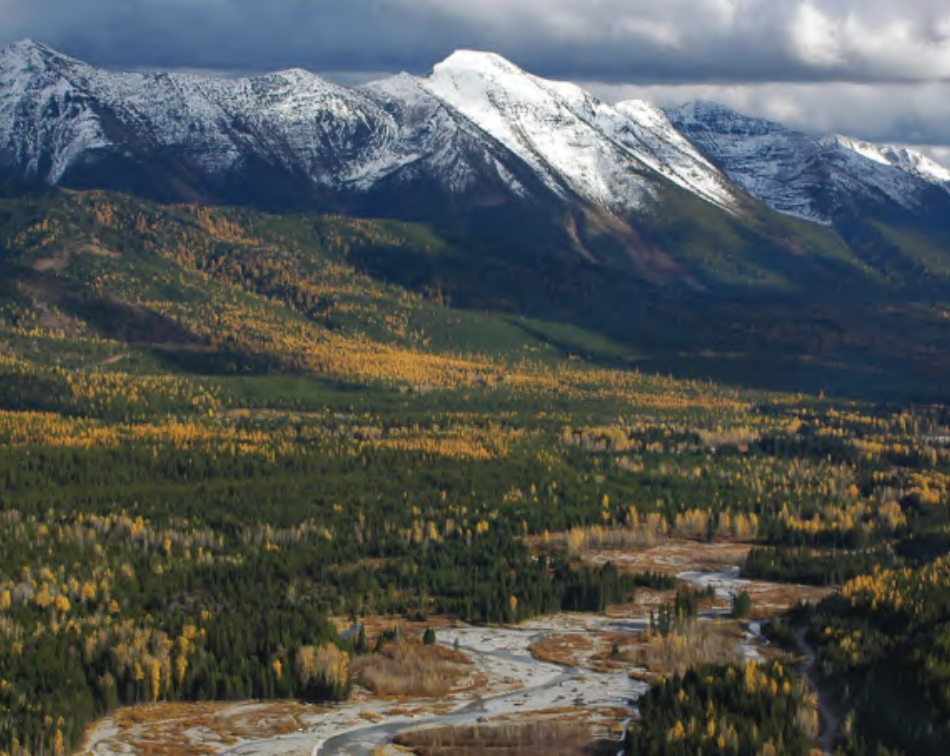 Conservation Options for the Elk and Flathead Valleys

By:
Wayne Stetski
Prepared for:
Parks Canada Agency & Environment and Climate Change Canada
July 2021
Executive Summary
The Flathead Valley is one of the most important natural areas for biodiversity in North America. It is a transboundary watershed shared with the United States, with much of the valley on the American side in federal protection and the Flathead River designated a National Wild and Scenic River in Montana. In Canada, the Flathead adjoins federal and provincial protected areas in Alberta. While extractive activities such as oil, gas and mining are not allowed in the Flathead, logging continues and some roads remain open to motorized access year round. It is not fully protected for conservation.
In the Elk Valley, conservation is at a tipping point. The Elk Valley is home to several communities, a major highway and railroad, the largest metallurgical coal mines in Canada. It has extensive private land holdings that are being clear-cut logged, as well as logging on provincial crown land. It is also home to important relatively intact, but unprotected, wild places, rare high elevation grasslands, and important populations of iconic species like grizzly bears, Rocky Mountain bighorn sheep and westslope cutthroat trout, along with dozens of plant and animal Species of Conservation Concern.
Both valleys have globally significant connectivity values with critical but vulnerable corridors, providing a genetic link for large mammal populations to the south in the USA with Banff National Park to the north. It has been called the most important wildlife corridor in all of North America and is a key component of the Yellowstone to Yukon initiative.
This report provides non-binding recommendations to the federal government, the BC government, and the Ktunaxa First Nation advising on the options for furthering conservation, including securing core habitat and connectivity corridors in the two valleys.
The recommended options include consideration of applying/implementing the following:
Ktunaxa Nation
• Indigenous Protected and Conserved Areas
• Applying Personhood Status to the Flathead River
Federal Government
• National Park Reserve
• National Wildlife Area
• Canadian Heritage River System
• Species at Risk Act
• Providing funding for purchase of private land for management by Land Trusts
Provincial Government
• Provincial Park expansions
• Wildlife Management Areas
Page |iii
Elk Flathead Conservation Options
• Ecological Reserves
• Wildlife Habitat Areas
• Highway 3 Overpasses and Underpasses
• Heritage River – BC
• Environment and Land Use Act
• New wildlife corridor regulation (under development)
• 2017 Canada – British Columbia Agreement on Species at Risk
• Encouraging the Regional District of East Kootenay (municipal government) to adopt
BC’s Riparian Area Regulation
The report includes a listing of known funding sources to help deliver the options for conservation.
As with many issues related to conservation, there is a real sense of urgency around making decisions – wildlife populations in particular are on the decline in Southeastern BC. Consideration should be given to placing selective short-term moratoriums on industrial activities in areas that are deemed by the federal and/or provincial governments and /or the Ktunaxa Nation to be critical to the future of conservation in the Elk and Flathead River drainages.
As is often said by Indigenous Elders, we owe a healthy environment to the next seven generations that are following us…