Walking and paddling distance about 14 km 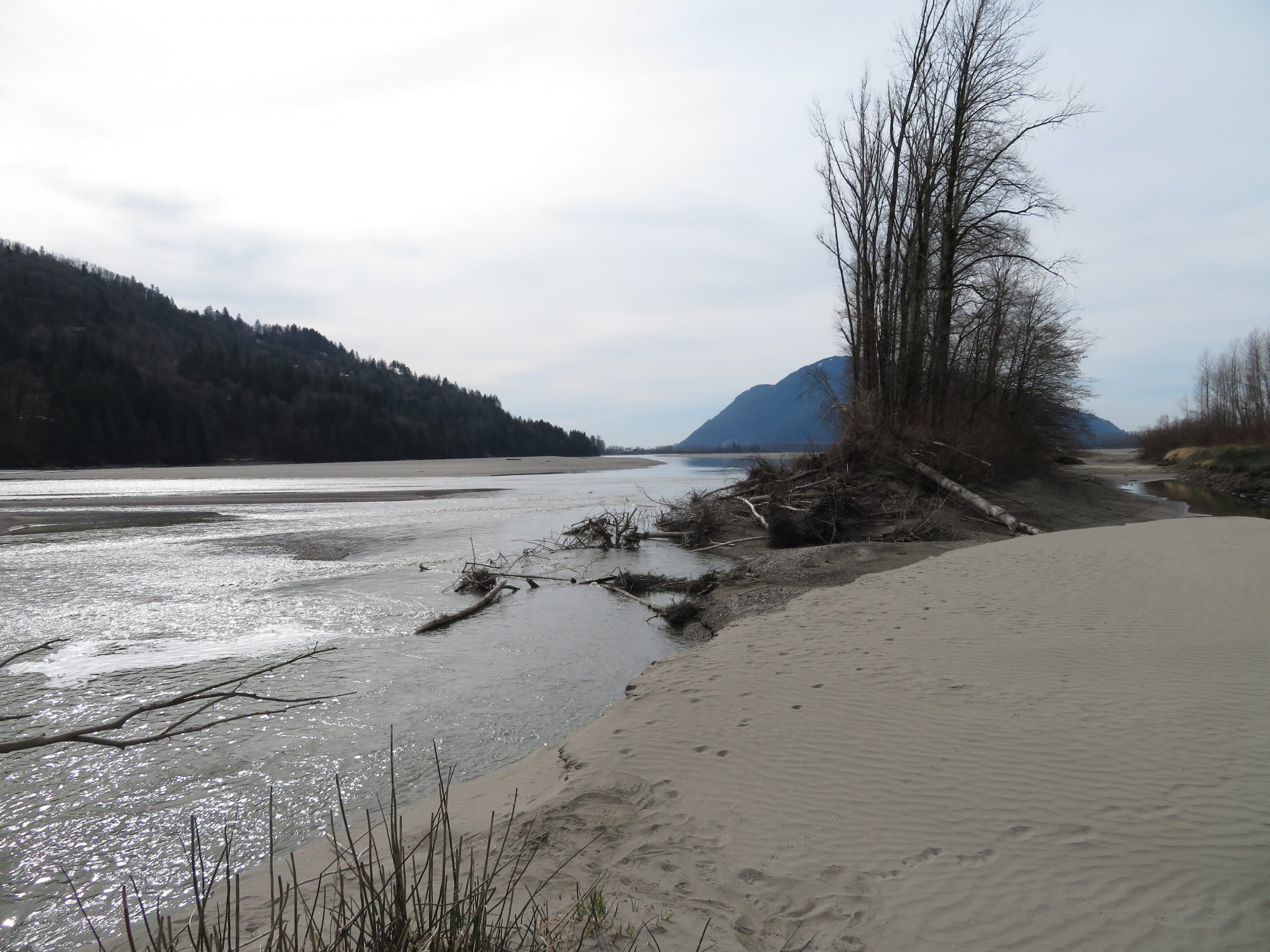 See a great set of photographs by Bill and Bev below.

The water level was the lowest that we have yet experienced during a visit to this ER; likely due to this being the earliest spring date we have visited, plus cool temperatures have continued through March, so snow is not yet melting. Compared to the water level during our visit last October, the Hope gauge showed the level about 1.4 metres lower today. Today’s weather with sunny with temperatures up to 12o C, so was a lovely day to explore the islands.

During our visit last October, we noted that the concrete boat launch ramp on Nicomen Island had eroded considerably and its concrete slab was cracked substantially, likely resulting from the 2020 high freshet which continued over two+ month period.  Heavy machinery has since been used to break up the remaining concrete slabs, and these are now piled adjacent to the old ramp location. Today’s low water level required a short but steep climb down to the river. The current on the river was minimal, which made it an easy paddle directly to the closest island. The low water also shortened our paddle distance to reach the now extensive gravel bar which extends out towards the launch point on Nicomen Island.

The low river level meant we were able to walk around all the islands, following the dry former inner channels or swales without additional paddles across deep channels. We walked a large ‘circle eight’ route around the islands, covering the lower islands first. In additional to the extensive amounts of gravel that had accreted during the 2020 freshet, the low water revealed extensive amounts of sand deposited as coatings over gravel beds and in a few areas as high banks and sand dunes. In some areas silt and clay had been deposited, now dried into a hardpan type cracked surface. The sand areas revealed extensive tracks by deer and also coyote, including some that looked like some young coyote tracks.

The invasive blackberry (Rubus armeniacus or Himalayan blackberry) continues to expand through the mixed cottonwood – alder forest, growing up amongst the salmonberry and willow shrub areas. The smaller, vegetated channel of the lower islands was still walkable, likely kept so by the deer traffic, visible through tracks. The small pond in this swale once again had egg masses of amphibians — many Northwestern Salamander eggs and a few single eggs of Rough-skinned Newts, plus a few small salmon fry. The water level of this pond was very low and most of the egg masses of the salamanders were above the water level. We shifted a few to water pockets, but there just wasn’t much water remaining. We hope that predicted rain in the forecast will raise the water level in this pond.

The direction of the river flow current was opposite to previous years around the tip of the downstream islands. That is, today the water was flowing from the northern channel around the island tip southward to the larger river channel. The quiet water channel between the downstream tip and the accreting island to the northwest had no flowing water; it was an extensive back channel with only one opening downstream and no water flowing through. It was well used by loafing and feeding Mallards, Green-winged Teal, Common Mergansers and Trumpeter Swans. The beavers are active here too, with a house built against the shoreline (now dry). The beavers had dug a channel to access their house against the bank. They have also built a new house a little way out in the quiet water channel, anchored against a sunken log.

At the other end of the islands, the upstream tip of the upper islands, now has a steeper drop off, but with the lower water level, there was an extensive gravel bar exposed, plus a small gravel island just offshore in the northern channel. This provided good habitat for several birds, likely beginning migration: flocks of Green-winged Teal, Common Mergansers and Dunlin were feeding and loafing. The timing of this visit is about a month earlier than our earlier visits when we have previously seen the large flocks of Black-bellied Plovers in this area, and none were seen today.

Throughout the islands there was very little sign of human garbage – only one camp fire pit with several alcohol bottles and cans. This was sited on the shoreline facing the quiet waters along the northwestward facing side of the lower island. There were no signs of people in the reserve, but sunny weather had attracted large numbers of people along the river on its north and south banks, including the Regional Park at Island #22. Several helicopters and small planes flew over the islands throughout the day, one helicopter quite low and one plane buzzed the former channel in the center of the reserve. There was no sign of fixed-wing aircraft landing within the reserve — likely the extensive and intermittent bands of sand amongst the gravel deposits make the terrain unsafe for fixed winged aircraft landings this season.

We looked for an eagle at the new nest (located about 20 metres northwestward from old nest in the centre are of the reserve). Two adult eagles were seen flying, as well as two immatures eagles and later all four were seen together in one location. Then near end of the afternoon as we departed the islands, we did see an adult eagle sitting in a branch adjacent to the nest, so the nest may be active.

Many coyote tracks, including what looked like a young coyote

Birds have been entered on eBird at hotspot:

Canada Goose 300 flying over in one very large flock

Dunlin 20  feeding in shallow water off upriver tip of islands

Bald Eagle  2 adults and 2 immatures; one adult was perched near nest tree towards end of day

Red-tailed Hawk 1   seen in three different locations, including two different perches, so there may be more than the one and there may be a nest on the islands 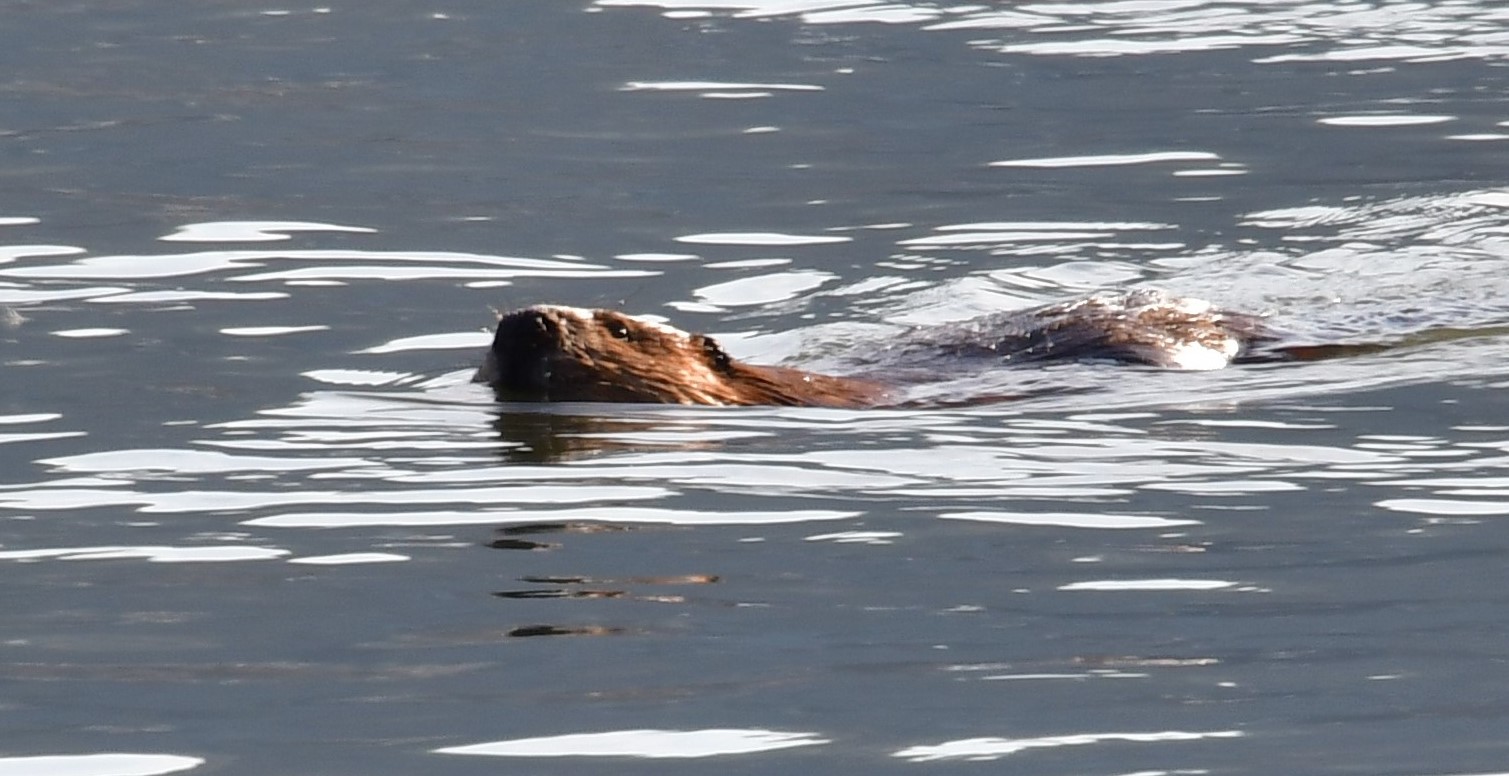 Lots of beaver activity around the islands 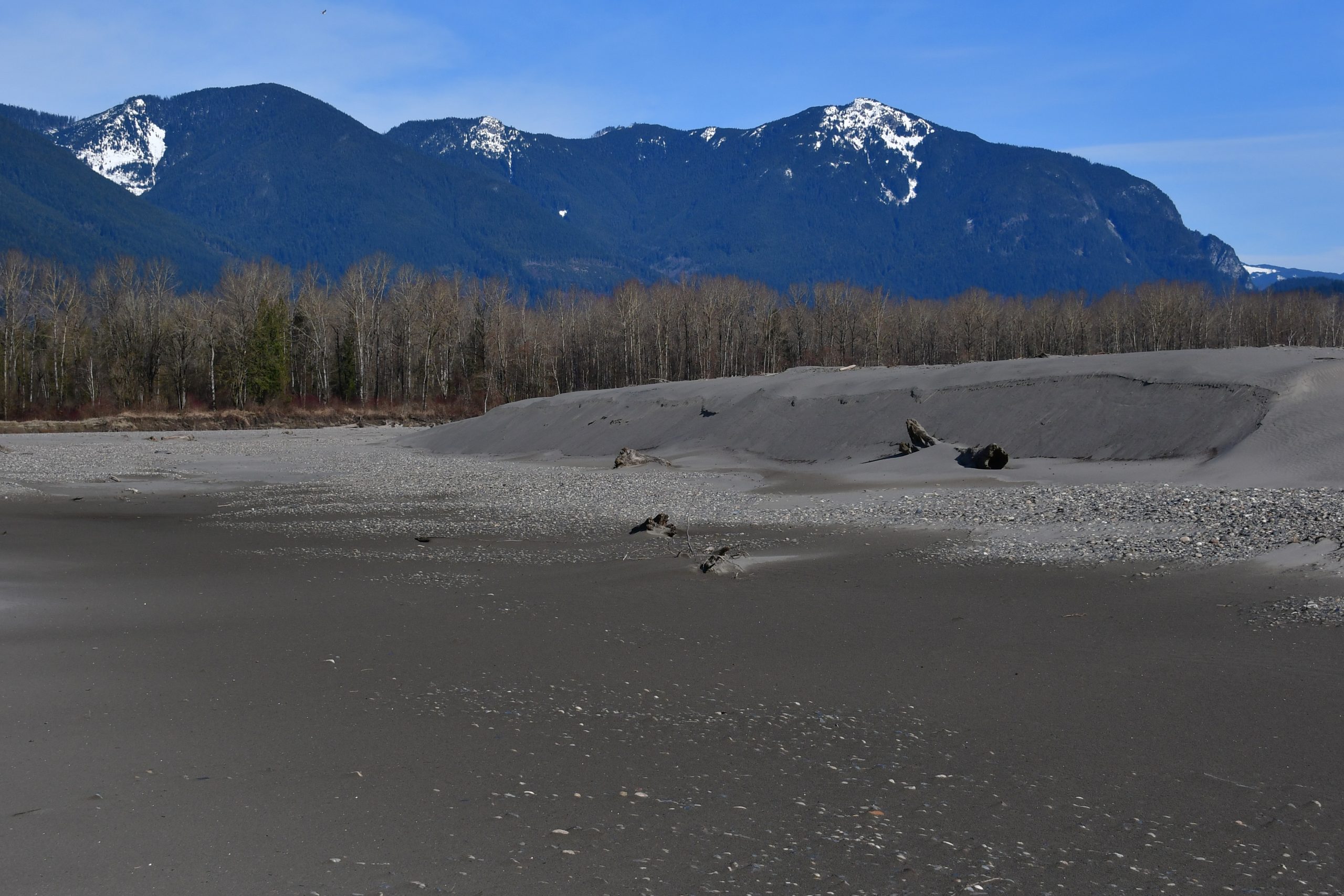 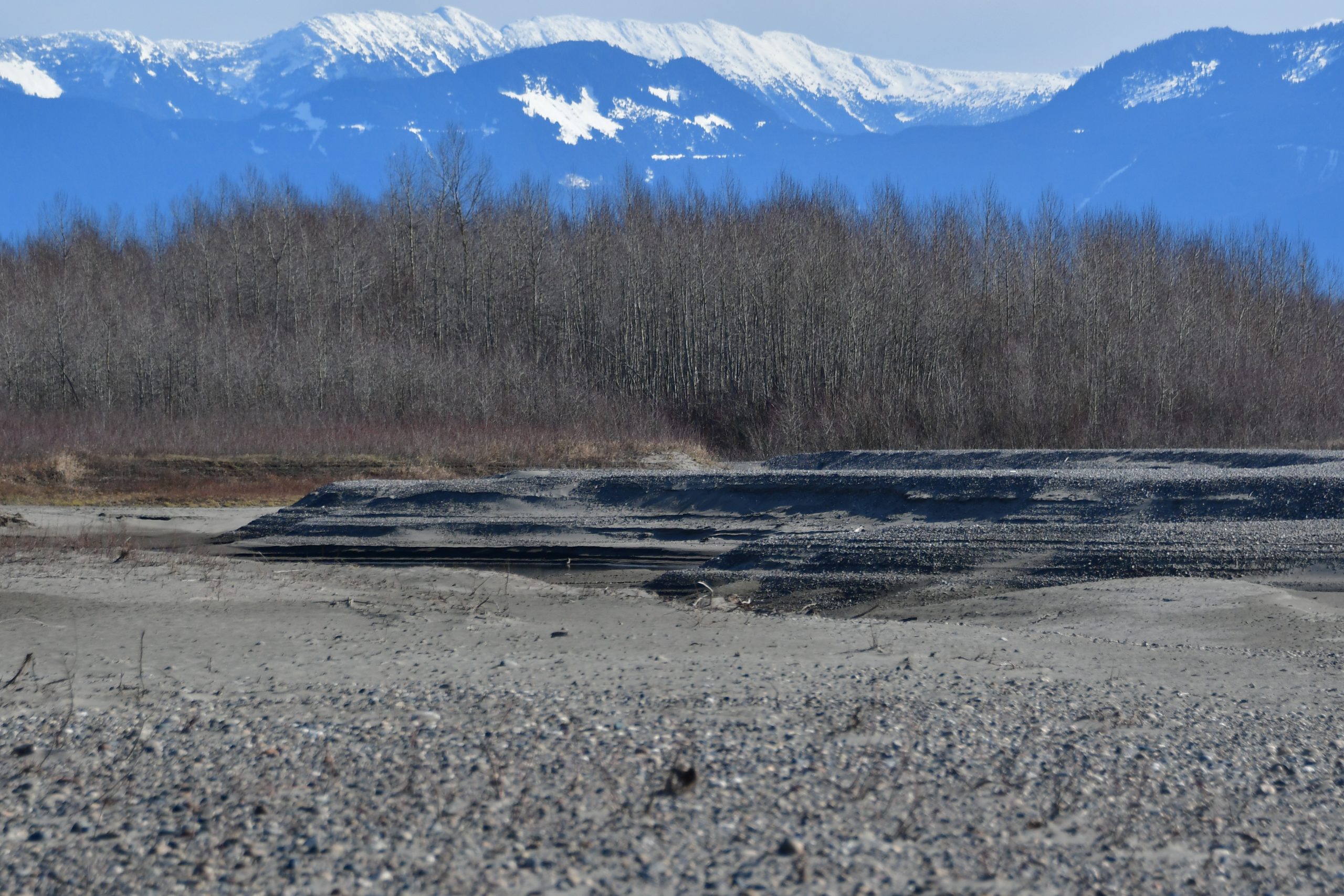 Gravel banks deposited by the freshet waters; the curving shapes following the river’s currents and back eddies 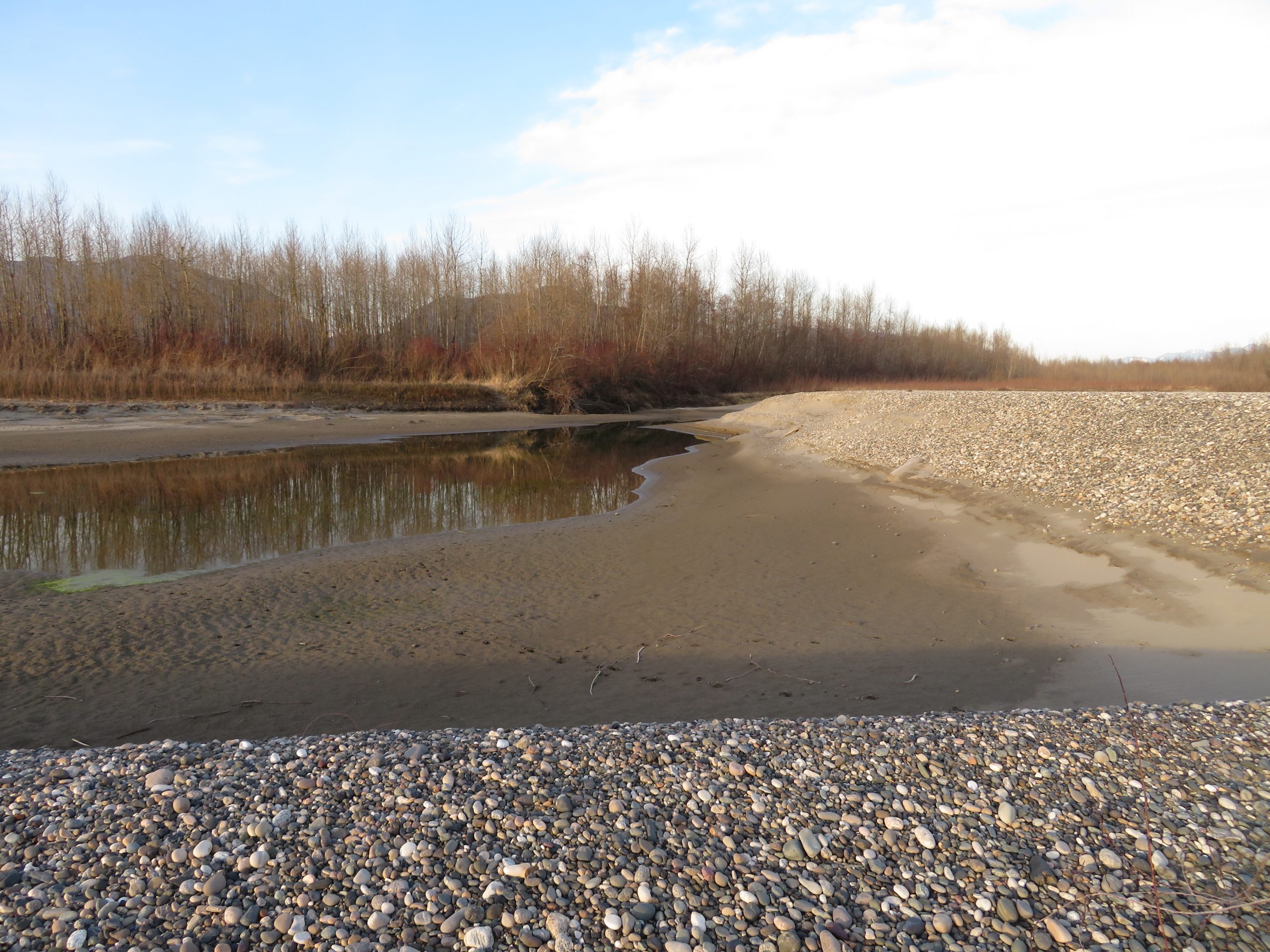 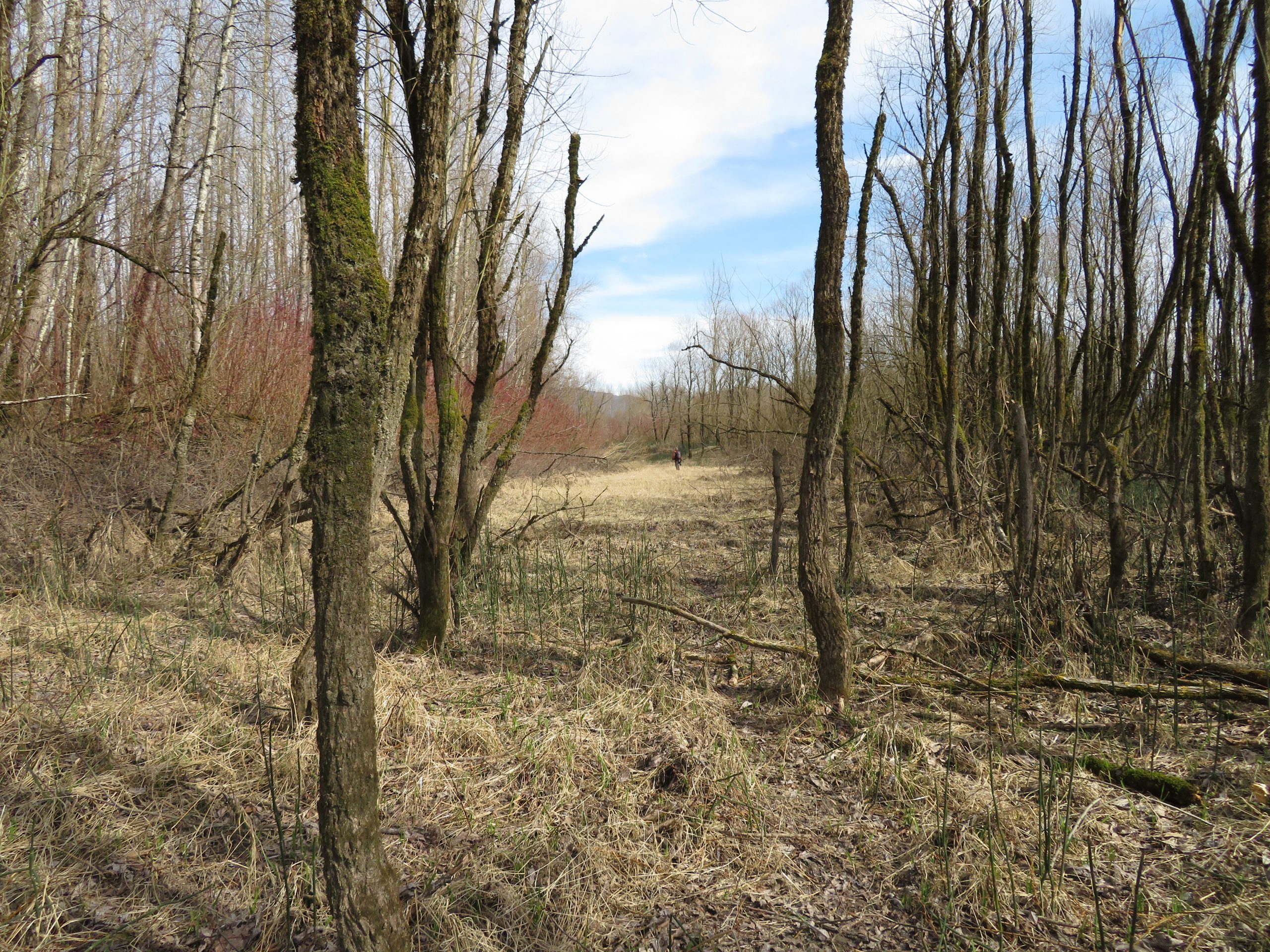 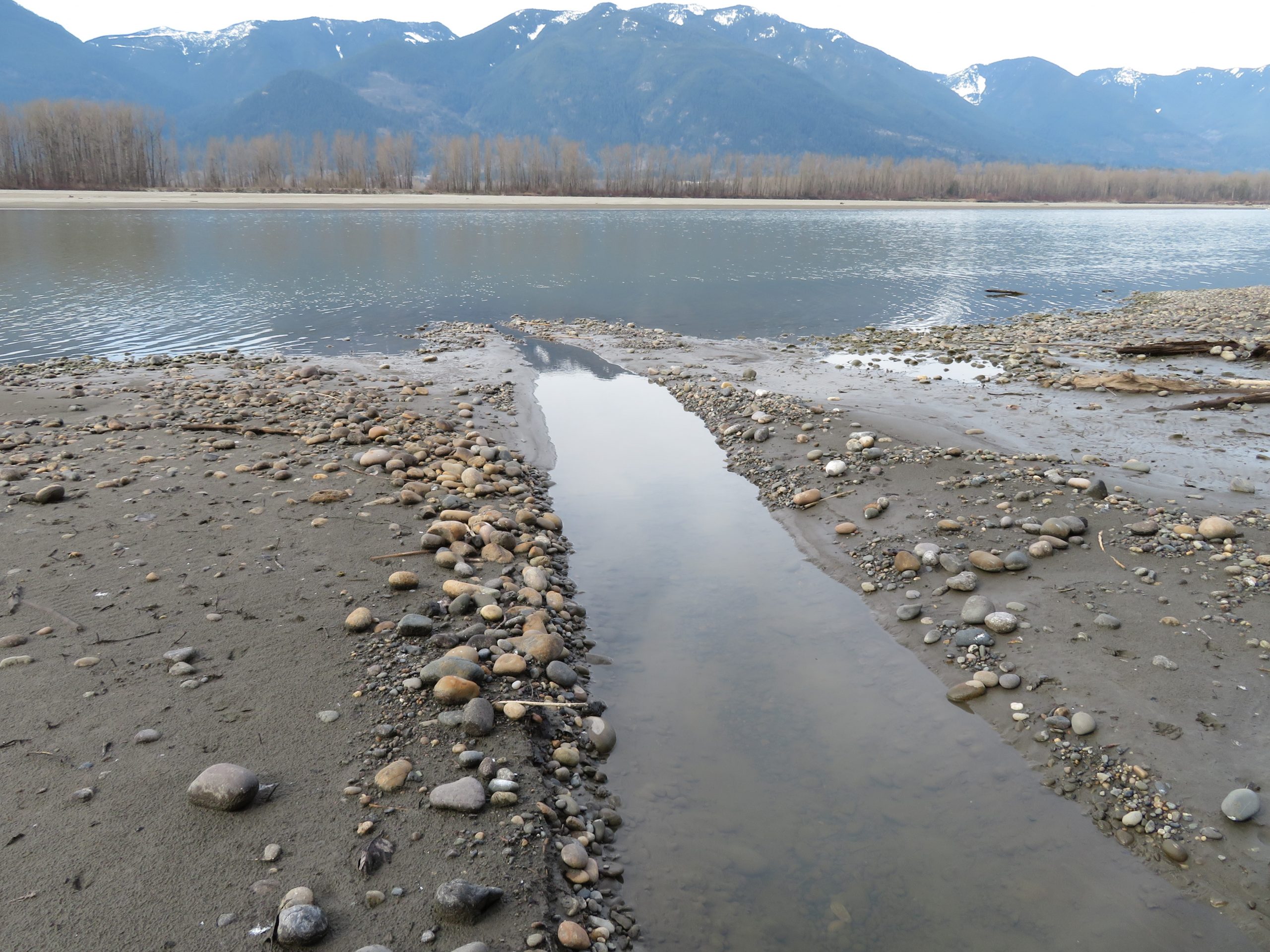 Channel dug by beavers from their lodge built against the bank of an island (now dry), out to the quiet water of the large back eddy 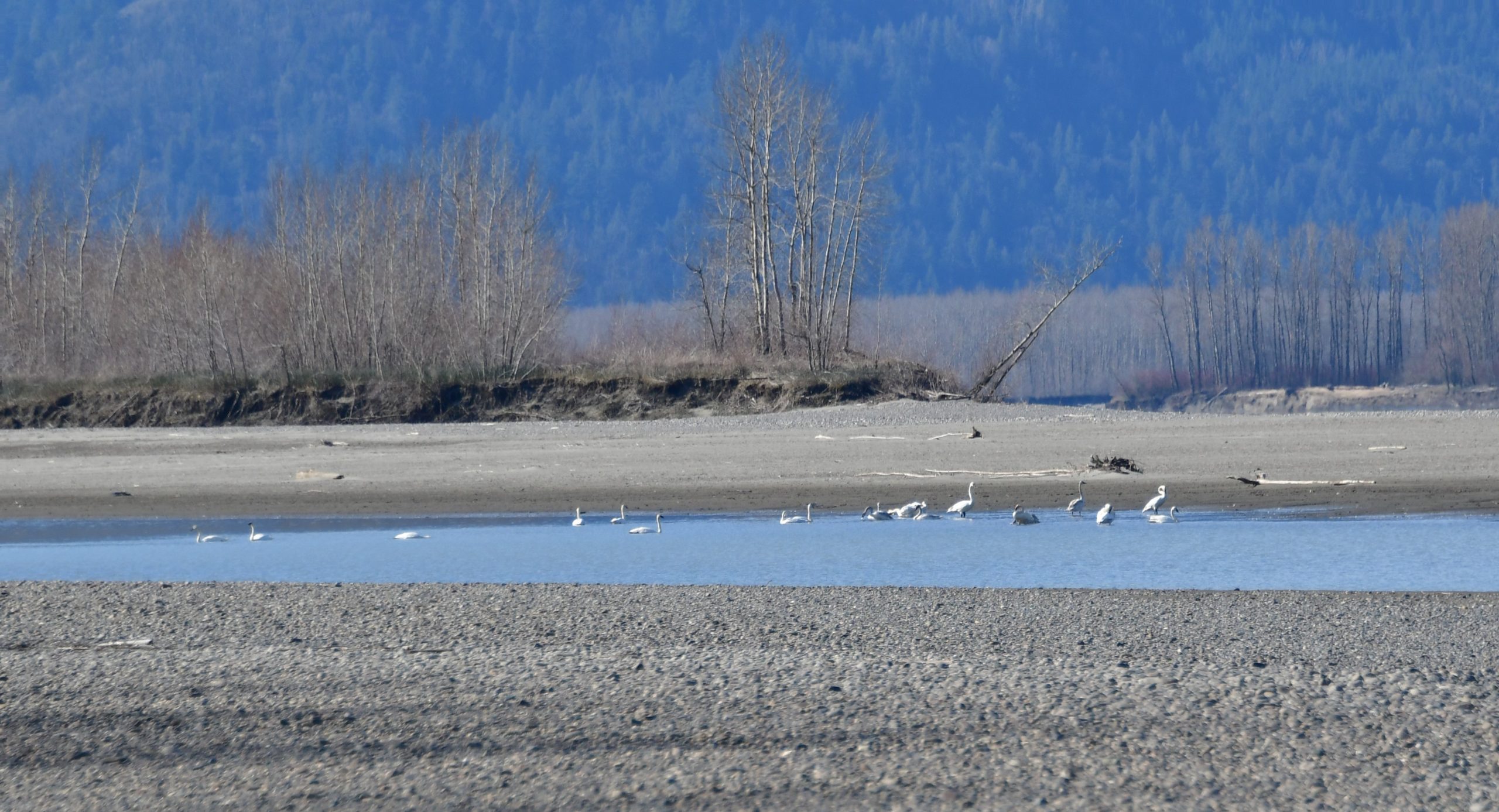 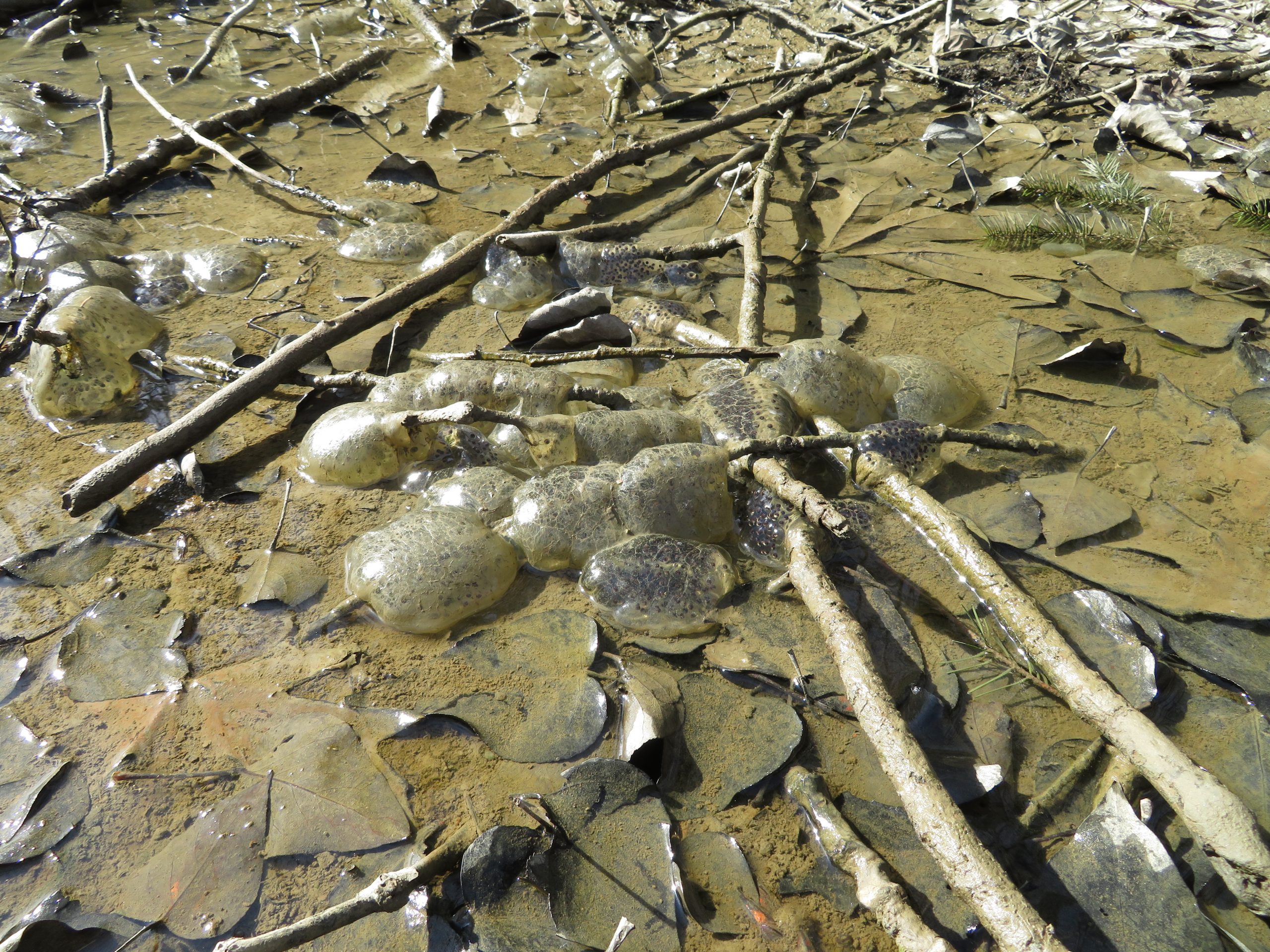 Egg masses of Northwestern Salamander, in drying pool of an inner channel 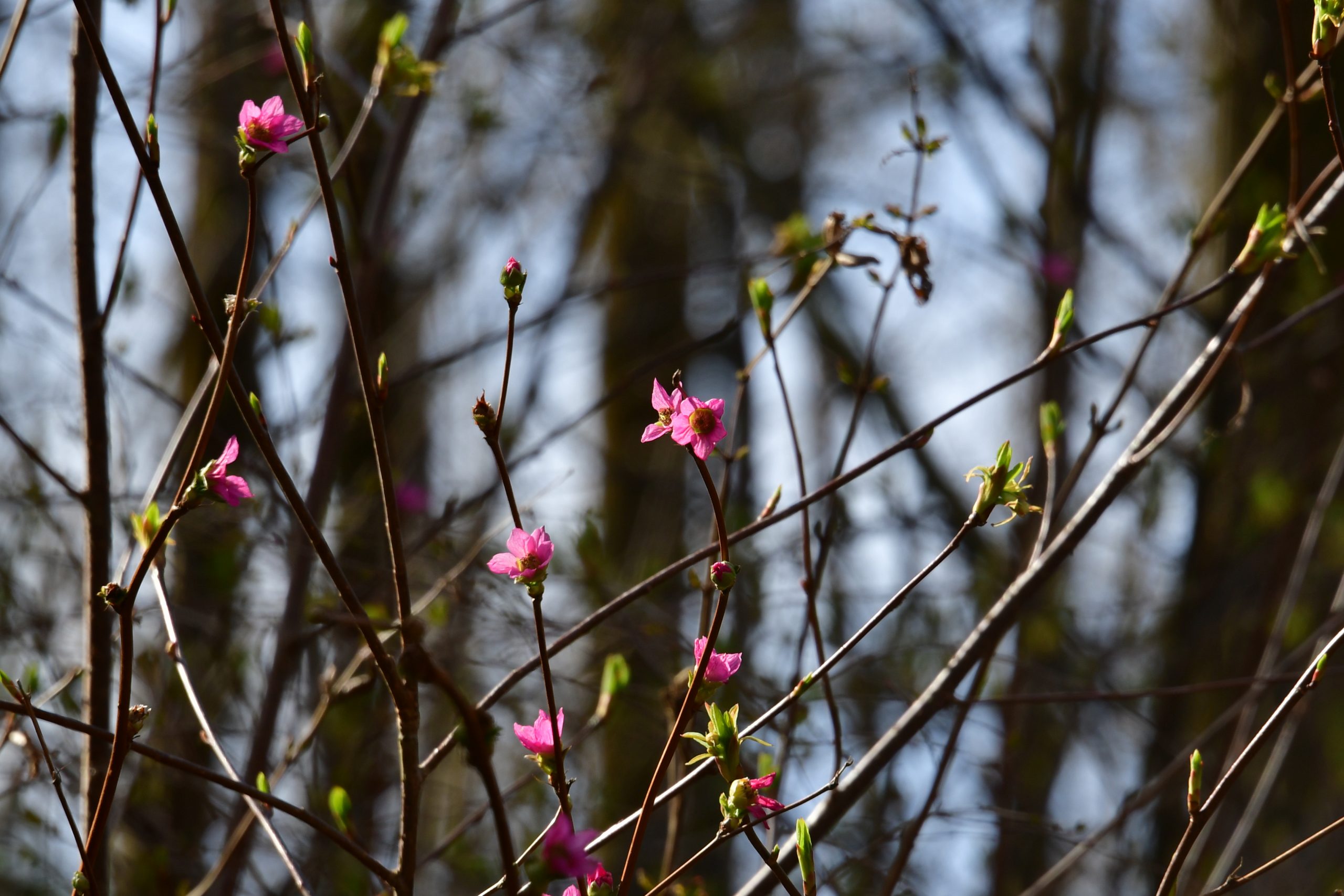 Looking downriver with Sumas Mountain in distant centre of photo; showing the narrow treed sliver of an island remaining from what had been an island about 50 metres across before changing currents eroded its southwestward facing shore and breached through this island 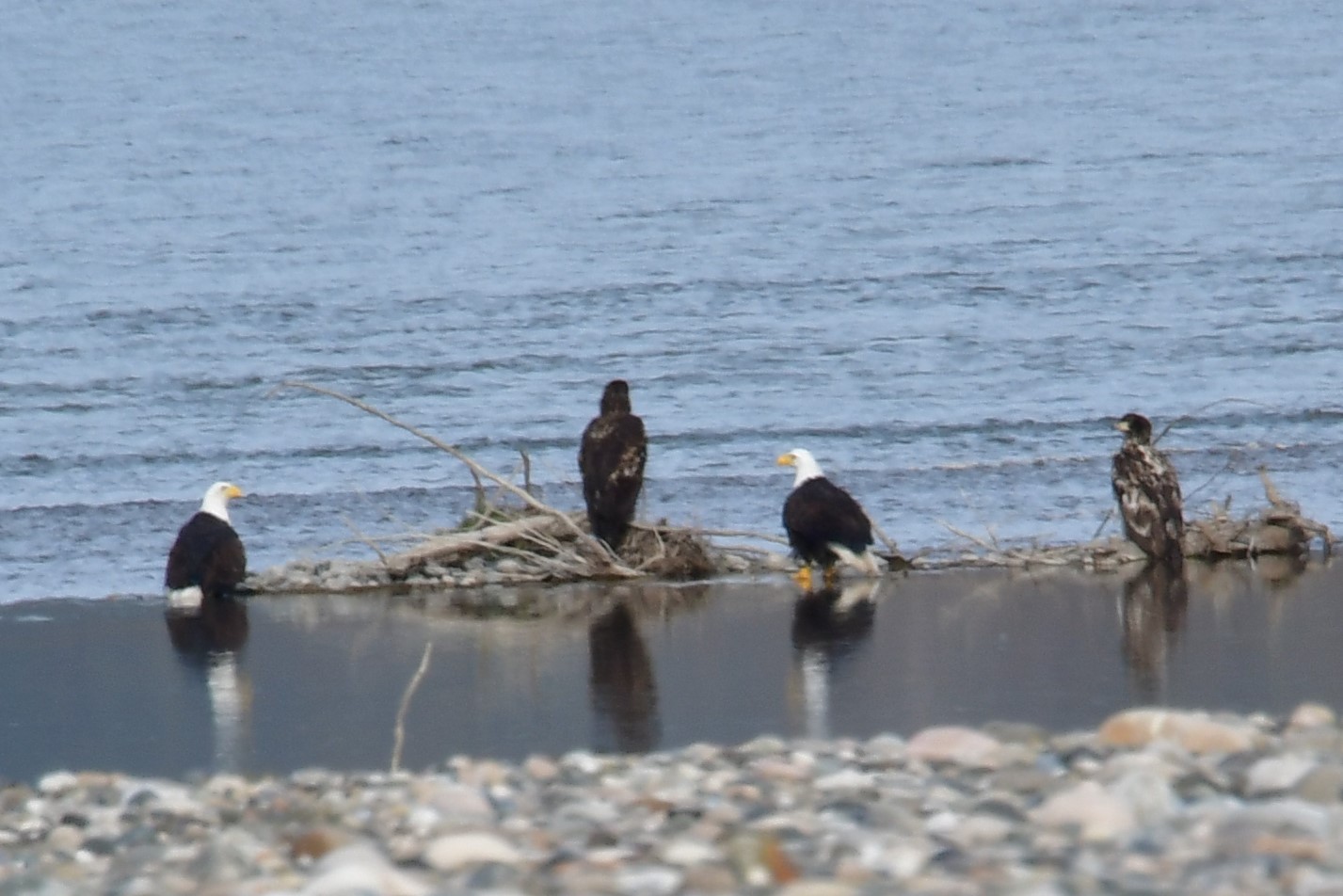 Eagles together, 2 adults and 2 immatures