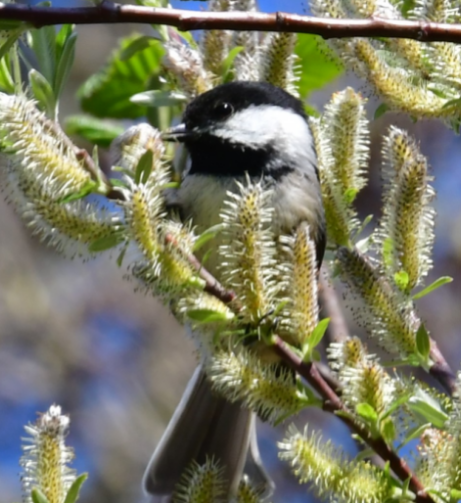 Black-capped chickadee… see the rest of their photos below.

Sunshine, 7 to 12o C, some distant clouds on mountain peaks and fresh snow at higher elevations

Calm to light breeze of 5 km/h

Walking and paddling distance about 12 km

The water level was slightly higher than our visit a month ago, and this provided a better eddy for launching at the former boat launch on Nicomen Island. The water level was still relatively low, which meant that river currents were not strong and most of the dry inner channels of the islands were dry and walkable. The bright sunshine, clear air, deep blue skies and surrounding snow-capped peaks made for a lovely day outing at the EcoReserve.

After landing we looked for activity at the Bald Eagle nest, but the nest did not look occupied. At one point during the day we observed an adult Bald Eagle perched near the nest, but it did not stay there for long. This nest had been built two years ago, when the old nest looked to be in disrepair, but this new nest does not look active this year and the old nest looks increasingly in disrepair.

There was a large linear pond, about 500 metres long x 10 metres wide and surrounded by gravel and sand banks, so not connected with the flowing river. In mid-morning we observed about 25 Tree Swallows flying, swooping and feeding above its surface. When looking later in the afternoon, the swallows were no longer flying at this pond, but had by noon concentrated their feeding along the main river channels on either side of the upriver tip of the islands. Their numbers had increased considerably and they had been joined by Violet-Green Swallows. It was challenging to estimate numbers as the swallows were in constant motion, but we estimated there were over 100 swallows, with about equal numbers of Violet-Green and Tree Swallows.

We began our tour by walking upriver towards the tip of the upper islands, passing by the Owl Sand Dune. The Sand Dune area showed extensive digging by coyote(s), where many holes about 20 cm deep had been dug throughout a sandy area about one-third hectare in size, amongst young cottonwood seedlings (about 1 to 2 metres high) and horsetail (equisetum). Holes had been dug over several days, if not weeks, as some of the diggings looked fresh, while other holes were aging back into the sand. We think the digging may be for the large larvae that we had previously found in this area in late March 2017, when we’d observed similar shaped diggings. Based on the tracks we figure this digging is by coyote.

There were several birds loafing and feeding along the river’s edge as we headed upriver, including Common Mergansers and gull species, mostly Mew Gulls. Some looked like they were catching small fish in the shallow waters as we observed, through the spotting scope, silvery glints in the gulls’ bills.

We were however disappointed at the upstream tip not to find a large flock of Black-bellied Plovers (150 to 275 had been observed in three previous years during dates similar to today’s). Instead we saw only one BBPL. We checked shorelines throughout all the islands, but no plovers were seen elsewhere. However, one Greater Yellowlegs was observed feeding along the shoreline of a downriver island. The hundred plus swooping and feeding swallows (Tree and Violet-Green) flying above the two main channels at the upriver tip were a pleasant sign that spring has arrived. Possibly the past month of colder spring weather, strong winds on the previous two days and the two to three-week delay of shrubs and trees leafing out, have delayed the migration of the Plovers.

At the lower water level, we were again able to walk all the inner swales and channels of the islands. After crossing the now wide and dry central channel, we headed downriver on the north facing side of the lower island. We could see in the distance a few hundred mallards and widgeon loafing and resting in the quiet water and shoreline of the accreting island to the northwest. The dabbling ducks were soon joined by hundreds more, who flew overhead from the Nicomen Island area and landed. We then observed across the river channel on the Nicomen Island dyke four young ladies, riding horseback English style, together with about 20 beagle hounds. They headed their horses off the dyke and out of sight, down onto the farmer’s field, so likely they had disturbed the ducks that had flown our way, to a safer resting location. These dabbling ducks were again disturbed by an adult Bald Eagle that flew overhead, but once the eagle had passed, the ducks returned to their loafing in the quiet inner back eddy between the Ecological Reserve Island and the accreting island to the northwest.

We next walked back upriver through the inner channel between the two lower islands. At its upper end, we next cut through the woods along the smaller, vegetated swale that crosses the largest lower island. At its small pool we looked to see the condition of the egg masses of amphibians that we had seen last month. The water level was slightly higher than a month ago and there appeared to be more Northwestern Salamander egg masses, so hopefully with the Fraser River water level now rising, some of these eggs may hatch. Several of the egg masses were covered with green algae.

Throughout the day there was considerable small plane traffic overhead; it looked like recreational flying, so perhaps the large number was due to Sunday holiday outings, plus spring sunshine.

Extensive deer tracks plus a sighting of an adult blacktailed deer

(similar shells have been found in previous visits, usually one or two a visit)

Spider (many were running quickly in sandy areas, then would abruptly stop)

Birds have been entered on eBird at hotspot:

Bald Eagle 2 adults, but not together; nest in tall cottonwoods did not look active

Ruby-crowned Kinglet 9 seen as pairs or alone, appears to be a spring migration 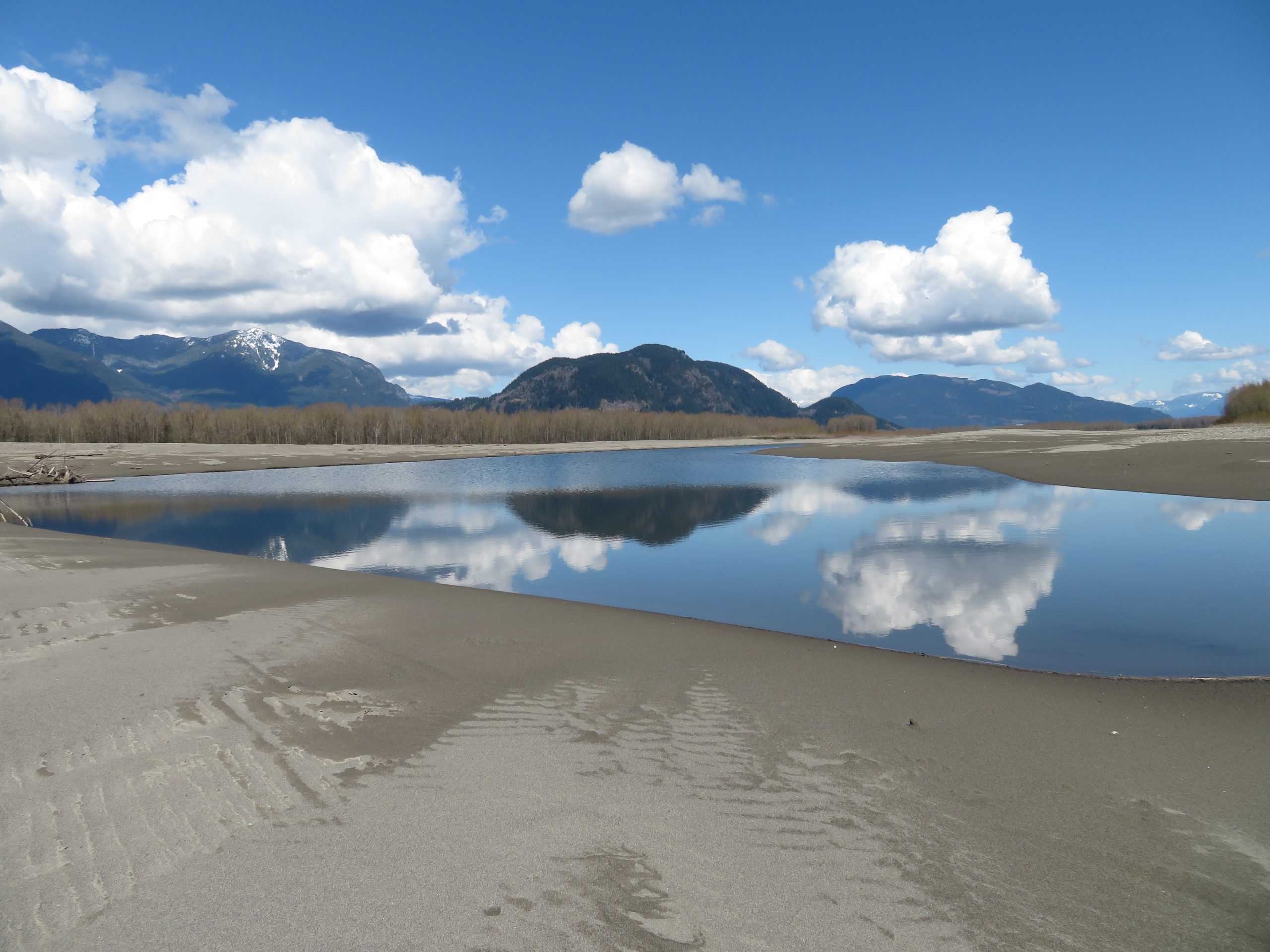 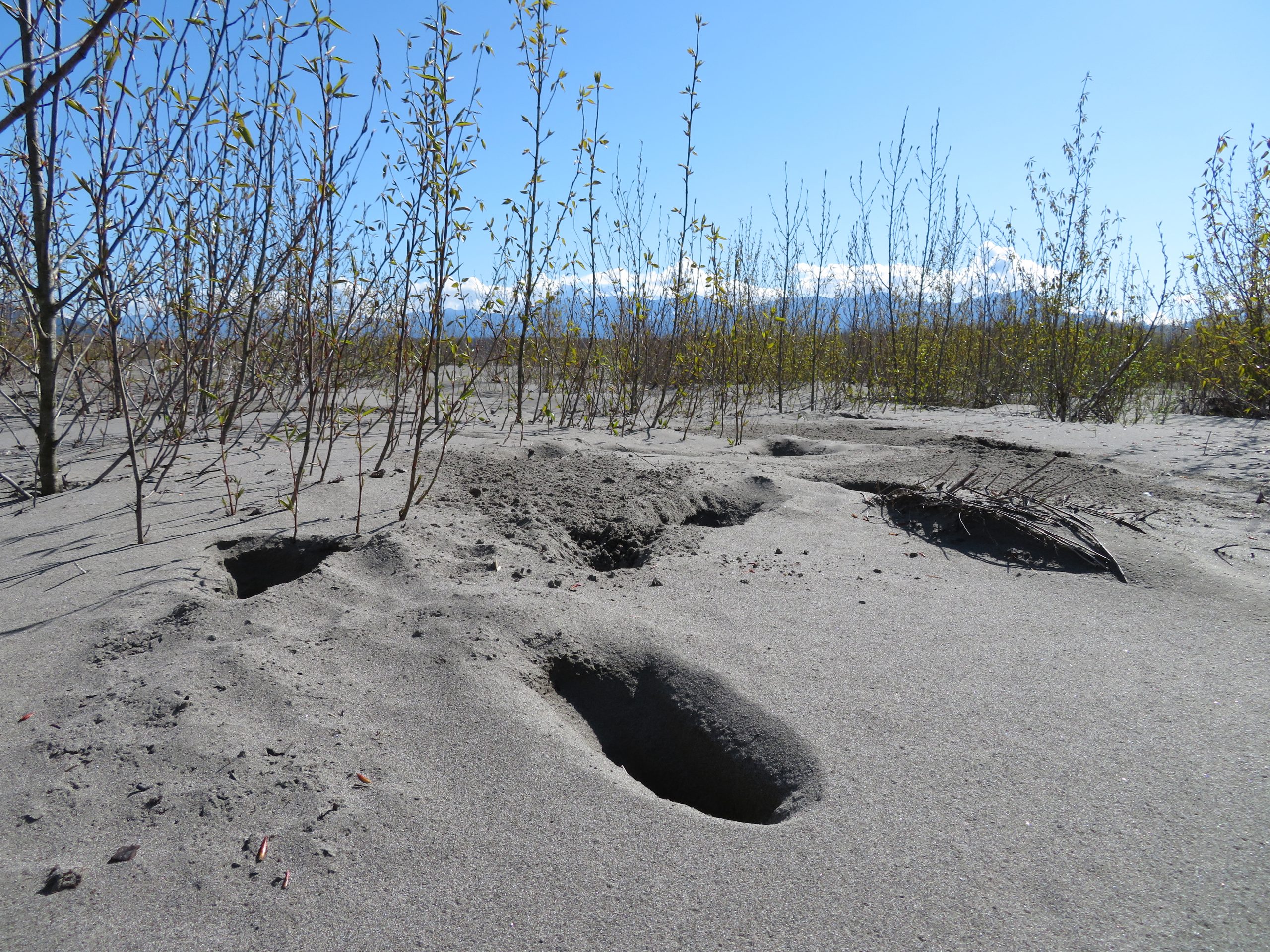 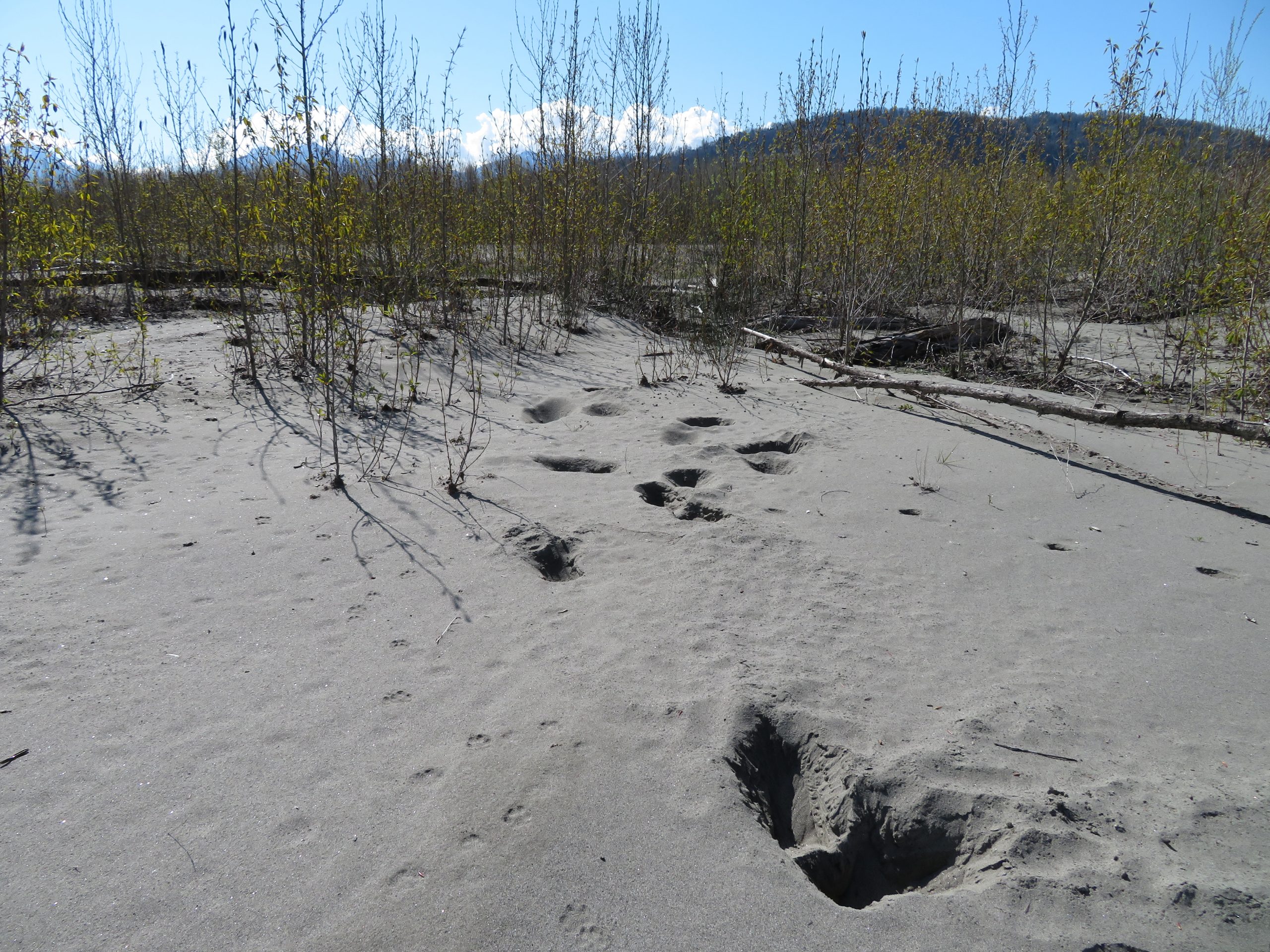 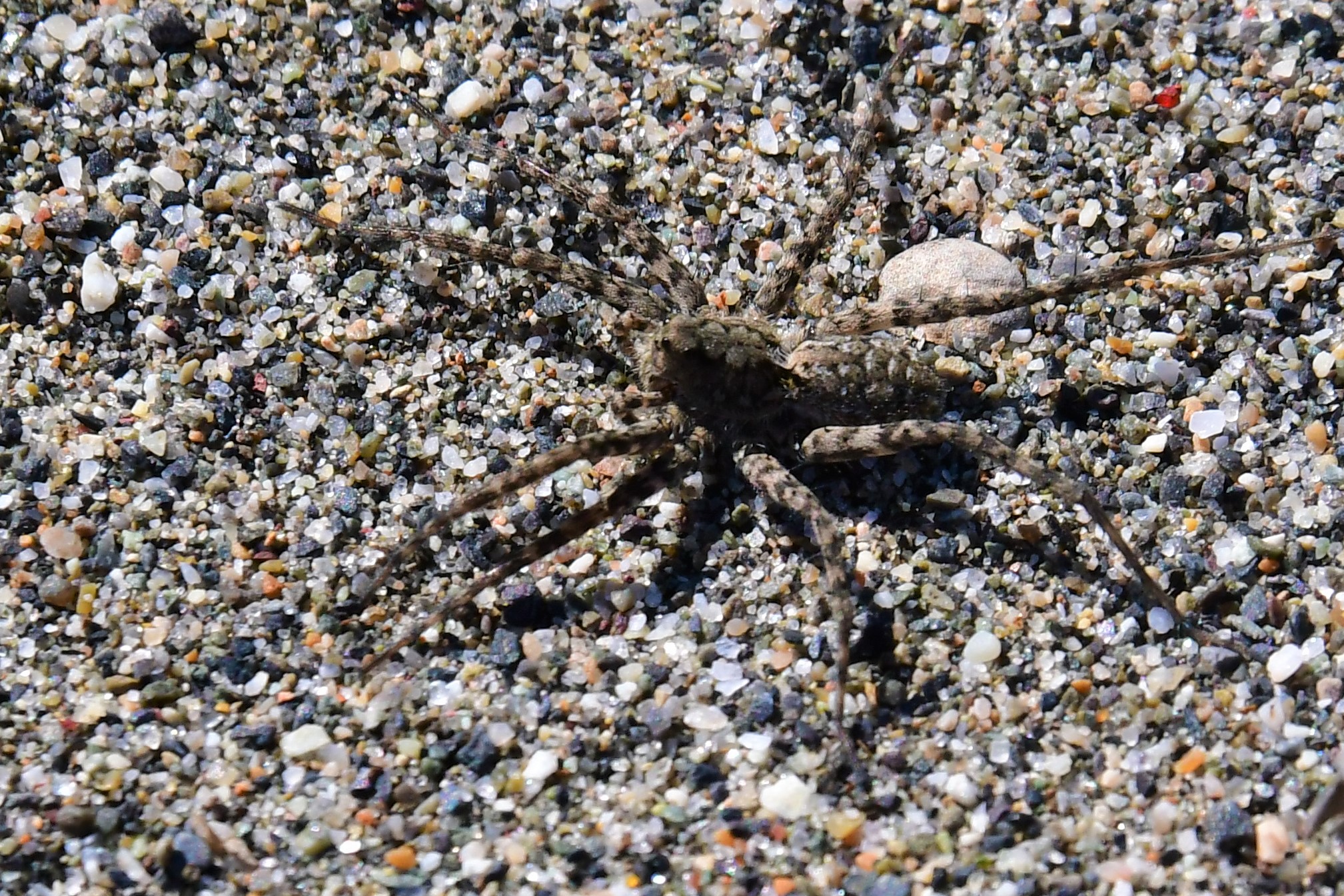 Several of these spiders seen, would run quickly, then stop abruptly 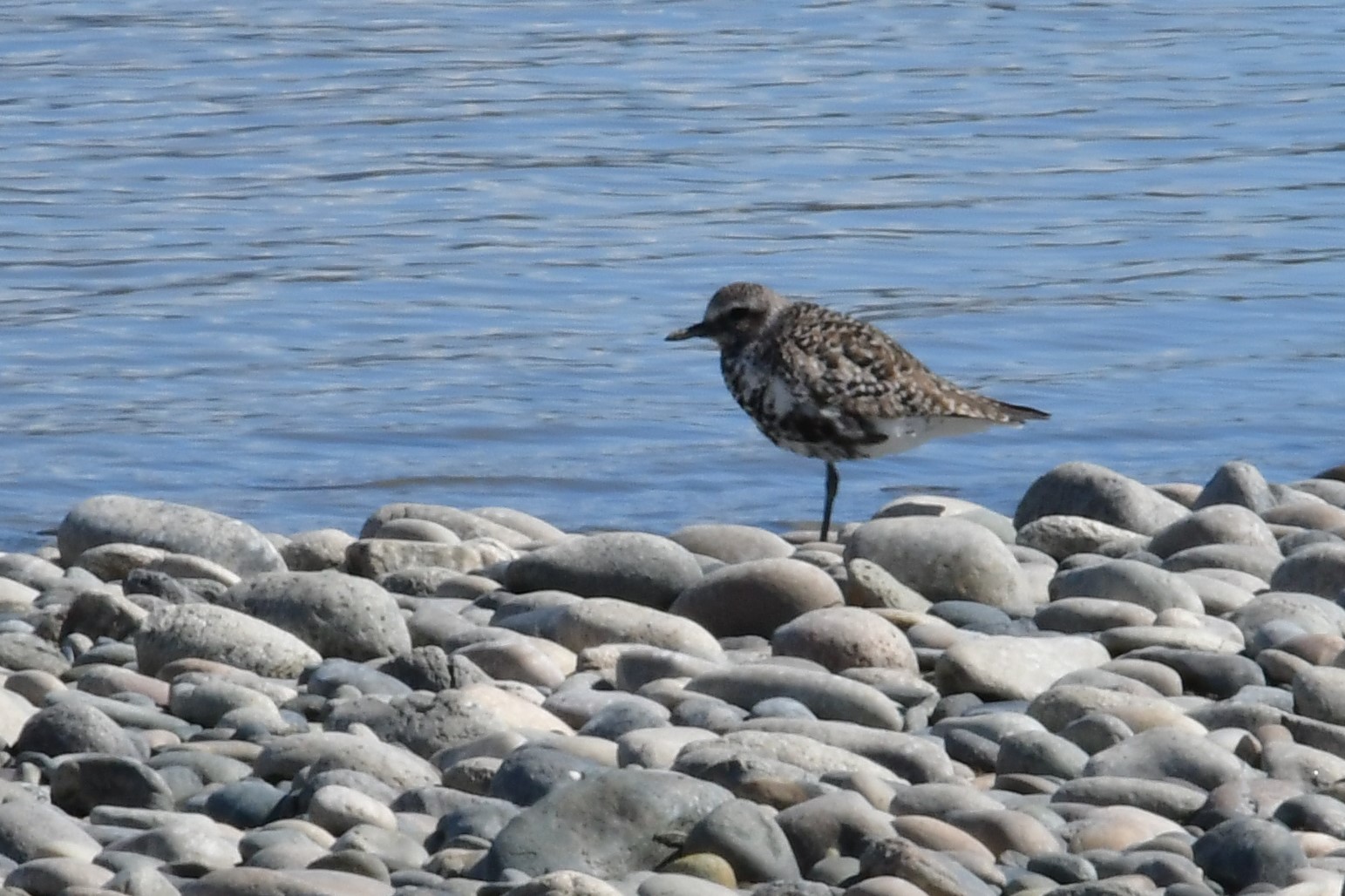 Lone Black-bellied Plover at up river tip of islands 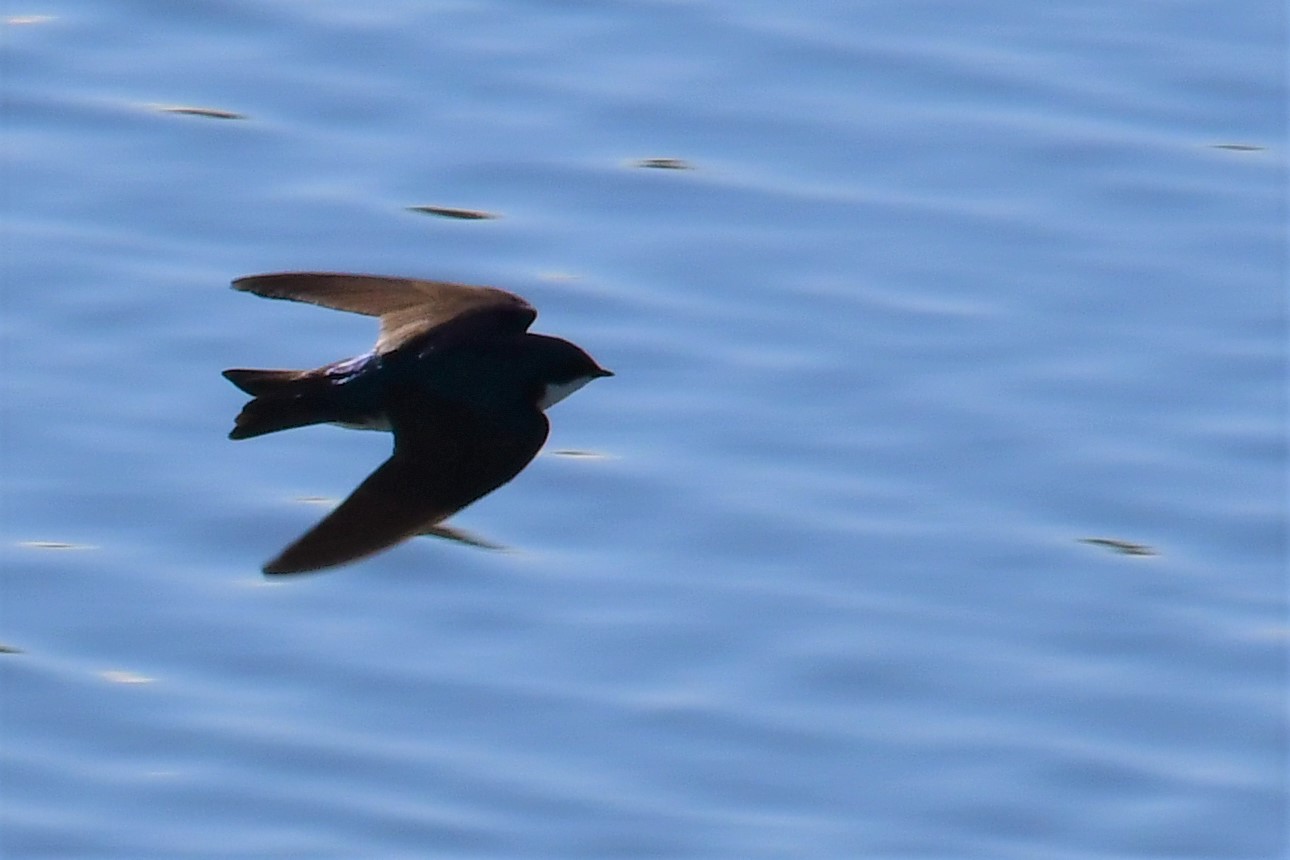 Lots of Tree Swallows flying over main channel of Fraser, together with Violet Green Swallows 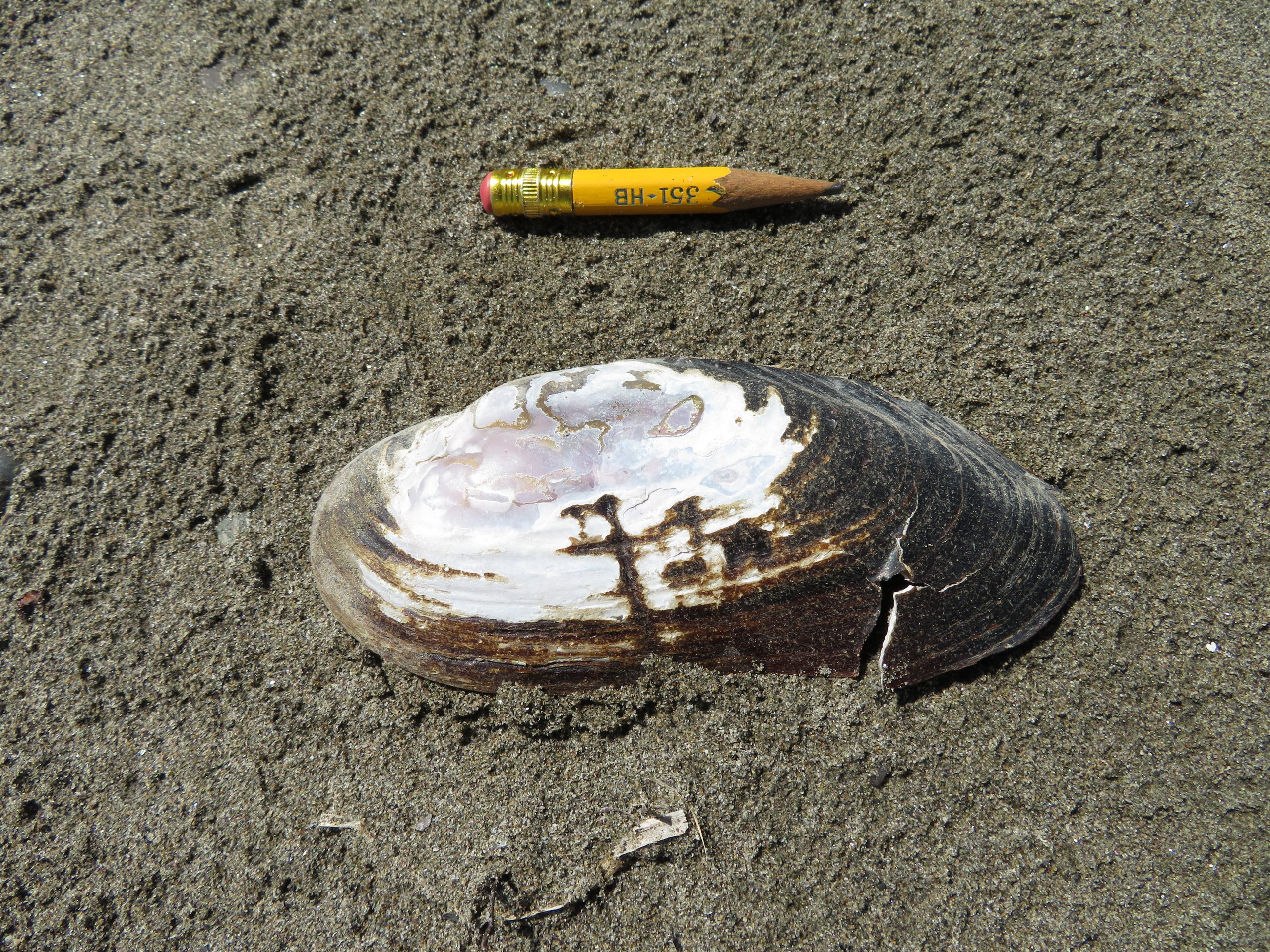 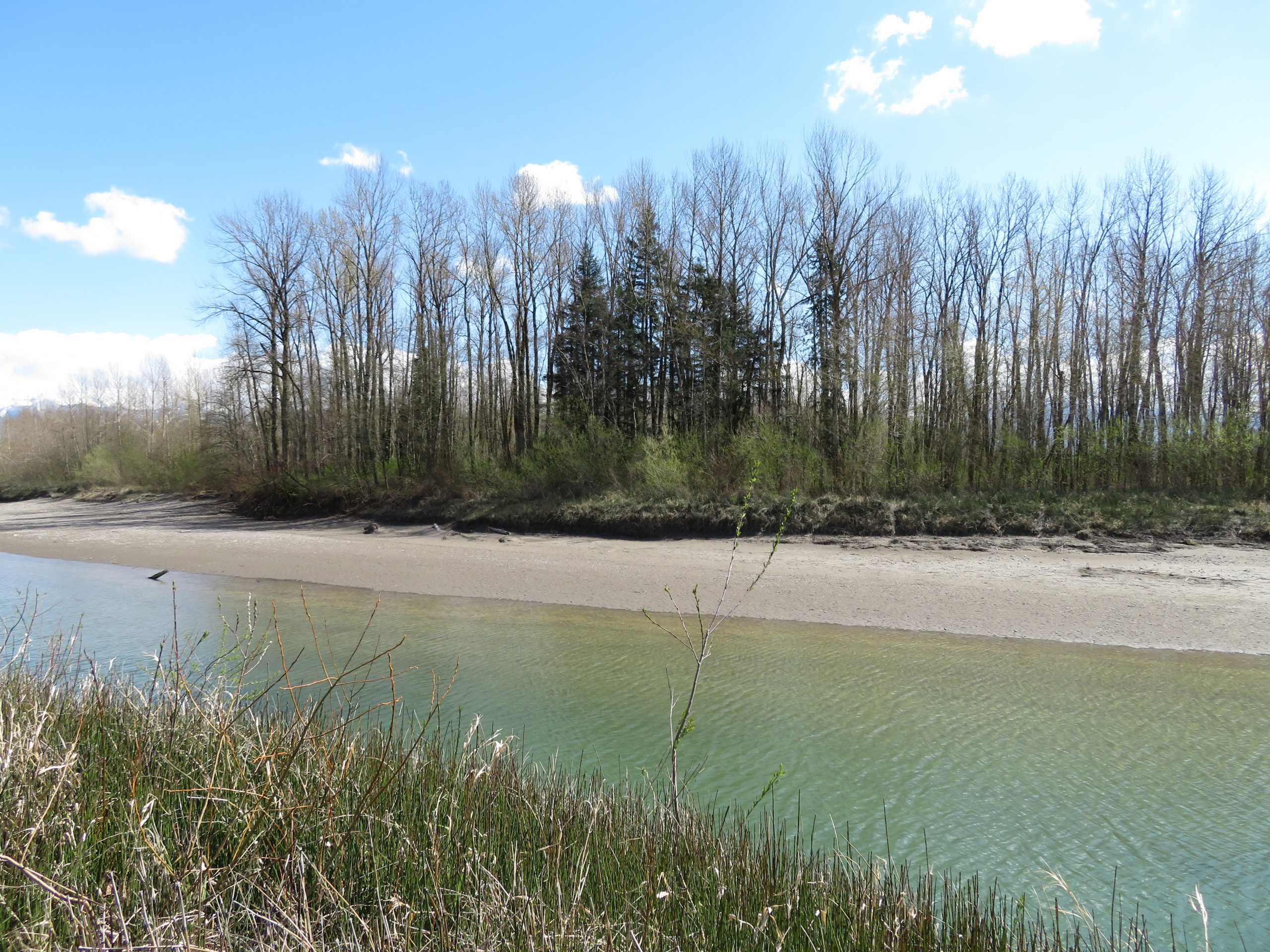 Pool in inner channel, conifers can be seen amongst the deciduous trees on far island. 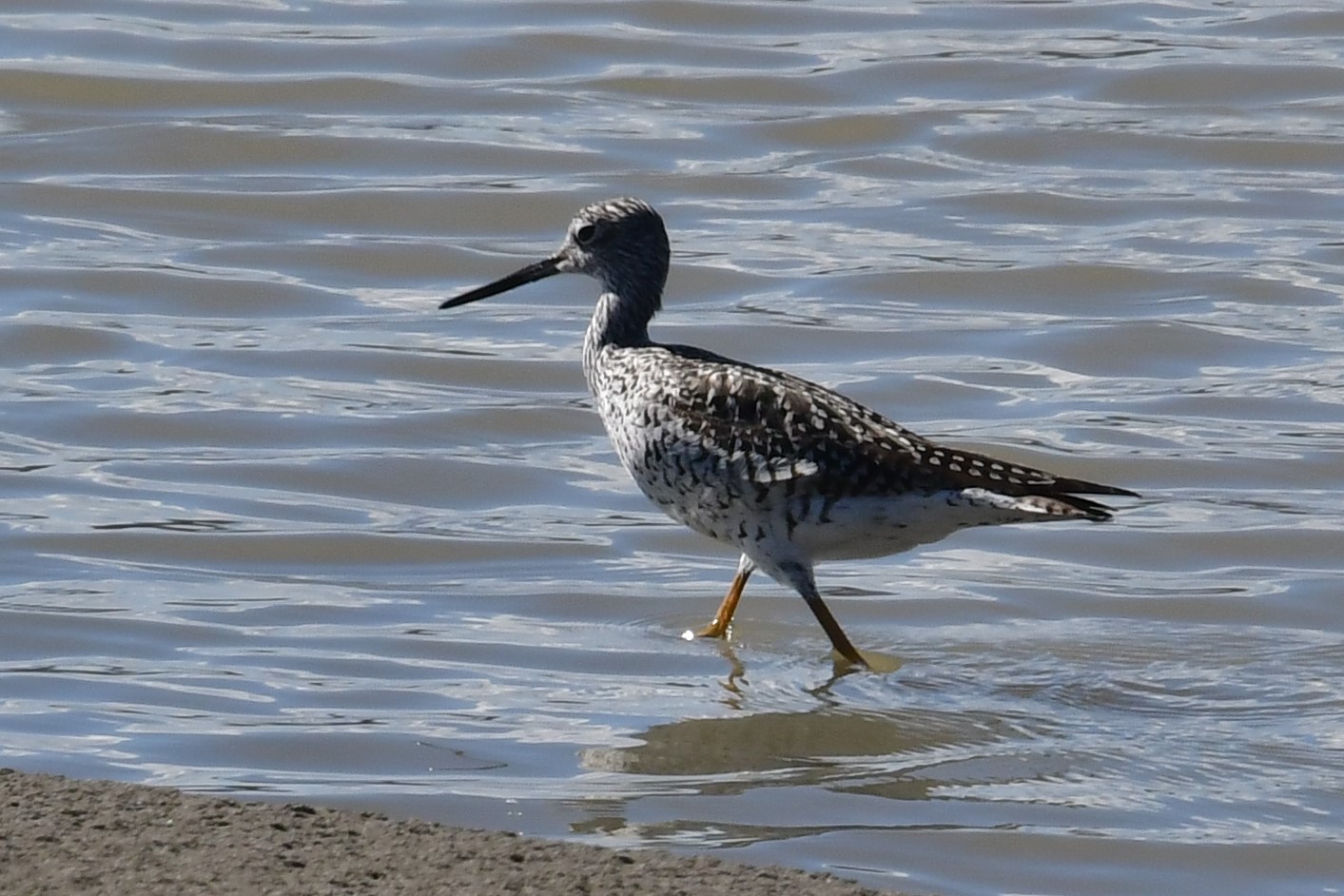 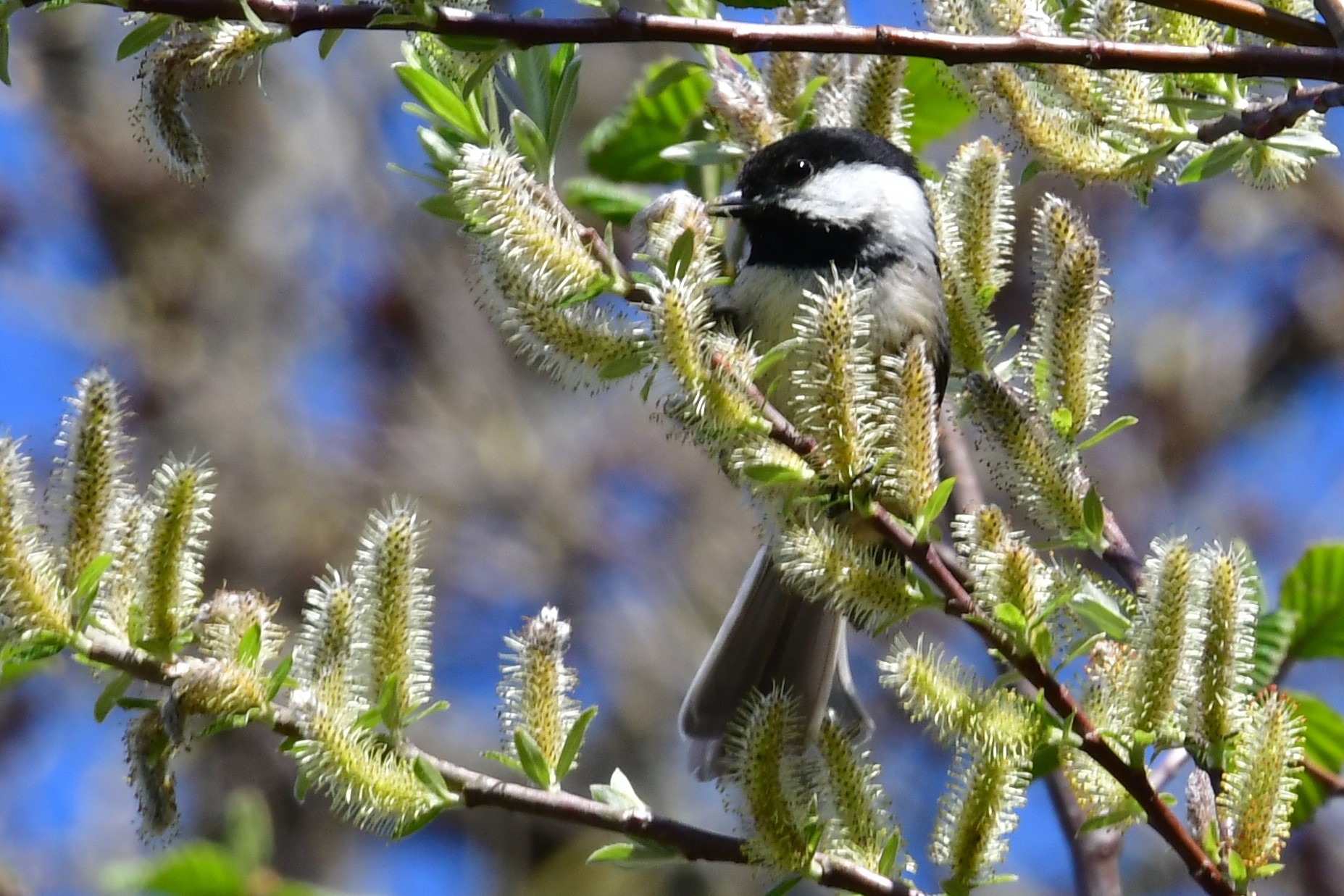 Black-capped Chickadee feeding amongst the catkins of shrub willow