Peter Courtney, who along with George Scotter and the Central Okanagan Naturalists’ Club botany group have documented the plants found in the Browne Lake Ecological Reserve near Kelowna. He sent warden Don Guild his updated list of their findings. 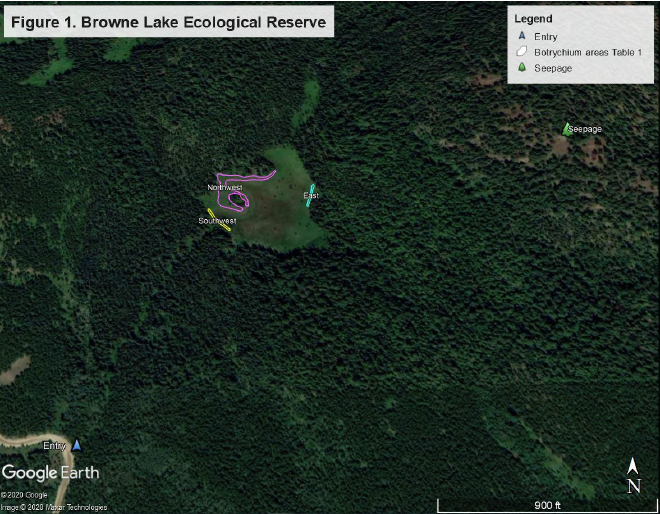 At the request of Don Guild, warden of the Browne Lake Ecological Reserve (BLER), the Central Okanagan Naturalists’ Club (CONC) began cataloguing the vascular plants of the BLER in 2015. Typically 2-4 visits were made per year by members of CONC, often accompanied by the warden. Photographs were used to assist with initial plant identification and later verification. This report includes a working list of the vascular plants and summarizes counts done on moonworts (Botrychium spp and Sceptridium spp).

According to the Purpose Statement “The primary role of the Browne Lake Ecological Reserve is to protect a small wet meadow ecosystem and surrounding forest in the Interior Douglas-fir-Montane Spruce transition. The wet meadow, once used as pasture, is reverting to the original sedge community. A rock outcrop on the central hill holds a small seepage influenced community ….”

CONC identified 229 species during the 2014-2019 (June 13-Aug 29) periods as listed in the Appendix. The area surveyed included the meadow, the runoff area from the meadow to McCulloch Road, forested areas immediately surrounding the meadow and the hillside nearest the meadow, including the seepage-influenced area (Figure 1). Much of the forested portion of the reserve is covered in dense deadfall making getting around in those areas difficult, and there are no trails. There are large forested portions of the BLER that CONC has not visited.

The greatest diversity of plants was found in the transition zone between meadow and forest and in the runoff area between the meadow and McCulloch Road. There are small pockets of plants unique to the seepage-influenced area on the hillside, such as Lewisia pygmaea), Sanicula graveolens, Saxifraga occidentalis, Polygonum polygaloides ssp kelloggii, Hydrophyllum capitatum, Eremogone capillaris, and Orobanche uniflora. Even in dry years there was at least a small area of standing water containing aquatic plants such as Nuphar sp., Persicaria amphibia var. stipulacea, Ranunculus gmelini, and Sparganium emersum.

While no red-listed species of vascular plants were found, six species of moonwort were identified (Figure 2). One of these, Botrychium michiganense, is currently blue-listed. Moonworts are a group of ferns in the Ophioglossaceae family that bear their spore sacs on a specialized stalk rather than on green leaves as in most of the true ferns. Zika et al. (1995) recommended that any site with five or more Botrychium taxa should be considered highly significant and worthy of special management and conservation. Recognizing this uniqueness we have given special attention to determining numbers and distribution of moonworts in the BLER.

Detailed counts of moonworts were made in 2019 and 2020, often using tapes to section off areas where necessary. An initial visit in late May-early June helped locate growing areas before seasonal vegetation growth made finding moonworts difficult. Detailed counts were done in June-early July. A final survey in mid-August was done in shaded areas where growth was slower (eg. along the meadow’s edge) to find any late-blooming previously undetected individuals. Moonworts in all areas were checked for spore casting condition.

Photos of the ground cover in areas East, Southwest and Northwest are shown in Figures 3, 4, 5, and 6. In the meadow, grasses predominated whereas along the meadow’s edge, mosses were the main plant associate. 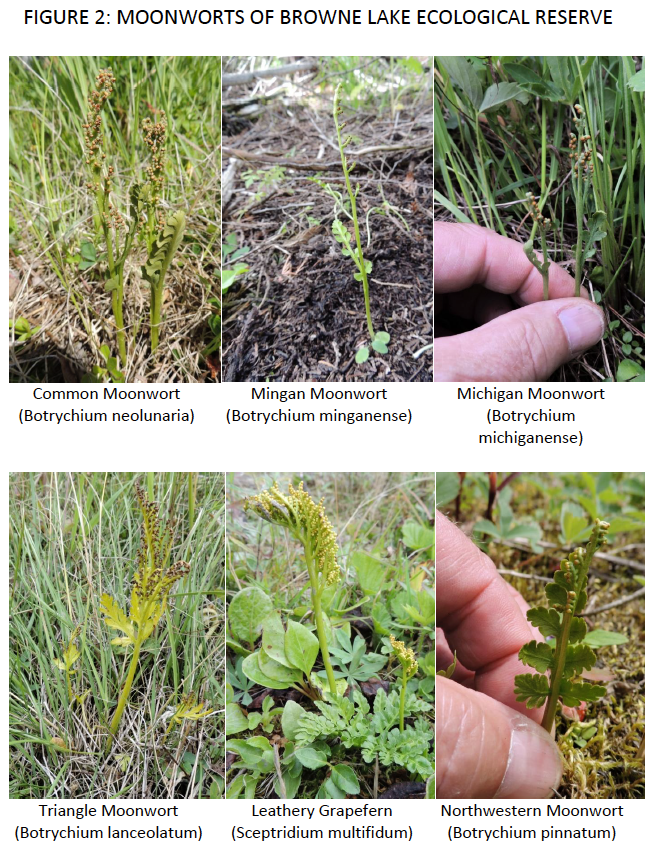 Competition with grasses may be a limiting factor for moonworts. Ahlenslager and Potash (2007) note meadow populations of moonworts in Washington and Oregon are maintained by cattle grazing. They suggested that removal of grazing may be detrimental especially if succession to woody vegetation occurs. Cattle and hay making occurred in the reserve before it was established in 1973. Therefore, the BLER has been recovering now for at least 47 years. Encroachment of Pinus contorta, and to a lesser extent Picea engelmannii into the Northwest area and Pseudotsuga menziesii into the Southwest and East areas, may eventually give rise to forest and the disappearance of the moonworts. Botrychium minganense is shade tolerant and a forest dweller and while it has been found in the meadow, it has not yet been found in the adjacent forest.

We have found that doing surveys too early or too late produces inaccurate results and that 2 or 3 counts spread throughout the growing season produce the best results. Early blooming/early senescing individuals may not show up on late surveys, and late blooming individuals may not show up on early surveys. Early counts underestimated peak numbers in the East area and along the meadow’s edge, where growth was slowed due to shading effects. When there is significant herbivory, multiple counts can provide perspective on low numbers. In 2019 and 2020 there was little visible evidence of significant herbivory (i.e. partially chewed plants, missing plant parts) or missing plants when areas were recounted. We saw no evidence of rodents, a common predator of moonworts (Ahlenslager, K. and L. Potash. 2007). Few insects were observed except for ants, which were abundant in many of the moonwort areas. Their relationship to the moonworts is unknown.

Spore casting represents the seasonal end of a moonwort’s development, after which it senesces and withers away. At BLER, we saw Botrychium lanceolatum and Botrychium michiganense cast relatively early and Sceptridium multifidum late, and the rest were in thmiddle. Sceptridium multifidum and Botrychium lanceolatum cast spores later in shaded areas than in fully exposed areas. Moonwort surveys at BLER continue to be done in conjunction with moonwort surveys at several other locations in the Kelowna area. 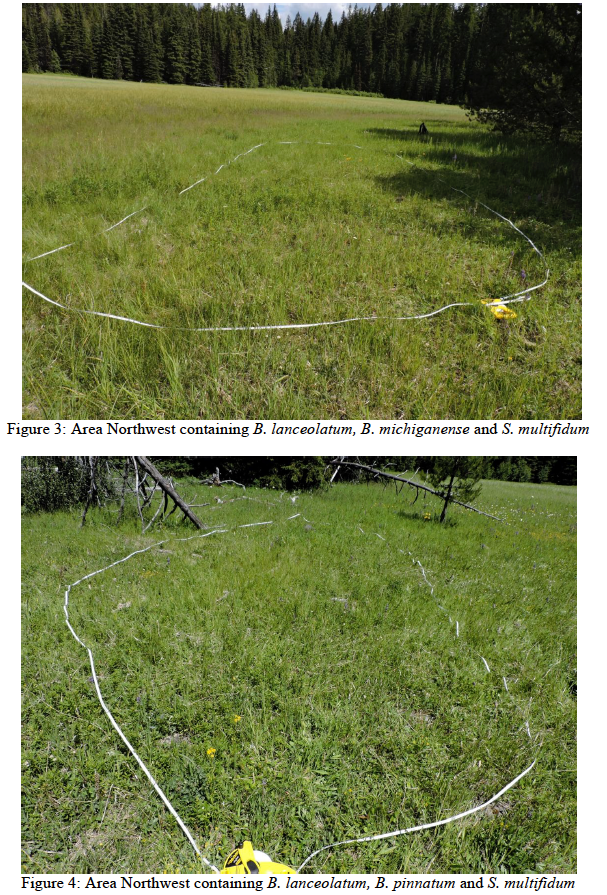 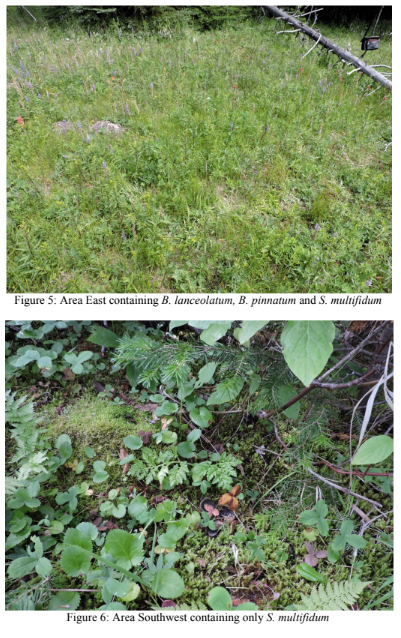 Here is the pdf of this report: Browne Lake Report 2020 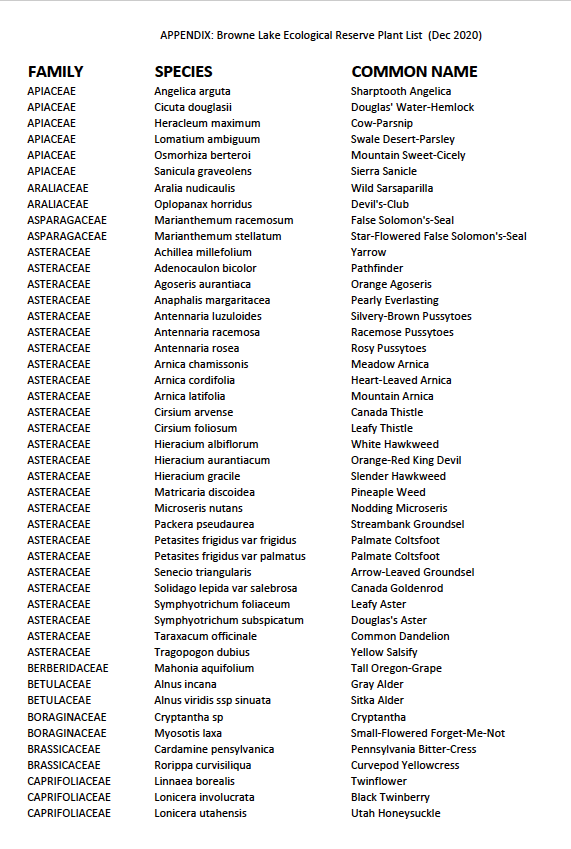 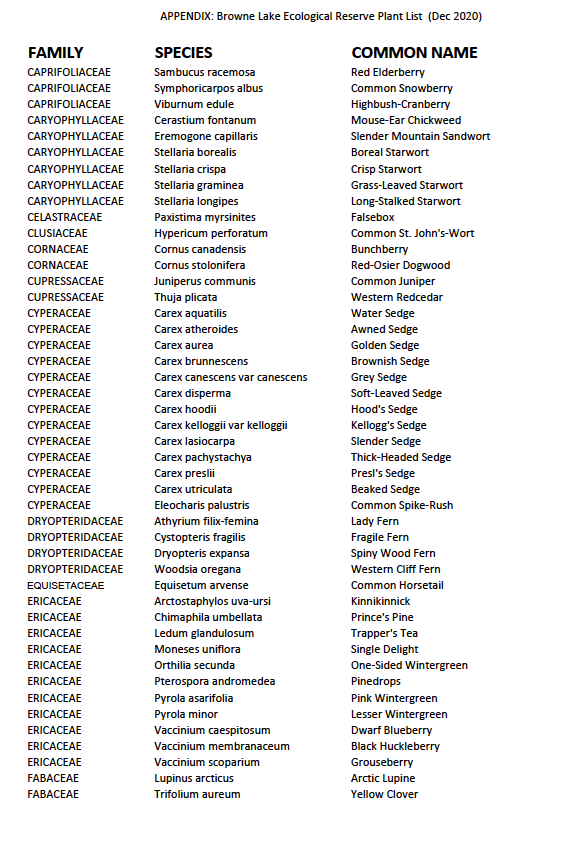 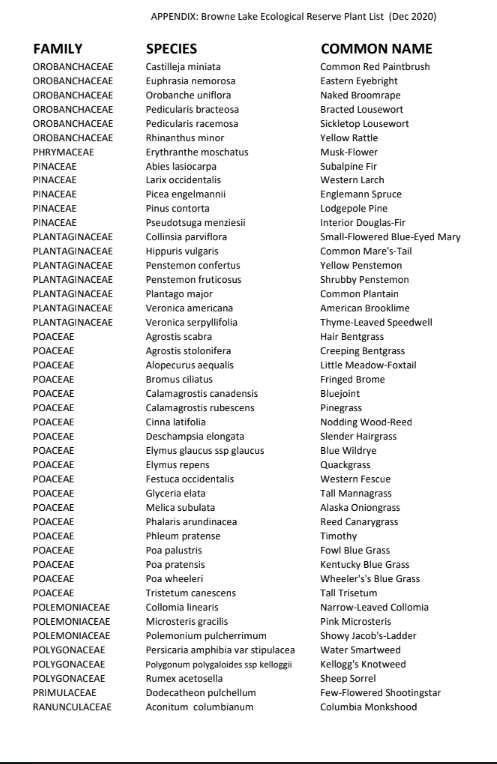 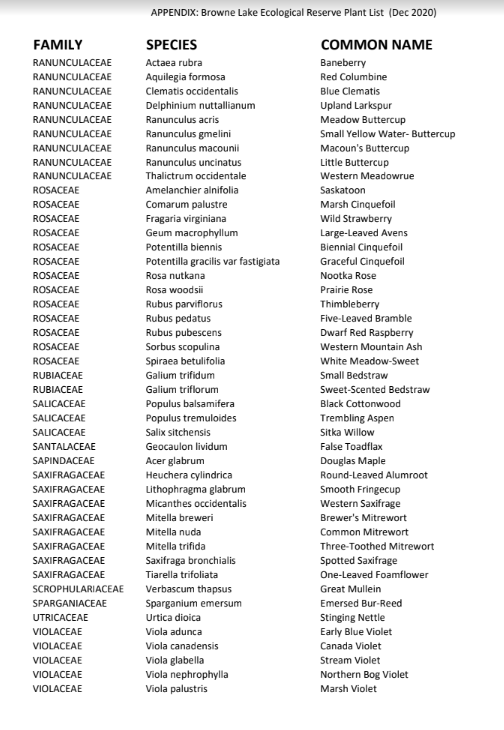