See the complete PDF in its original form here:

Šumava, the last day of February 1948. Snowy mountain forest. He doesn’t know much about the Šumava forests, but how much have he experienced such, even riskier, moments? To illegally travel west, you need to know not only where, but also how.
In Klatovy he met a man who helped him to the border. Like a less conspicuous skier, he descends from
Špičák from Šumava to the German Bayerisch Eisenstein in the American occupation zone. Americans like him
VIPs are escorted very quickly to Frankfurt, where the top Czech emigrants are concentrated. Forty-three-year-old
Vladimír Josef Krajina begins a new stage in his life.
Home stage

We find the origin of interest for nature
in Krajina’s childhood. My father was the head teacher
in Slavice near Třebíč. He showed the children
what grows in the forest, talked about game, taught to graft trees. Vladimir had an example in his father
Czech patriot and strong moral man
character. At the age of fourteen
decided to be a botanist scientist and already in
At the age of 29, he became an associate professor at Charles University.
Its a fast growing scientific
his career was interrupted by World War II
war. He was forced to leave the botanical profession
and joined the anti-fascist resistance.
He was in charge of intelligence activities, at
which provided communication with the Western
foreign resistance, led by Dr. Edward
Beneš. His daughter remembers this time
Milena: “Dad sometimes, actually quite often,
he was sitting at a table with a plaid in front of him
paper and put different words on the dice
and then he somehow portrayed it all and it seemed
I think it’s such a kind of game… as he did
actually ciphers. 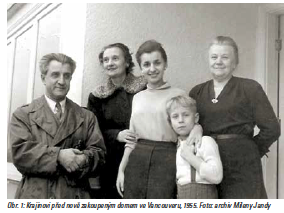 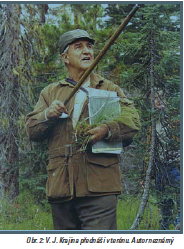 He participated here to establish a network of protected ecological reservations. He advocated a drastic reduction even several hundred-hectare bare mowings, so normal in forest management in the province (Jeník 1992, 2002; Korelus 2014). It was founded in 1973 on the Haida archipelago Gwaii (Queen Charlotte Islands) reservations, which bears his name – Vladimír J. Krajina Port Chanal Ecological Reserve. Respect and admiration for Krajin’s work is expressed in memory Professor Hamish Kimmins at Krajin’s often repeated appeal to the forestry to British Columbia: “If you did they did in Europe what you do here, they were you would have been in prison long ago ”(Fig. 2). At Krajiny at home, everything went according to the Czechs customs and their house was also opened for Czech students. Its the last, albeit unofficial (already accepted for Krajin’s pension), was Karel Klinka, a former typologist at Lesprojekt, Karlovy Vary branch, which to He emigrated to Canada in 1969. He accepted him probably also because he wanted someone to continue in his work. Such a person into that times, alas, the landscape did not have. Klinka remembers that Krajina has always taught him what this is, where it is and why it is. Giant. 2: V. J. Krajina lectures in the field. Author unknown “It was overwhelming
and a respectable influx of information. What a joy
It was with him to stay in the woods and learn
how to read in nature like in an open book…
He was tireless… even after he was
retired, he could not sit at home. Always
came by car to our cottage at the university,
in which he had his office, and his
Marie’s wife had to call him
at least three times before deciding to return
home for lunch. ”(Drábek 2016, p. 178).
(Note: More about Karel Klink in the next
number Forestry work).
Prof. Krajina has already published its work
in the mid-1960s when he was building
at work of many of his Ph.D. students.
It was a time of active environmentalism,
Krajan’s students were successful, they won
good state job or position at the so-called
ELUC (Environmental Land Use Committee,
Land Use Committee, predecessor
Ministry of Environment). Many have established themselves
own consulting firm. 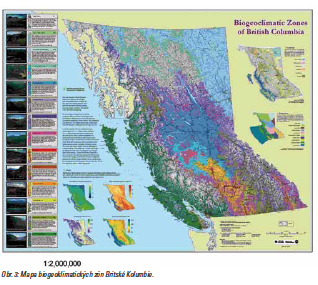 Krajina
became the theoretical founder of the classification
forests of British Columbia, which later
became, with the great contribution of K. Klinka, the basis
biogeoclimatic ecosystems
classification https://www.for.gov.bc.ca/hre/
becweb (Fig. 3). This classification system
is used in forestry practice
and nature conservation of the province to this day and has become with an example for other classifications in the world.
(Kusbach 2010). Your work paradigm
on the classification, Krajina expressed it as follows: “Without
classification, there can be no ecosystem
science and ecology. And by itself,
no science. ”(Krajina 1960; Drábek 2016,
p. 142). 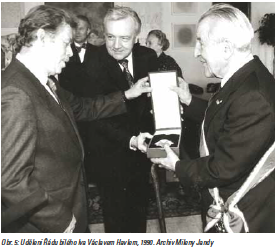 Scientist and politician awards
Landscape’s uniqueness as a scientist
and they also prove a publicly active person
meetings with world personalities and honors,
which he was awarded. Already like
to the young student Krajina in person
congratulated on obtaining a doctorate in Charles
President Masaryk and dedicated to him
gold watch with engraved congratulations. To Masaryk’s
an ethical legacy recalls one
of his Czech collaborators Vladimír
Korelus during his visit to Krajin’s office
in 1971: “He was sitting in a white coat behind
desk all covered with papers,
books and magazines (Fig. 4). 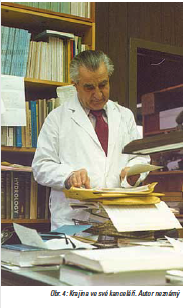 The books were
everywhere and on earth. Behind him on the wall
hung a portrait of the first president of Czechoslovakia
of the Republic of Tomas Garrigue
Masaryk. ”After the war, he was president of the Economy awarded by the Czechoslovak War
cross. During a stay in the UK
was invited by W. Churchill to
family seat Checkers. Churchill knew
The country has been around since the war. Krajin’s daughter
Milena remembers that after returning from a visit
he amusedly told them that Churchill had
in fact, the greatest interest in showing him his paintings,
because he painted, and his mistress him again
she pulled into the grove because she wanted him to identify her all the ferns she had there. So there was not much talk about politics.
He was awarded in Canada in 1981 Order of Canada. Among other awards in the province British Columbia has been Krajina  for life
appointed an honorary member of the Association
of Professional Foresters, now called
Association of BC Forestry Professionals.
President Havel granted it in 1990
the highest civilian award for foreigners
Order of the White Lion of the 1st degree (Fig. 5). At the meeting According to Milena’s daughter, Havel remembered
that her mother and Havel’s mother resided
as a young man in the same pension in Brno.
It was interesting that Havel knew about it.
Management
in the forests of British Columbia is
invaluable. Landscape was not just a scientist
and politician, but in a way also an adventurer.
Bravery, decency, moral strength, diligence
and um were the qualities that made him
one of the largest Czechs of the 20th century.
Right now, when these seem to be
qualities fit somewhere, you need a personality,
as was the Landscape, remember. Towards
his words still apply to foresters
he wrote in a report for a forestry company
Weyerhaeuser as early as 1954: “Our forest
resources must not be used like those in mining,
which can never be again used. Forest resources should be maintained so as to represent a permanent return
also for future generations. “