Submitted by Bill and Bev Ramey, May 2020

ER #76 was established “for the conservation of the only remaining unaltered and uncommitted lower Fraser River floodplain islands” (from BC Parks website), and further to preserve “an unaltered cluster of mid river islands in the Fraser River Lowlands as an example of the accretion and erosion processes in this gravel reach of the Fraser and as an example of the stages of succession from pioneer colonizers through to mature deciduous floodplain forest and the wildlife these habitats support”.

It is the erosion and accretion processes themselves that have caused the issue. The reserve was established with a fixed boundary and so cannot accommodate this group of undyked islands that accrete in some areas while eroding in other areas, so their shape shifts year to year.

Geomorphologist Dr Michael Church, UBC emeritus Geography, has studied this stretch of the Fraser River in detail. He suggests that the best workable solution is to redraw the ER boundary out in the centre of the deep flowing channels that border the islands. He did suggest the ideal solution would be to establish a boundary from mainland shoreline to mainland shoreline across the Fraser. However, realizing this would be a likely impossible task due to the several private property owners on those mainland shorelines, he recommends the boundary be relocated to the deep water channels that surround these shape shifting islands.

Another possibility that we wardens have recently suggested, but only if it is easier to achieve, would be to surround this ER #76 with a Wildlife Management Area designation, that would give the Ministry first say based on a conservation perspective. For this reach of the Fraser River, a WMA designation surrounding the ER would complement nearby neighbouring WMA designations — just downriver is the Bert Brink WMA and upriver on the Harrison near its confluence with the Fraser is the Lhá:lt/Harrison-Chehalis WMA.

We have been in communication with BC Parks staff over a few years to plan for this boundary adjustment, but given their existing heavy workload demands, this is not near the top of their focus list.

Compare the configuration of the islands in the aerial photo above (2011) with a more recent aerial photo (June 2019), on the next page. Note however that the 2019 June photo is during the high water of the Fraser River freshet, so most of the gravel accreting shoreline and inner swales are cover by the river water. The 2019 photo does however show that the south facing, most downriver island, has now breeched due to the river erosion, while the upriver islands are continuing to expand to the north and west, shown by the large gravel accretion areas. These new gravel islands, with ongoing accretion have been raised to a fairly high elevation as they are still visible above the level of the Fraser River during its June freshet and are increasing supporting early successional vegetation. 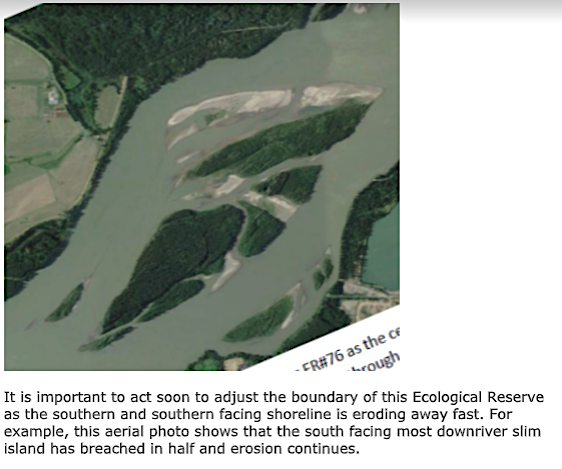 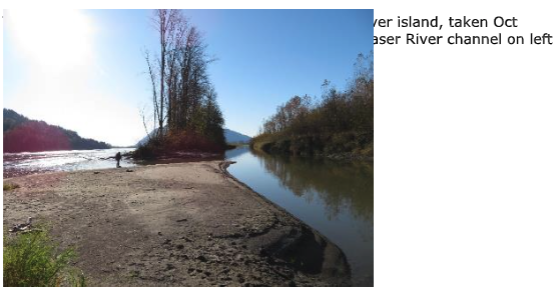