Ecological Reserve Wardens Bev and Bill Ramey submitted this report on a visit to the Ecological reserve on October 29, 2019

November 2019 saw a fresh water mussel shell, in similar location to shells found Dec 2014, and in a couple of other subsequent years. Here’s report from 2014:

We found a fresh water mussel shell.  It was identified by staff at Ministry of Environment as the endangered Western River Pearl Mussel.  We will look more carefully for shells in future trips.

Under species list, we’ve created a hotspot on eBird, which is publicly viewable, at this link:

That eBird website is where the more recent bird lists are posted, with species and numbers.

A nice set of photos accompanies this report

Walking and paddling distance about 16 km 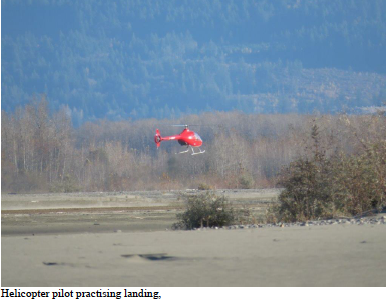 When launching our kayaks and paddling across to the islands, we saw and heard two helicopters that were practicing landing on the northern accreting area of the Ecological Reserve. We thought it was practice as the landings were followed by take-offs soon afterwards. The smaller helicopter landed three times.

Tracks from previous helicopter landings (two parallel lines, about 1.5 metres in length) were observed in about eight locations on the accreting island on the north side of the ER. This is the area we named the Burrowing Owl Sand Dune, from BUOW seen there a few years ago. This accreting area is outside the ER boundary. There were also tracks from fixed winged aircraft landing in this area.

There was less human garbage along the shorelines of the ER than usually seen during a fall visit. There were only about five fire pit remains from the summer fishing season. It is unclear if this was due to improved behaviour by people, the mid to late August salmon fishing closures or other reasons. Colonizing vegetation such as the willows and herbaceous plants looked very green and with some new growth, likely due to the wet fall. 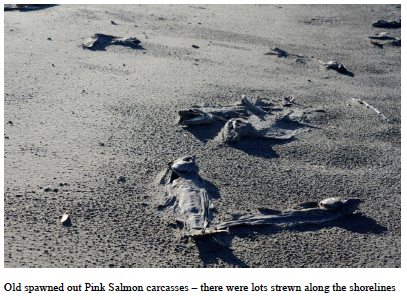 There were many decaying pink salmon along the shorelines from their late summer spawning. The carcasses were very much decomposed, so the eagles and other scavengers were no longer present in large numbers.

After landing, we walked to the upriver tip and then downriver along the southeast facing bank. That bank continues to erode, washing into the main channel of the Fraser. The inner swale which had previously been accessible for walking has now become flowing deeper water. Bushwhacking was necessary to continue downriver, but the extensive Himalayan blackberry made this difficult. Further along its length, this inner flowing channel has cut through the bank of the once wide cross channel. That cross channel had been a feature of the islands since we became wardens seventeen years ago. At this water level that cross channel had typically had quiet, gently flowing water, but now it has filled in with fine sediments and is dry. The new flowing channel cut through its bank and flows past the eagle nest group of largest cottonwoods. The 2019 spring/summer freshet has certainly eroded a lot of sediments from banks and deposited sediments in new accreting areas.

The other cross channel (to the main flow of the Fraser) that typically did not have standing water, has had even more sediments deposited and it is quickly being vegetated with colonizing vegetation–lots of white sweet-clover, other herbaceous plants like dandelion and great mullein, as well as willow and some cottonwoods young seedlings. We removed what looked like one

common hounds-tongue plant. The challenge with these islands is the constantly renewing seed source that floats down from the Fraser River watershed and is deposited as the freshet recedes.

The lower island facing south and southeast towards the main channel of the Fraser also continues to erode. The open breach across that island from the 2018 freshet has not expanded much. It now has a large pond in its lower half, with water flowing in from the main river channel through the eroded breach through this island.

Generally, the islands are eroding on their south and southeast facing side and accreting on their north and northwest side, and downstream at the lower tip of the islands.

It may be time to rewrite some of the description of the Ecological Reserve posted on the BC Parks website which presently states:

The reserve consists of: an older stage vegetated island with mature cottonwoods, several younger seral stage islands, eroding shorelines facing south and southeasterly towards the main channel of the Fraser River, and with accreting shorelines on its north and northwestern facing shorelines plus on the downstream tip of the islands. There are several gravel swales cutting through the islands, with gravel/sand/silt exposed at lower water; and at lower water levels hold quiet water ponds.

We saw a fresh water mussel shell, in similar location to shells found Dec 2014, and in a couple of other subsequent years. Here’s report from 2014:

We found a fresh water mussel shell. It was identified by staff at Ministry of Environment as the endangered Western River Pearl Mussel. We will look more carefully for shells in future trips.

Deer – extensive tracks, plus one doe with two young seen

Records entered on eBird at hotspot:

Mallard 140, most of these were loafing in quiet water and shoreline of downstream tip of main island

Common Merganser 11, most were male

Bald Eagle 8 adults, 4 immatures. Two of the adults were perched together on snag in river near

the nest tree; these two seemed to follow us around the islands and would perch in a tree nearby keeping watch. Four adults observed soaring high above Chilliwack Mtn.

Glaucous-winged Gull 120. Of these, about 100, were loafing on upstream tip of islands and

including about 20 that were immatures; other observed flying over and singly. There may have been small numbers of other gull species such as Ring-billed mixed in with this large flock

it was feeding and when accipiter flew over it froze; then continued feeding despite our presence wading that creek

Insects (both identified through Royal BC Museum staff) 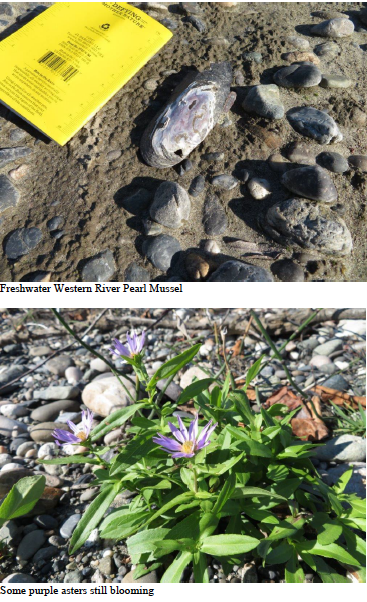 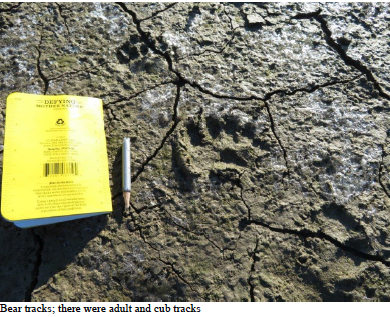 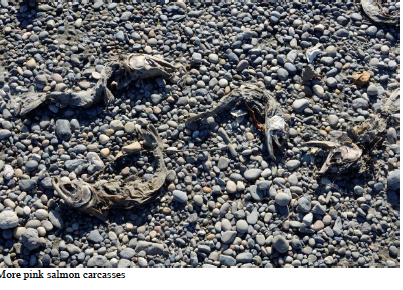 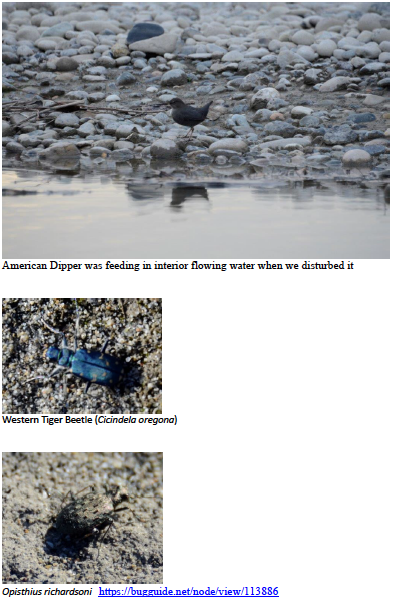 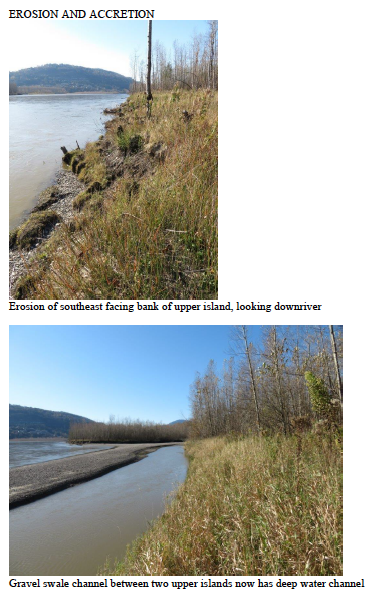 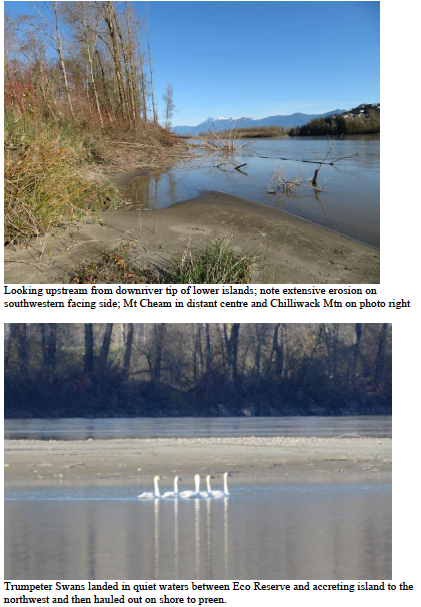 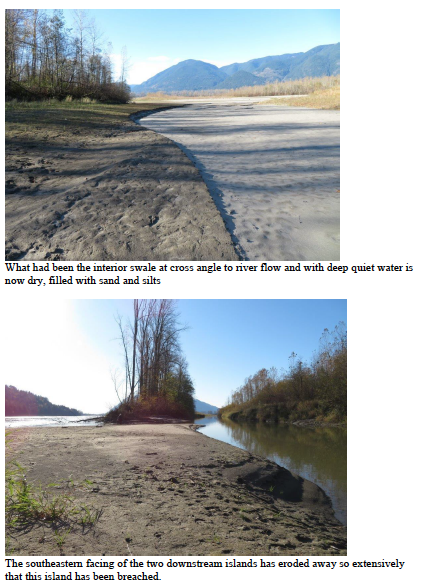 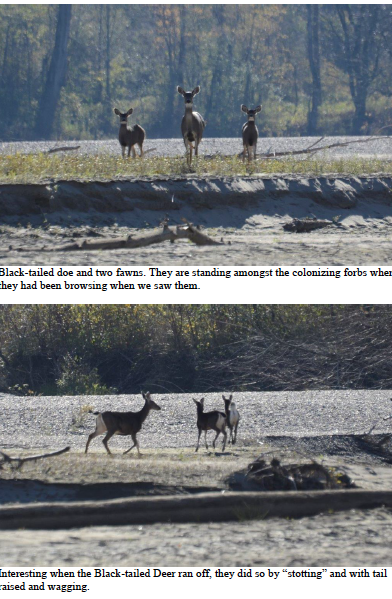