The water level was even lower than last March – perhaps the lowest level we’ve yet seen during visits to the island. We landed on the upper gravel bar, as close to the ‘Burrowing Owl Sand Dune’ as the lower water level allowed. Along the shorelines of all the islands where water was quieter, were many spawned out Pink Salmon. Most had their eyes eaten. Many carcasses were higher on shore, as water level had been higher in previous few weeks.

Around the vegetation growing on the sand dune, we saw 3 Western Toads (one small and two mid-sized). We later head a Pacific Chorus frog croaking.

We walked first to the lower islands. With the water level very low, we were able to walk all the way to the newly accreting island (just outside the reserve boundary). Then back upriver a short distance, where we were able to wade across the quiet water channel in between. This channel was closed at the upper end, so formed a large, quiet pond. The downstream tip had a few Glaucous-winged Gulls and on the gravel bars immediately across from the main strong flowing channel, hundreds more. The southwestern shore of the lower island shows extensive erosion of its steep bank that fronts the main river channel. This eroding shoreline (bank) is at this GPS (Nad 83) 10U 0570840 5446508 (+ 7 metres) The southern lower island has now only about 10 metres of treed land remaining between its eroding bank and the inner swale.

We continued walking back upriver along the inner swale, between the two large lower islands. There were several purple asters blooming and a few Brown-eyed Susan. Some of the small pools had several schools of fish, trapped by the lower water level, and with several heron footprints surrounding. One fish was dead and photo has been identified as a Northern Pikeminnow (Ptychocheilus oregonensis).

At the top end of the long inner swale, we headed northwards alongside the cross channel. Although now without an inflow, its interior pools were still deep. However there was one small (about a half metre long) drying out pool with hundreds of small fish (3 – 4 cm in length) so we used our plastic lunch containers to transport a few hundred to the large pond. Majority were identified by the photos as juvenile suckers, plus a few sculpin and a few small larval lampreys which were about10 cm long. See photos.

Heading upriver along the large interior dry gravel swales, we noticed no sign of campfires, trail bike tracks, and no fixed wing airplane tracks. The gravel bar looked to be in good shape for a plane landing, as fairly smooth, so it was nice to find no tracks.

Heading upriver on the southern side of the upper islands, the outer side, closest to the main river channel continues to erode away.

Rounding the tip, we observed hundreds of Glaucous-winged Gulls on the upstream tip and the gravel bars across to the northeast. Walking towards the Sand Dune, we noted much accretion vegetation sprouting up. We found two shells of freshwater mussels (Western River Pearl Mussel). Then unfortunately we saw tracks of one plane that had landed, looped and taken off, just southwest from the Sand Dune. As we were paddling back, a flock of ducks (Mallard) flew overhead to a landing in the quiet water near the downstream tip.

Mallard 15 (flock flying over seen near our take-out, towards quiet water near downstream tip)

Beaver – active in many areas; one hauled itself out on a log to sun and scratch for awhile

Deer – tracks from several deer; at least one young

Carcasses of Pink Salmon along shoreline….maybe 200

Larval Lamprey (about 10 cm in length) 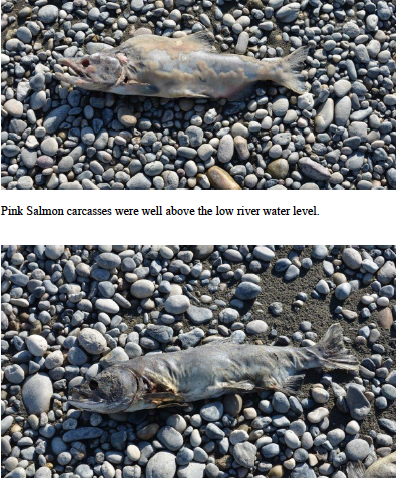 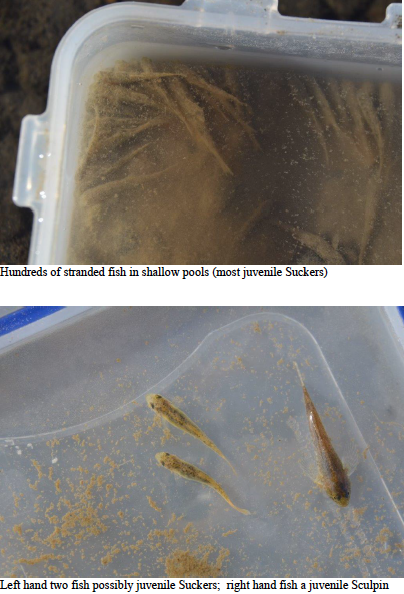 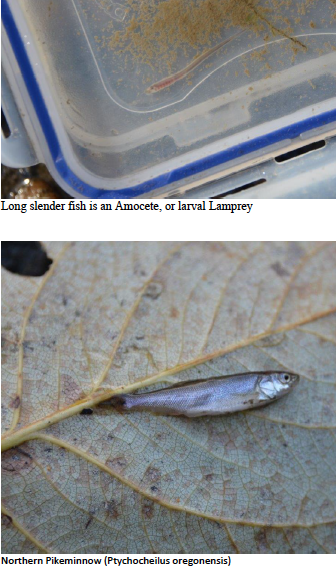 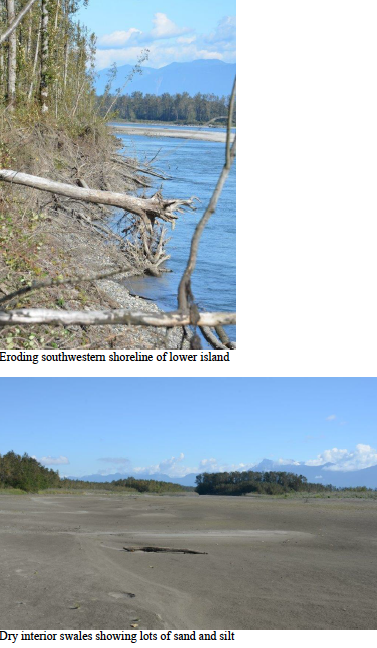