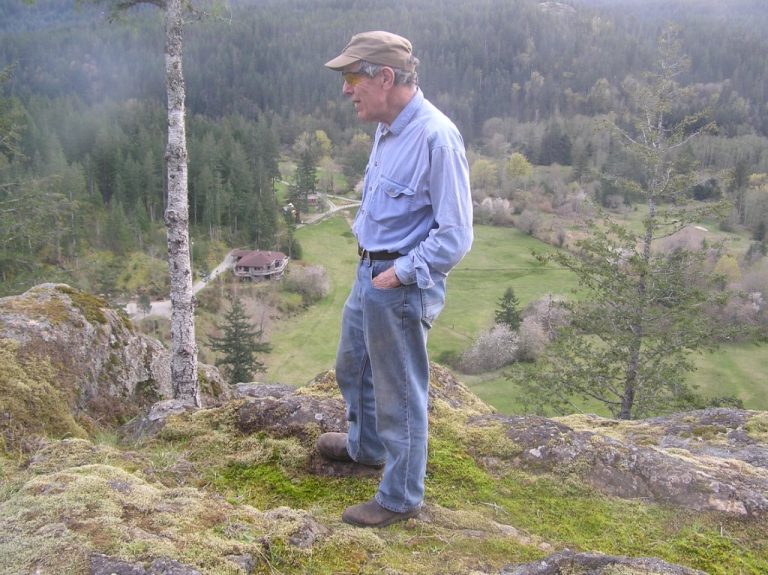 Not long after he was born in Switzerland Rolf’s parents took him into the mountains. And so began his lifelong passion for the hills. Teenage rock climbing forays followed and then membership in the university alpine club – the Akademischer Alpenclub Bern. That same group organized an expedition to a unvisited area of Spitzbergen and Rolf was lucky enough to take part. Shortly thereafter, during the International Geophysical Year, Rolf was invited to join a group of scientists working on the Salmon Glacier near Stewart, BC. As he often said with a laugh, “my job was mainly to prevent people and machines from falling into crevasses”. The following winter was spent in Toronto where he worked in the university geophysical department under J. Tuzo Wilson, one of the originators of the plate tectonics theory. Sadly, no mountains in the vicinity, but while there he helped found the University of Toronto Outing Club and joined the Toronto Section of the ACC, which at the time had so few members that they were meeting in private homes.

Eventually BC called out loud and clear to him, and with Heather, whom he had met while rock climbing near Toronto, already in Vancouver, he soon immigrated to Canada. The economy was in poor shape and jobs were scarce at that time. Heather had to promise that she would support the prospective immigrant before he was allowed to come! However, within a week of arriving he had a job as a civil engineer with what is now BC Hydro.

No time was wasted on the mountaineering front – he joined the Vancouver Section of the ACC and was for many years the climbing chair and organized the first section climbing camp. That first camp was held at Chilko Lake, where club members made several first ascents and also experienced some epic bushwhacks. Climbing wasn’t the only activity at this camp, there is a great photo of Mike Hubbard and Rolf proudly holding up the two fish they had finally managed to snag. Another highlight during Rolf’s time as chair, was persuading author and explorer Raymond Patterson who was living in Victoria then, to give a talk about his book, “The Dangerous River,” and his adventures on the Nahanni River.

After several moves between Vancouver and Edmonton Rolf finally finished his PhD in Civil Engineering. After a short stint as a professor, Rolf started his own engineering firm. Then, bitten by the fanciful back to the land bug, the family now with two children, Erika and Markus, moved in 1977 to Quadra Island. Their new home, one of the original and much neglected, old homesteads was more work than fancy. Consequently, not quite so much time for climbing, especially when the Highland cattle were running amok. As if this wasn’t work enough Rolf and his friend Grant Hayden acquired a provincial woodlot on Quadra Island. But Rolf and family, often accompanied by ACC friends, notably the ever-enthusiastic Norm Purssell, continued to make more ascents in the Chilko Lake area. Erika and Markus built a small log cabin there that became the focus of many wonderful trips. During this time Rolf found time for climbing some out of the way peaks on Northern Vancouver Island and on the mainland near Toba and Bute Inlets. And there always seemed time for Rolf’s passion/obsession for trail building and for organizing trips for the local naturalist group – the Mitlenatch Field Naturalists. As its chair for many years Rolf also became the group’s delegate to the Campbell River Environmental Council.

Rolf had a long career as a civil engineer specializing in rivers, bridges and dams and protection from natural hazards such as flooding and mudslides. As time went on his river engineering work became more oriented towards environmental concerns. His research uncovered impacts to the Peace-Athabasca Delta caused by the damming of the Peace River, an area important to First Nations People living nearby. He also took part in several Federal Environmental Review Panels.

There were two special places on Vancouver Island that captured Rolf’s heart. One was the Nimpkish River area on Northern Vancouver Island. Through his involvement with the Mitlenatch Field Naturalists, an affiliate with what is now BC Nature, he became a volunteer warden for the Nimpkish Island Ecological Reserve which contained one of the last and best examples of lowland, old growth forest in that valley. Many trips were made to the area, including one in dicey winter conditions that left some ever vigilante park bureaucrats wagging their collective fingers. Poor logging practices threatened Nimpkish Island with erosion, but Rolf used his professional knowledge to suggest low impact protective measures, basically taking advantage of some of the massive fallen trees to protect the banks of the island.

The other special area for Rolf was the west coast of Nootka Island which saw few visitors after the old trapper’s trail fell into disuse. However, logging was creeping ever closer to the coast. So again with Norm Purssell and Heather as companions he planned a trip there, not really knowing if it would be possible to make it around to the finish at Friendly Cove. There were a few old blazes and remnants of a trail where the route left the beach. Some years later after more hikes and more trail clearing by Rolf and others, family and friends helped publish a pamphlet describing the route of what is now called the “Nootka Trail”.

Though Rolf was not very active with the Vancouver Island ACC, he did get to meet and climb with some of the members – amazing people like Gerta Smythe, Syd Watts and Rick Eppler. He would have loved to climb up to the new cabin being built by members. Rolf’s last major trip into mountain country was with BC Nature in September 2015 to Tatlayoko Lake where he climbed to the plateau overlooking Chilko Lake and the small log cabin where he and the family had spent so many fun days.