We met Charlie Ramey at the parking area near the Deroche Bridge. Driving to the launch, we saw at least 10 Meadow Larks feeding in the farm fields, perching and singing on the hydro wires. We carried our boats to the launch. Current was fast right at the launch, but with the low water level we were able to paddle up river a considerable distance, using the eddies along the shore. We then paddle directly across to ER and landed near the sand dune (accreted area). An American Kestrel was perched on a beached log on shore. The extensive gravel shoreline along this accreted gravel bar had many salmon redds, visible just below the river water level. Likely these were from the Pink Salmon (main stem of the Fraser River spawners in even numbered years, late August through September). There were many visible salmon carcasses along the shoreline (the slow moving water shorelines, not the eroding shorelines), but these carcasses had all been cleaned of meat with only the bones remaining and for some, the hardened skin. We saw only one large salmon carcass with meat, where three or more Bald eagles were feeding and perched. Throughout the day we saw several large salmon jumping in the river. These were possibly the start of the Coho, Chum and Chinook runs which increase through November.

The vegetation on the sand dune itself is thickening and growing taller (willow, cottonwood, and horsetail). The water channel that used to flow below the steep side of the dune was dry. We searched the water ponds landlocked in this area, looking for mussel shells, but found none. We walked downriver to the channel that intersects the islands. At this lower water level we were able to wade across (water knee height) and continued walking downriver along the lower island’s north facing shoreline. This area had the most Bald eagles, most perched in trees and some near that one salmon carcass. We observed at least ten eagles in this area, half immatures.

Next we walked up the central swale. The low water made it fairly easy to scramble around the few interior pools. Several had small fingerlings visible. We neither saw nor heard bull frogs.

Arriving at the central area between the upper and lower islands, we could observe extensive First Nation fishing activities on the Chilliwack mainland. Operations have expanded with several boats setting nets and visible on many of the gravel bars were large plastic storage containers for fish (size around 6’x5’).

Surprisingly we observed a beaver swimming out a small water channel into the main river. Although we have seen extensive sign of beaver activity in our visits over thirteen years, this is the first beaver seen. We lost sight of it in the main channel where it submerged.

After noting a few mallards in the interior cross channel, we bush wacked across the lower island, following old swales now rapidly revegetating, including some blackberry, and reached the shoreline where we had waded across. Throughout all the islands we noted rapid growth of reed canary grass. It is even growing amidst the early successional horsetail.

Next we made our way upriver on the large gravel/sand swale of the upper islands. We observed twelve Killdeer in this area. Near the Killdeer sightings were tracks from fixed winged aircraft landing and taking off. It looked like at least two landings had recently been made.

Near the upper tip of the islands, along the eroding shoreline, there was extensive growth of White Sweet Clover, many in flower. Throughout the island gravel and sand areas there were also several Purple Asters in flower, a Common Mullein and Brown Eyed Susan.

The upper tip of the islands appears to be shrinking with erosion. We walked back downriver along the north side of the upper islands to the sand dune, where this area of accretion appears to be increasing in size.

Looking north to the gravel bars bordering the shore of Nicomen Island, we observed another 28 eagles, some loafing on a beached log and most perched in the large trees. These eagles were approximately half adults and half immatures.

Throughout the day we observed many large skeins of Canada Geese flying overhead, always flying upriver. We would hear their approach from the direction of Sumas Mountain, and see them flying overhead, heading upriver. We never observed any heading back downriver or circling. However, late in the day three flocks (total of about 420 birds) flew upriver and then circled southwards towards Sumas Prairie area, where they appeared to circle down to land. Earlier in the day we could not see this direction (view blocked by Chilliwack Mountain) so we do not know whether all the geese headed this way, or even were making a very large circle thereby passing overhead more than once. In total we observed 2200 Canada Geese, in about 20 flocks, with some skeins up to 200 birds.

By now it was late afternoon, and we observed increasing numbers of crows, massing and flying above us to land on gravel bars along the Nicomen Island shore and on the Reserve near the sand dune. They were mostly coming from the Chilliwack area, flying over us towards Nicomen Island. We observed a coyote that was stalking the crows on shore together with some Glaucous-winged Gulls. When the coyote saw us, it headed quickly back across the gravel accretion area and into the trees of the larger island. It was very light coloured, mottled with darker spots and a very light chest. The crows continued on their route to roost for the night by flying up to the large trees bordering the shoreline of Nicomen Island.

Near the sand dune, we saw a single invasive Hounds Tongue, loaded with seed heads. This is the first we’ve seen on the islands. We removed all the seeds (taking home to garbage) and

pulled up the plant to hang up in a tree. Since this plant is biennial, removing the seeds was likely sufficient to prevent it’s further spread.

(average flock size 110, although several were up to 200; may be an overcount as possibly flocks were circling around behind Chilliwack Mtn to then later reappear flying upriver)

Double-crested Cormorant 4 (all fly over)

southward; this flock may have been loafing on the islands, and later returned, resulting in double counting; however at least 100 observed at one time on Reserve shoreline)

Northwestern Crow 715 (includes the 700 seen in late afternoon, amassing for night; these were

mostly flying from the Chilliwack area, heading towards Nicomen Island) 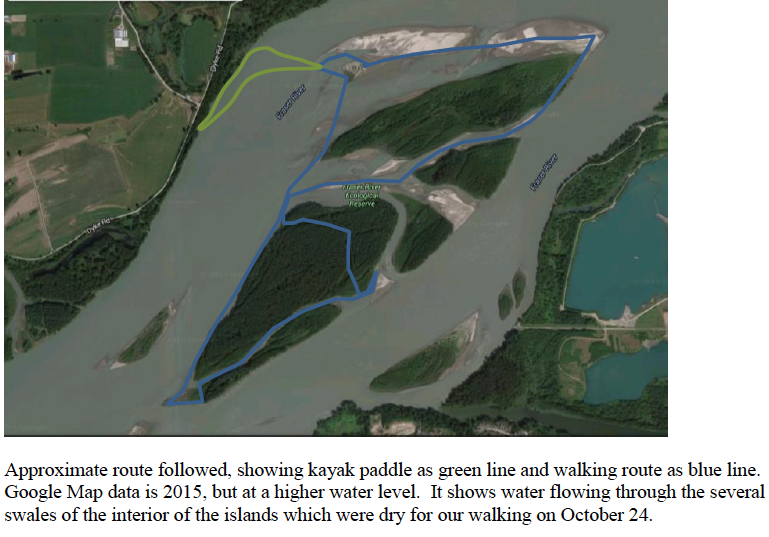 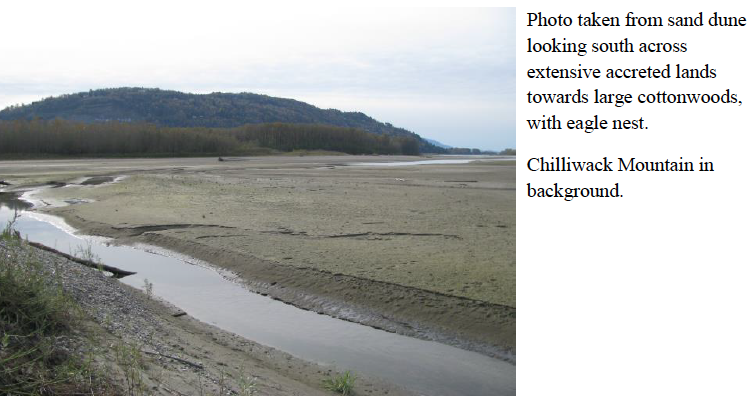 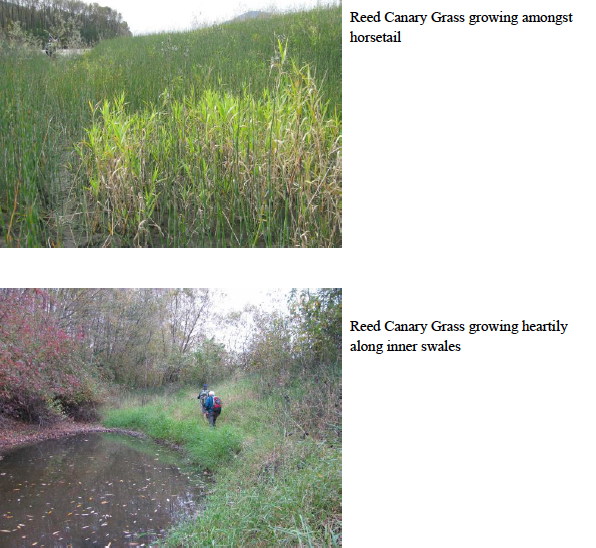 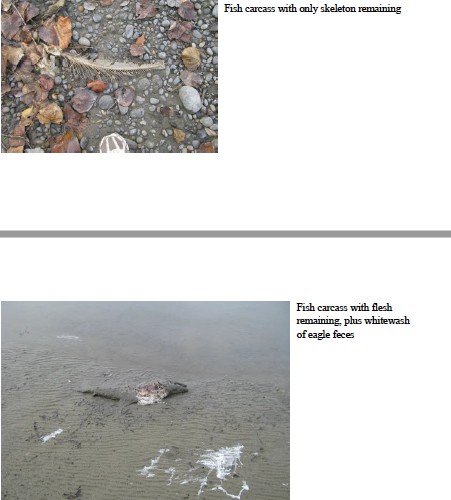 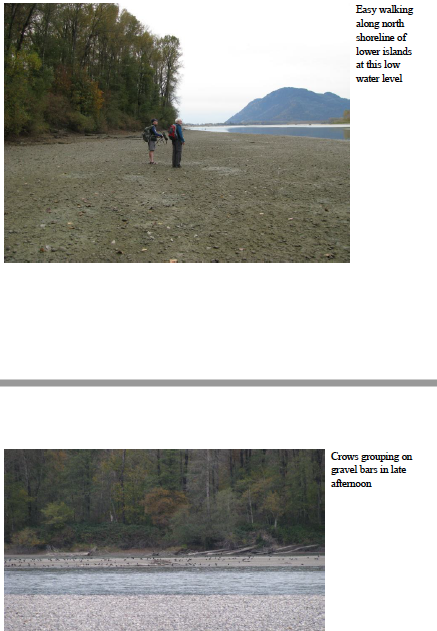