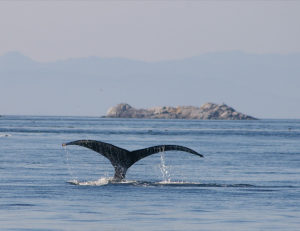 Lester Pearson College has employed the Ecoguardians at Race Rocks Ecological Reserve since 1997. One of the benefits of this is in having observers on site 24 hours on this archipelago in the Strait of Juan de Fuca.

A great amount of citizen science is achieved as the Ecoguardians  record in their logs the events such as whale sightings of the area.

In the past year we have been working as intervenors for the Board of Friends of Ecological Reserves to try to question and advise  the National Energy Board and the Kinder Morgan Corporation on the problems of increasing the traffic of oil tankers from the Westridge terminal through the Strait of Juan de Fuca. The area of potential impact from chronic and catastrophic oil spills puts at risk the ecological integrity of  up to 17 of our Marine Ecological Reserves around southern Vancouver Island. In our submission we are able to draw upon the records from the Race Rocks Ecoguardian’s logs to demonstrate the increase in the incidence of whales in this area. A recent report of the Department of Fisheries has criticized the Environmental assessment done by Trans mountain as being ineffective to take account of the increasing potential of Impact on the large whales such as humpbacks and the underwater noise which will mask the ability of whales to communicate and get food.

The following graphs  show the increase in the number of days per month that whales were observed from Race Rocks: Thanks to Ecoguardians Ryan, Raisa, Adam, Alex, Virginie, Julie, Courtney, Nick, and Anne for contributing to this database. 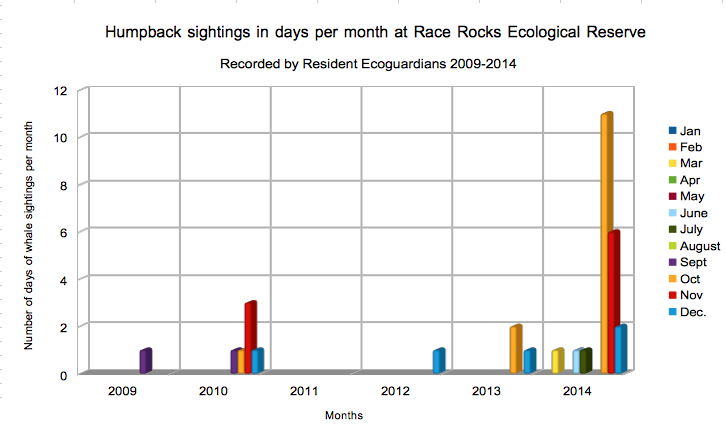 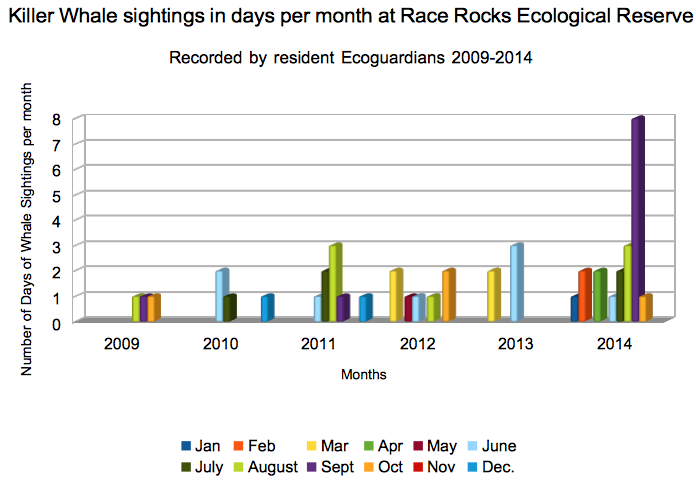 We believe that the increasing frequency in recent years in the number of humpback whales observed in the area which will be affected by increased tanker traffic from the Kinder Morgan/ TMX project has not been taken into account In the Consultant’s report (Stantec) issued today “ Quantitative Assessment of Increased Potential for Marine Mammal-Vessel Interactions from the Trans Mountain Expansion Project TRANS MOUNTAIN PIPELINE ULC TRANS MOUNTAIN EXPANSION PROJECT –-Prepared by: Stantec Consulting Ltd.

——As a result, humpback whales were assigned a proportion of time in the study area of 0.17 (i.e., two months of the year) based on the largest concentration of sightings from the BC CSN data (British Columbia Cetacean Sightings Network 2013)”

Here is a good example of how a decision having long term implications regarding the welfare of a species recovering from near extinction may be completely misdirected if based only on a consultants interpretation of officially published scientific resources which have quickly become dated.

In our role as intervenors for the Board of Friends of Ecological Reserves we are having to point out issues such as this. We are concerned that if such misleading statements are accepted now and form the basis for regulation of the oil transport  industry,  the policies to address the issues of increased potential for whale strikes and ship traffic exceeding the threshold of noise which would severely impact whale communication will never be properly addressed.