See the PDF of this report here:Dakota-Bowl-tree-coring-report-July-2014-Snowline-Research

This memo describes the results from tree coring on DK044 cutblock proposed by BC Timber Sales (BCTS).

BCTS’s proposed cutblock DK044 is in the Dakota Bowl area of Mt. Elphinstone at an average elevation of about 900 metres. Much of the site occupies the steep upper slope of a cool aspect (average aspect = NNW) ridge. The BCTS Harvest Plan Map shows the block to be within the CWHvm2 variant.1* The site is at the upper elevational range of the CWHvm2 and is therefore transitional to the subalpine Mountain Hemlock Zone that occurs above. Relative to lower elevations, the climate is cool and snowy. Snowpacks can be deep and persist into late spring so the growing season is relatively short.

On July 28, 2014, our five-person crew cored 13 trees from four neighbouring sites in the area of proposed Silvicultural Unit 2 (SU2; Table 1). Dominant trees were sampled within each coring area with two exceptions:

– Core DK-1: Area A had multiple tip-up mounds and was dominated by relatively small amabilis firs interspersed with large western hemlocks. The tip-up mounds indicate that a multi-tree blowdown occurred in the past. The smooth bark of the amabilis fir suggested fast growth which was likely a result of an open canopy following that blowdown. We therefore sampled the largest of these amabilis firs to help determine approximate year of the blowdown.

I dried the cores then glued them to a mounting block. To help reveal ring boundaries, I cut the core surface perpendicular to the cell walls and rubbed white chalk on the cut surface.

I counted rings under a microscope but did not cross-date them. 2* Cross-dating would be preferable but is much more time consuming and not critical to the goal of this preliminary study, that is, to document total ages. Cross-dating is also more difficult and costly for trees that do not grow in drought-stressed environments. Researchers such as Dr. Colin Laroque and Dr. Jaroslav Dobry have successfully cross-dated yellow cedars on such sites but the signal is more difficult to detect (since trees don’t experience the same ring width variation due to drought stress).

*2 A method used in dendrochronology which helps establish the exact calendar year each ring was formed. This method uses distinctive ring patterns mainly from low growth years (marker years) and it can reveal missing rings and also prevent other errors.

The only way to document the age of a living tree in a wildland setting is to core it. Even then, there are many challenges, e.g.:

– Many old trees have rotten sections and/or hollow centres. Only wood that can be removed from the tree can be counted – any rotten or missing sections lead to an underestimation of total age, that is, rings are no longer present and/or countable.

– Many of these trees are too big for borers to reach the middle (innermost ring). We had an 80cm (32”) borer that wasn’t long enough for some of the trees. We also used two 70cm (28”) and one 60cm (24”) borer which sometimes were too short for the tree sampled. Due to time constraints we were unable to re-core with a longer borer.

All but two cores (DK-1 and DK-5) were incomplete or did not get close enough to the pith (inner ring) to determine age closely based on actual rings. Nonetheless, I believe that conservative estimates of the number of missing rings are still worthwhile and sufficiently accurate to determine the approximate range of ages in a stand. Table 1 therefore includes columns for actual rings (i.e., ones counted) and estimated ages based on a number of measurements:

– Core height divided by 5, based on the assumption that a tree at this elevation grows at a (conservative) average of 5cm/yr in height.

Results are shown as low, medium, and high estimates. 3* All estimates can provide false results which is why I’ve built many conservative factors into the calculations. The range from low to high estimates is a good measure of confidence. If the range is small relative to number of actual rings, confidence is high and vice-versa. I will base most of my discussion on the low estimate but from past experience, the medium estimate is most likely to be accurate, especially for the oldest trees.3 Due to time constraints in submitting this report I haven’t included the formulae I’ve used to estimate ages. I am happy to provide them at a later date in report format. Meanwhile, I have submitted the Excel spreadsheet that includes those calculations.

1. All trees other than DK-1 had more rings than the lower range of age class 9 (250 years). The number of rings ranged from 279 to 1036. Cores at the lower end of that range were either too rotten (e.g. DK-8) or the borer used was too short. That is, the sampled trees were likely older.

2. There are many impressively large specimens of three species in the area: western hemlock, yellow cedar, and amabilis fir. Such sizes would normally be attained by longevity, growing conditions, or a combination of the two. I also noted some mountain hemlock cones in the area but didn’t encounter any large specimens.

3. Though small relative to the dominant trees throughout the site, DK-1 was the largest amabilis fir (Ba) in the first area we cored. Its fast growth relative to other higher elevation sites (69cm DBH at ~120 years old) is likely due to open growing conditions caused by a blowdown with an area of approximately one hectare.4*

4. In contrast to DK-1, yellow cedar is a slow growing species especially under a canopy, as shown by DK-5, which was a similar size but approximately three times older. This younger, smaller yellow cedar is probably evidence of continuous ingress of yellow cedars.

6. The variation in ages also shows these are multi-generational stands. That is, current dominants grew under the canopy of trees that have since died. The stand age is therefore greater than the age of the individual trees.

It is not surprising that old trees, including one well over 1,000 years, were found in this one-day study. Forests at this and higher elevations on the Sunshine Coast contain some of the oldest known specimens of yellow cedar, amabilis fir, and mountain hemlock, e.g.:

– The oldest documented yellow cedar is a stump from the Caren Range dated at 1,835 years.

– Two 1994 amabilis fir cores cross-dated by Dr. Jary Dobry in the Tetrahedron have 750+ rings. A quick estimate of total age allowing for missing rings and number of years to coring height mean these trees are ~900 years old and the oldest ever documented (though not widely published).

Old-growth is not even that descriptive a term in this context especially since the BC Government groups all stand 250+ years old into age class 9. There are many ecological reasons why it is important to broaden that classification since older forests, and multi-generational forests in particular, continue to evolve to create different structure, habitat, and species (especially non-tree) composition. This quick project shows how much information is lost when describing such stands as simply “Age Class 9.” It would be helpful in the future to add age data to broaden the age classifications.

*3 Due to time constraints in submitting this report I haven’t included the formulae I’ve used to estimate ages. I am happy to provide them at a later date in report format. Meanwhile, I have submitted the Excel spreadsheet that includes those calculations.

*4 This is an estimate based on memory since we did not measure the size of this area. 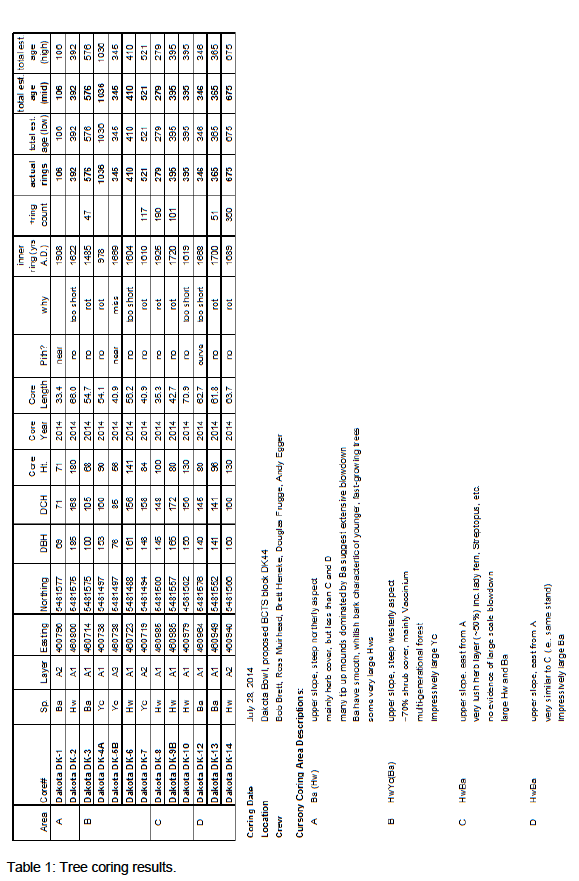 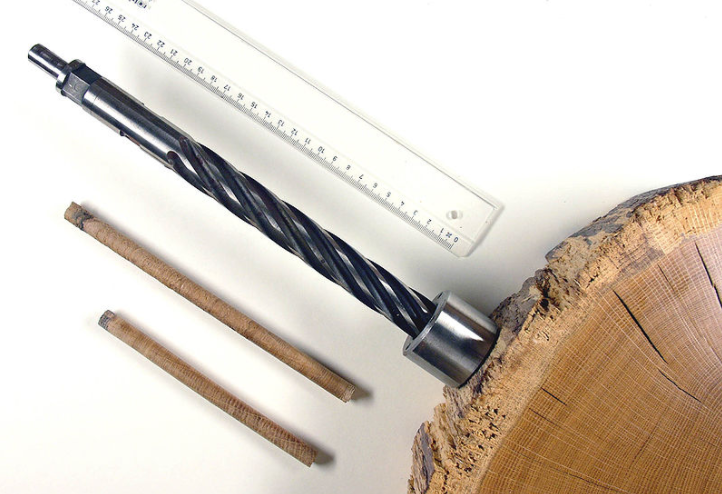