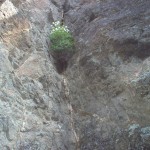 This small Mock Orange, (Philadelphus lewisii) clinging for survival in a cleft in the rocks 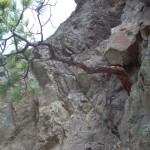 A small Ponderoa Pine(Pinus ponderosa) doing the same,but at a right angle!

Pictures of two of the grasslands on the W side. 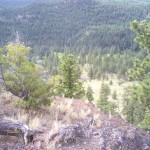 View to the west from the rocks 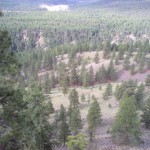 Grasslands to the west.

◦  Laurie goes on to say ” I found no new flora of fauna, but was delighted to casually count 41 red-listed DALLES MILK-VETCH (Astragalus sclerocarpus) on the SW and S slope in their diagnostic seed pods. I did however, find a new insect on a Wavy-leaved Thistle (Cirsium undulatum), 6 beetles that ranged in colour from amber to orange to burnt red. They had varying black marks on the dorsal surface that hinted at wings, The largest had ant-like pincers and antennae. I saw this insect 2 weeks ago on the reserve on a Hoary False Yarrow plant (Chaenactus douglasii). I also found some very large scat on a game trail leading up to the bluff. Scatology is not my forte, but it appeared to be bear scat consistent with a low carb diet of grasses.”

Thanks to Laurie Rockwell for this report .