Ecological reserve Warden Laurie Rockwell reported on his monthly tour of the TCER.

◦    I was in the reserve for 2.40 hours,plus travel to and from, under ideal conditions-10 degrees at 7am, little wind and sunshine.
◦    I saw or heard 15 species of birds including a calling Pygmy Owl (Glaucidium sp),a seldom seen or heard Hairy Woodpecker (Picoides villosus), 5 blue-listed Gray Flycatchers (Empidonax wrightii) and the first ever Townsend’s  Warbler (Setophaga townsendi) (species #81). I was sure that I flushed a Common Nighthawk (Chordeiles minor) off a trail, but since they seldom arrive before the last week in May, I can’t be certain.
◦    many plants were in flower including the red-listed Dalles Milk -Vetch (Astragalus sclerocarpus). I found 7 plants of this species outside the N-S fence,where I saw one last year. There is a good crop of flowering Meadow Death Camus ( Zigadensus venenosus) and Arrow-leafed Balsamroot (Balsamorhiza sagittata). I pulled out 3 more Sulphur Cinquefoil (Potentilla recta) plants and few Diffuse Knapweed (Cenaurea diffusa) rossettes. The Dalmation Toadflax (Linaria genistifolia) plants are hard to see right now among the tall grasses,but I hope that bio-control keeps their numbers in check this year.
◦    a lone frog was calling from the very dry talus slope along the N-S fence, a first for this dry, waterless reserve.
◦    the only insect was a small, nondescript fly; no mammals were seen.
◦    fence repairs are outstanding at the 12 golf green (gate and fence) as mentioned previously. The E-W fence at the top of the west ridge needs to be tightened up and a post replaced. One post at the top of the east ridge,where previous repairs were done, needs to be replaced (noted previously). Finally 2 fence post rock cribs, 100m south of similar repairs made last year on the talus slope, have collapsed.
  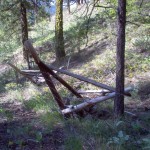 Fence in need of repair. 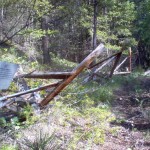