This report was submitted by Bill and Bev Ramey  who were accompanied by Kurtis Hayne and Heather Ulmer.

ER #76 – April 12, 2014
Sunshine, 17 degrees C, moderate wind picked up around 1pm, but then died down by late
afternoon.
Water level at Mission: 0.3 metre to 1.4 metre
Water level at Hope: 3.7 metres (Possibly our lowest water level for a visit)
Launch kayaks at 10:45 am, returned by 7:15pm
At the car parking area before the gated access to the boat launch, we were approached by the
owner of the adjacent farm, who drove up on his small motorcycle. He was pleasant. We
exchanged stories of the ‘idiots’ who drink, throw garbage and party, damaging his fields and
putting his cattle at risk. He had hoped that the boat launch when put in would be treasured by
the public, but with the ‘yahoo’ element, and not enough Regional District park operations staff,
installing the gate that closed access to the boat launch seemed the only solution. We asked if
we could leave a vehicle beside his home overnight if we do visit the reserve overnight (we do
not want to leave a vehicle in the parking area by the gate overnight), and he said that was fine
and gave us his phone number to contact in advance.
We were accompanied by prospective wardens, Kurtis Hayne and Heather Ulmer. Having
worked as canoe guides with youth on fast moving large rivers in the Edmonton area, they were
skilled with paddling a canoe out to the islands.
We ferried across the river channel and landed about 300 metres northwest from the Ecological
Reserve’s eagle nest in the group of largest cottonwood trees. This nest was again occupied,
with both eagles visible at times throughout the day, and with one eagle sitting on the nest. We
did not need to carry our kayaks across any gravel bars on the paddle across, and were able to
detour around one shallow bar.
Walking on the gravel bar upriver, we observed 30 common mergansers loafing in the quieter
water just below the large accreting sand and gravel area on the northwest side of the reserve.
We walked up to that large accreting area to check whether garbage had been left by the large
group of people camped there last fall. It all looked clean. We did notice the diggings of an
animal, rooting after early spring growth of a plant, and observed several holes about 6” deep.
(We’ve seen this before, same time of year.) We headed further upriver towards the upper tip of
the islands. Bill had commented on the number of beached vehicle tires, having counted six
tires. Kurtis walked towards the next tire for a closer look, and spotted a Burrowing Owl glaring
over the tire’s rim. We all observed the owl at that distance (about 20’), not wanting to approach
closer and cause the owl to fly off, especially with raptors and crows in the area. This meant that
we could not see whether it had leg bands. Location of sighting:
GPS location NAV 83 (accuracy + 4 metres)
10U 0571614
5448142
We subsequently reported the owl to Lower Mainland rare bird sightings (Jude Grass), to Denis
Knopp (who said they used to observe BUOW on spring migration in Chilliwack area about 20
to 30 years ago), and to Mike McIntosh of the Burrowing Owl Conservation Society of BC. For

future reference, Mike explained bands on the legs: “a green over black BC band on the right and
a US Fish and Wildlife silver band”. He wrote that he “hoped this owl was moving north to join
others in the interior but, it’s hard to say. The timing would certainly indicate it, as our owls are
returning right now to sites in the Nicola Valley and the south Okanagan. I saw a few 2 weeks
ago on the Guichon Ranch and there are 3 or 4 already spotted at release sites in the Richter
Pass area”. He also noted that a Burrowing Owl had spent the winter in the Tofino area.
We continued to the tip of the island, where we observed a large flock of 35 Black-bellied
Plovers, several in full breeding plumage. They were loafing on the river rocks, right at the edge
of the river. In the rocks here we noticed an insect, which was later identified for us by Al Grass
as: stonefly (Order Plecoptera). There are 9 families in North America with 600 species (Eaton
& Kaufman, Insects of North American).
The upper end of the island had 9 visible fire pits (only minimal garbage) and the “toilet box”.
Walking downriver towards the central gravel swale, there were 4 more fire pits along that shore.
That shoreline (southeastern) is eroding. Noted extensive beaver activity with many chewed off
young trees. Observed a garter snake.
In the wide interior gravel/sand swale there were tracks of what appeared to be a motorized trail
bike. Also shotgun shells and particles of clay discs (skeet pigeon) used for target practice.
A fixed wing aircraft flew over us as we walked down that interior swale. The plane then
returned and made three passes over the northeastern gravel accreting shoreline, where it landed
on the third pass, rested a few minutes, and then took off. This landing was near where we had
observed the Burrowing Owl. Kurtis ran back up the approximate 1 km distance, and observed
the owl was still there.
In the deep water inner channel that runs perpendicular to the Fraser flow, we observed 80
mallards, 2 Killdeer, a Greater Yellow Legs, a juvenile Red-tailed Hawk, and also a small toad.
The Fraser water level was so low that we were able to wade across the lowest end/outlet of that
inner water channel. We waded across downriver from the area of the largest cottonwood. As
we climbed up the bank to walk through the older, vegetated inner channel, we observed four
small toads. Later by email, Denis Knopp was asked about the small size of these toads, and he
replied:
It’s not uncommon for the small toads at this time of year to be as small as in the fall.
Most amphibians are not feeding until it is at least 8degreesC and usually much higher,
so they have had very little appropriate weather since fall. Without warm weather they
can’t digest their food and there are few invertebrates active. The demands of winter
keep them from growing till about this time of year. In another month they will be much
bigger. Four toadlets of that size are common if you are anywhere near the area that
they emerged from the pond in the fall.
We hiked across, through the lower islands along the internal vegetated old swales. The shaded
pond area was almost dry, but there were about six large egg mass clumps lying on the mud as

that shallow pond had almost dried up. We later emailed photos to Denis Knopp for
identification and he replied:
The eggs are definitely Northwestern Salamander. As for when they will hatch that will
depend on the temperature in the egg mass. I do not know the lengths of time
Northwester Salamander eggs take to hatch, shortest period and longest period. Eggs of
the species I know can hatch in less than a week to over a month. From my work in the
field I would expect them to hatch the beginning of May under normal conditions.
We next came out to the shore of the main Fraser River southern channel. There were five fire
pits along this shore. We then walked down the gravel swale between the two large downstream
islands. We bush wacked across the southwestern island to view its shoreline, and saw that it has
continued to erode, now back an estimated 20 to 40 feet inland. This eroding shore has about a
10’ sheer drop to the river level, with trees toppled over. In 2004, this area had the larger trees
growing on it, compared to the more open inner meadow where the grow-op was located.
Noticed two mourning cloak butterflies.
Near the downstream tip of the Ecological Reserve, in the area of the large pond, Kurtis and
Heather observed a grouse-like bird that ran up the bank. We climbed up the bank to check
further and Bev heard grouse-like wing beats through the trees, but nothing visible. She had
earlier heard two distance thumping sound series like a ruffed grouse. Possibly this was the bird.
Ruffed Grouse had been observed on the island decades back, but not since 1992.
At that large pond we looked closely for bull frogs, but saw none.
We viewed the downstream tip, and noted that the fast moving water channel has much less
flow, and a barrier bar appears to be forming at its top end, with several trees and their root balls
grounded there.
Returning upstream along the northwestern shoreline, we observed an astonishing large number
of ducks in the slow water moving channel on the northwest side of the ER, and on both the ER
shoreline and the shoreline of the accreting island just across that slow moving water. We
estimated about 1600 in total, with half Mallards and half American Wigeon. There were 12
Double Crested Cormorants loafing on a log grounded on the shore of the accreting island. The
ducks moved off as we approached. There were about 20 spent shotgun shells along the ER
shoreline in this area. 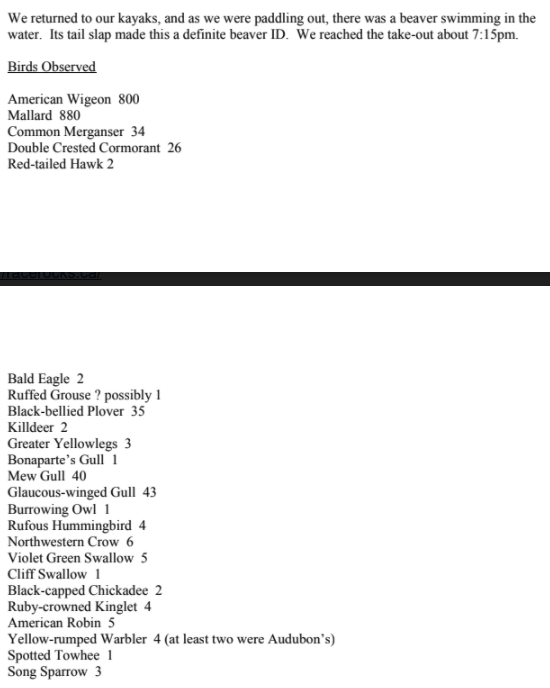 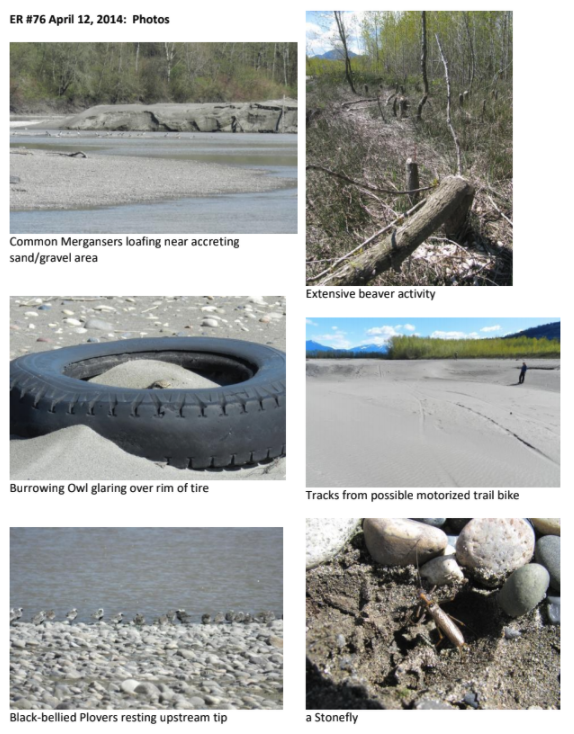 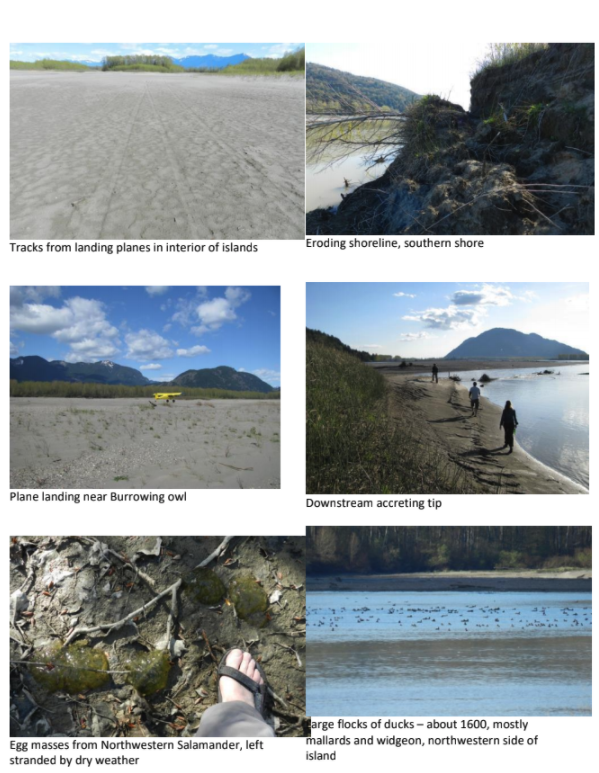