Draft Regulatory Strategy (in revision to publish the final version)

There are marine areas of Canada’s oceans that are globally and nationally important to the survival of many species of seabirds. The federal government has enacted legislation to conserve and protect these marine areas. The Canada Wildlife Act allows important marine wildlife habitats, particularly for migratory birds and endangered species, to be set aside as National Wildlife Areas for the purposes of wildlife conservation, research and interpretation.

Why establish a National Wildlife Area around the Scott Islands? 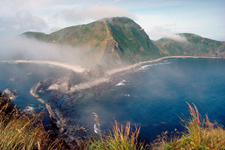 Map of the Scott Islands

The draft conservation goals for the candidate Scott Islands National Wildlife Area are:

2 As part of the overall Health of the Oceans Initiatives, the Government of Canada has made a commitment to designate a National Wildlife Area to protect marine foraging habitats of the seabirds that nest on the Scott Islands.