Warden’s report by Garry Fletcher:  In the early morning hours of January 14, a new elephant seal pup was born at the Race Rocks Ecological reserve. This was the 5th pup born to a female called Bertha since January 2009. Ecoguardian on the island Alex Fletcher reported that it was born in the night, some time before daylight.
Today the mother and pup can be seen from the remote-controlled camera 1 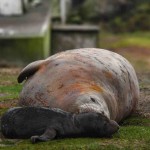 Bertha and new pup a few hours after birth 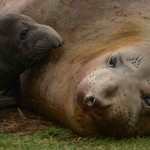 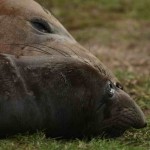 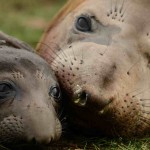 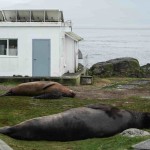 The male Chunk in the foreground 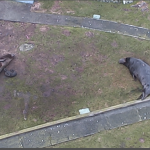 He approached the pair once during the day, mouthing the pup but not being agressive to it. 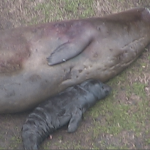 Pictures from the top of the tower using remote camera 1 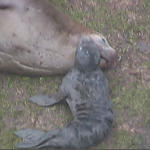 mother and pup are vocalizing frequently 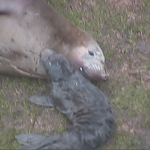 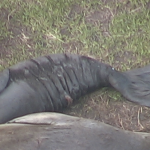 Umbilical cord of the pup 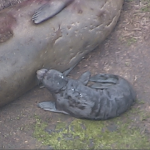 The pup trying to nurse but probably too early. 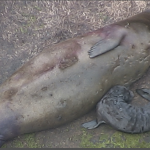 motehr presents herself for nursing but no luck today so far

All the elephant seal files I have been doing over the past dozen years are available in links from:
http://www.racerocks.ca/mirounga-angustirostris-taxonomy-and-image-file/

We have also been sent pictures today of the newborn by Pam Birley of England . Pam is a regular observer on the remote cameras. 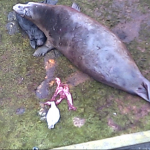 Placenta being taken by Gulls. A raven was also seen with it later. . 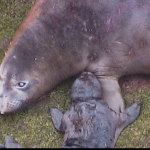 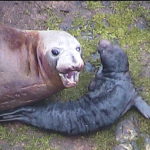 Bertha will have to fend off the male Chunk if the baby is to survive the next few weeks.

The first birth by Bertha was in 2009
http://www.racerocks.ca/first-elephant-seal-born-at-race-rocks/
that one survived but just.
In 2010 and 2011 the pups were killed by a very aggressive male  called Misery… fortunately he did not show up this year. but he did breed with Bertha last year. So this is probably his pup.
http://www.racerocks.ca/biography-of-misery/
In 2012, a pup named Squall was born , she survived , see pages from the tag: http://www.racerocks.ca/tag/squall/
She is identifiable by the crook in her right front flipper.
In 2013,  Bertha returned in February and was bred at Race Rocks by “Misery”, but did not have a pup

Each year since 2009 there have also been several pups born out at Middle Rocks, just North of Great Race Rocks.. one was also born there last week but it also met the usual fate of being washed off by an Easterly that often hits at this time of year.  Fortunately the main island , Great Race Rocks is high enough that it is protected from that.
http://www.racerocks.ca/11326/

The males can be  very aggressive and the female has to do a job of fending him off. They are mainly interested in breeding so when the pup gets in the way it can be fatal. The pictures of the first pup born , Ninene show what she went through, and she barely survived.

Unfortunately the colony is not large enough to have a guardian male protect the herd of pups from other males as they do in the US.