Warden’s name; Joan Best
Number of volunteer hours logged; 37
Mileage; 360
Extent of Reserve visited; all the lower reaches and part-way up the cliff bases. Not yet the complete
network of gullies. Entire fence checked.
New species observed; none. Public access issues; none.
Signage; continued use of signs on the western fence for shotgun target practice, obviously. All other
signs OK including the large sign dealing with prescribed fire.
Maintenance issues; thanks to the work done on the fence, none. Means more time for observing
and monitoring! We are very careful when entering the Reserve at any point other than the sole  gate. I carry with me a collapsible stool so we can, at any fence post, climb into the Reserve without putting any strain on the wire. At any time the stool has been forgotten or we’re too
far from the vehicles, we roll under. This could be a problem in tick season!

Visitor activities; on June 9 a work party to repair the fences spent several hours on the task. Area
Superintendent Amanda Weber-Roy and Rangers Kirk Densmore and Kelga and myself carried out extensive patching and tightening. We met an area rancher who mentioned that occasionally cattle have entered the Reserve from above so we will watch for that. June Knight, naturalist from Blackpool and a friend of fellow warden, June Kitamura, came along on two outings to help identify plants. 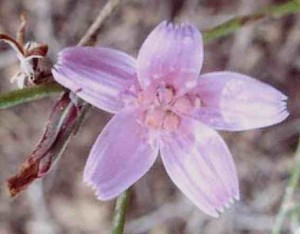 Warden’s activities; still checking the fence. Noted that some droppers are in need of being replaced. Had intended to get that done but didn’t manage it; will attend to that in 2014! I still have some droppers and the fencing kit which includes the new wire-ties for affixing droppers in position.  One more trip was made to bring down the last coil of barbed-wire from the project begun in 2012. Took all the coils in to the scrap metal dealer, a few at a time, as they are so difficult to handle. Eventually, the bits of wire trapped under or embedded in dead trees may have to be picked up. This will be checked from time to time. (Occasionally, as I pass by the access to the Dew Drop Flats going to/from town, I drive out to the end of the main fence just to check.  This is not counted in the report).

In 2014 we plan to explore the head of the deepest and largest gully on the Reserve. Also, June  and Kats, accompanied, possibly, by Helen Knight, want to do at least one traverse of the upper reaches of the Reserve. We have no idea where the northeast corner is and are unsure of the northwest corner also.
Research; none

Management; as mentioned in the 2012 report; would like to see the sites of previous researches cleaned up and may do so ourselves if authorized. Alan Vyse’s research involved the placement  of several seed catchers and multiple square plastic tags pegged to the ground. We may simply  ask Alan and invite him on a trip with us. Metal tags affixed to trees will, of course, remain in  place even though some are in fallen trees. We could also ask Alan if we could have some  copies, to the extent possible, of his research. Older plots, those set up for post-prescribed burn
research and for which we do have the results, are still in place but most have been ruined by  fallen trees. There is also the matter of the transects set up in August of 2011. We offered to  “read” them ourselves and have, between us, most of the forms, etc., needed but cannot be sure  of doing the job as scientifically as may be required! We were advised to stay away from the  actual site until 4 years had elapsed but we could practice somewhere in the general area!  Sarma could likely advise on this as she was part of the group setting up the transect.  Looking forward to an interesting and productive year in 2014!