Black oystercatchers on the Front Line for Oil Spills.

On December 16, I  accompanied a tour to Race Rocks Ecological Reserve. On board was Todd Golumbia who, while working  for Environment Canada out of Sidney, Vancouver Island,  was involved with research on the Black Oystercatchers of the Salish Sea. (See research papers below) 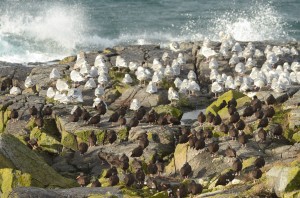 Over 100 Black Oystercatchers in this January 2013 photo.

Today there were 31 Oystercatchers  in their favourite roosting area in the winter, on the south side of the energy building. This isn’t quite as many as January 8  of 2013, when this photo of over 100 was taken by Ecoguardian Alex Fletcher:

Although Race Rocks was not included in the nesting sites surveyed by Todd,  he was pleased to be able to see the orange band on one of the birds he had banded in the Gulf Islands. There is also a band on one individual in this image  from a year ago.

Go to the Taxonomy for more images and other references on the Black Oystercatcher.

See Ryan Murphy’s images of Black Oystercatchers taken when he was an Ecoguardian at Race Rocks.

The results of the Fall 1999 collection of shells from the midden of the oystercatchers showing their food preferences.

From the references below, it is clear that given the relatively small population of Black oystercatchers nesting on the Pacific Coast of Canada,  we can see the urgency of protection of their habitat, the rocky intertidal shoreline. The proposal to increase tanker traffic from the Kinder Morgan Pipeline Proposal puts all our Southern Vancouver Island Ecological Reserves at great risk . Race Rocks lies within three nautical miles of the vessel traffic lanes in the Strait of Juan de Fuca 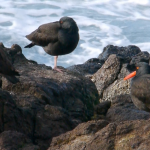 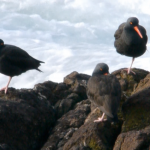 Below I have included several of the Ecological reserves of the Salish Seas which had populations of oystercatchers included in the nesting surveys carried out by Todd and his team in 2009.

Some excerpts  from the research papers provided by Todd Golumbia:

EXCERPT only — see the full version:Butler & Golumbia BLOY
There is growing interest among some conservation agencies to use the Black Oystercatcher (Haematopus bachmani) as an indicator of coastal ecosystem health. Its propensity to re-side year-round on the seashore of the North Pacific, the relative ease of assessing population sizes and reproductive success, and its dependency on intertidal food make it a good candidate to measure change to rocky shore ecological communities (Hartwick 1978; Hartwick and Blaylock 1979; Wootton 1992; Andres and Falxa 1995; Hazlitt and Butler 2001; Hazlitt and Gaston 2003). The species also is nowhere abundant and data are scant to assess changes in abundance. Vermeer and others (1989) con- ducted the only region-wide survey of nesting Black Oystercatchers in the Strait of Georgia in 1987. Hazlitt (2001) suggested the Strait of Georgia population was undergoing an in- crease based on Christmas Bird Counts and the number of nesting birds on a few islands.

One measure of how well a population is faring can be assessed by how it uses its breeding habitat. Populations that are reproducing and surviving well should fully occupy the best habitat, periodically use marginal habitats, and have a surplus of sexually mature non-breeding individuals (‘floaters’). We should expect an oystercatcher population that is faring well to occupy the best nesting islands each year and marginal islands in some but not all years, with sexually mature non-breeding individuals being present in the region. Oystercatcher pairs were more successful when they nested on gentle slopes close to intertidal foraging areas than when they nested in steeper areas with little intertidal foraging habitat (Hazlitt 2002). In populations that are faring poorly we might expect fewer islands to be occupied each year with a disproportional loss occurring on———-see the full version:Butler & Golumbia BLOY

Collaboration across jurisdictional boundaries using common survey standards for Black Oystercatchers Haematopus bachmani has provided an opportunity to estimate population status in the Salish Sea. Our results indicate that the 2005/06 breeding population of Black Oystercatchers in the Salish Sea was about 210 nesting pairs. Standardized surveys at selected locations can be useful in monitoring trends in the breeding population through time. Continued federal, state and provincial collaboration is recommended on this and other inventory and monitoring programs for species that cross jurisdictional boundaries. Most oystercatcher nesting sites in the Salish Sea are protected through restricted public access and conservation-focused management, although potential threats to nesting sites remain.

Inventories of Black Oystercatchers in the Salish Sea and elsewhere have highlighted the need to investigate productivity at the local level while also evaluating larger movement patterns across the breeding range of oystercatchers. Surveys of nesting areas on the outer coasts of Vancouver Island and Washington, and continued surveys within the Salish Sea, may elucidate relationships among these nesting areas and their relative importance to regional population dynamics (Tessler et al. 2007).

Understanding of winter habitat use and seasonal movements within and among nesting areas is limited. At present, coordinated banding of adults and chicks is being undertaken to provide information on those topics. Webster et al. (2002) note that advances in telemetry, molecular population genetics and stable isotope analysis can further an understanding of migratory connectivity, including ecological and evolutionary relationships between populations of migratory birds. In summer 2009, biologists with the WDFW will deploy very-high-frequency transmitters on 20 adult oystercatchers, with captures planned to occur primarily in the San Juan Islands (unpubl. data). Although no genetic or stable isotope studies are currently proposed, such approaches would also be useful in establishing relationships between birds within and adjacent to the Salish Sea.

Abstract. The Black Oystercatcher (Haematopus bachmani) is an intertidal obligate along North America’s Pacific coast and a species of high conservation concern (population size 8900–11 000 individuals). Understand- ing birds’ movements and space use throughout the annual cycle has become paramount in the face of changing environmental conditions, and intertidal species may be particularly vulnerable to habitat change due to anticipated sea-level rise associated with climate change and increasing coastal development. Conservation of the Black Oyster- catcher is hindered by a lack of information on the species’ nonbreeding distribution, seasonal movements, and habitat connectivity. Using satellite (n 19) and VHF (n 19) radio transmitters, we tracked Black Oystercatchers from five breeding sites (Vancouver Island, British Columbia; Kodiak Island, Prince William Sound, Middleton Island, and Juneau, Alaska) through one and one half annual cycles (May 2007–Dec 2008). We documented me-dium- to long-distance migration (range of migration distance 130–1667 km) in three populations (Prince William Sound, Middleton Island, and Juneau) and year-round residency in two others (Kodiak and Vancouver Island). We observed variation in the timing and length of migration by study site, and individual birds demonstrated fidelity to breeding and nonbreeding sites. We did not observe strong migratory connectivity. Migratory oystercatchers distributed themselves widely along the coasts of British Columbia and southeast Alaska during winter. Results provide baseline information on the Black Oystercatcher’s movements and space use throughout the annual cycle.

Laskeek Bay, BC white band on the left leg, below the knee, plus metal band on the right with a year-code color above it (for known age birds); adults of unknown age all have light green metal on lower right leg

Kodiak:— yellow darvic band (no engraving) with metal USGS band on right leg plus yellow band and another color band on left leg