This report was submitted by Laurie Rockwell.

A very warm morning, 22C at 7.45 and no wind. The sky was covered with cloud and forest fire smoke, so sunlight was diffused.  It was very quiet. The reserve is unusually green (grasses) for August, despite many dead and dying plants. I saw/heard 13 species of birds including several ‘murder’ of crows flying over the reserve, which is highly unusual. No fledged birds were seen. There were 5 species of plants still in flower. I dug out 5 Sulphur Cinquefoil plants that I missed earlier, so they were in seed. There has been a resurgence of Diffuse Knapweed and I found only 2 plants of many I pulled that appeared to have had roots damage by beetle larva. I found a new plant for the reserve, #130, a single plant of SPOTTED KNAPWEED (Centurea brebersteinii;  I much prefer the old species name of maculosa!).  There are more toadflax flowers on the SE slope than I expected, but seemingly few seed heads. For some reason there are almost no flowers on the SW slope. I saw no mammals and only one small bear scat, no doubt because the Saskatoon berry production was reduced. 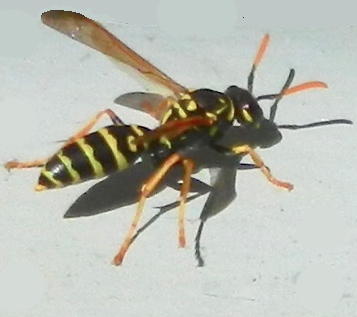 I saw many Yellow Jackets, a few grasshoppers and 2 butterflies.one I think was a Fritillary. There was no sign of human activity. fence repairs are still needed. I plan to put up some new ER signs this fall.