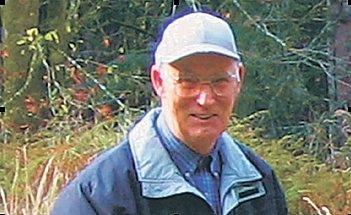 Syd Watts, our long time Ecological Reserve Warden of Mount Tzuhalem, died on May 25, 2013 at Cowichan District Hospital. He had been unwell for some time and valiantly tried to get well so that he could be back in the outdoors he loved so much. Sadly, this was not to be.

In 1984 Syd and his wife Emily were instrumental in having a part of Mount Tzuhalem, which had beautiful flower meadows, set aside as an Ecological Reserve. Since then Syd has been the warden, or as some say the ‘eyes’ of the reserve, visiting it at least twice a week.

In 2007 the Environment Minister Barry Penner recognized Syd Watts’ devotion and presented him with the Volunteer of the Year Award for his long- term contributions to Strathcona Provincial Park and the Mount Tzuhalem Ecological Reserve. Sadly Emily passed away several years ago and wasn’t able to share Syd’s recognition but her name is forever linked with Syd’s in the preservation of the Mount Tzuhalem Ecological Reserve.

In 2005, the FER LOG featured an article on Syd by Genevieve Singleton and Dave Polster. Here is a small snippet of this article:

“Less than 5% of Garry oak woodland and associated spring flower meadows still exists in its natural condition on the earth. Mt. Tzuhalem Ecological Reserve is unique as it is an excellent example of this habitat. Located on the south slope of a mountain used in the past for logging, then for recreation and now in the process of being heavily developed, the pristine state of this reserve is a wonder but by no means an accident. This is almost entirely due to the commitment and dedication of one couple, Syd and Emily Watts. When locals of the Cowichan Valley think of the Mt. Tzuhalem Ecological Reserve, they think immediately of warden Syd Watts.

Over the years, the exceptional involvement of Syd and his late wife Emily in the protection of special ecological places has encouraged others to get out and explore Vancouver Island. See the Friends of Ecological Reserves WINTER 2005 LOG for the full article at: https://www.ecoreserves.bc.ca/newsletters/LOG0512.pdf

“Syd made his first trip to Strathcona park in 1949 . In 2010 the name of Syd Watts peak, endorsed by Strathcona Parks, was officially proclaimed for a mountain. This was already an extremely well-established name, identified in Hiking Trails III and similar climbing guidebooks, and is routinely used by Strathcona Park staff and visitors.

In 1952, Syd joined the Outdoors Club of Victoria and the Alpine Club of Canada. Syd led many trips with these groups. In 1958 Syd and Harry Winstone formed the Island Mountain Ramblers, a hiking group with an Island focus. From 1958 to 1964 Syd, Jack Ware and Don Apps explored all the high ridge routes in Strathcona Park. Syd then documented these trails for the guide Hiking Trails III. In 1959 Syd led the first post war trip to the Golden Hinde. Starting in 1965 he began the project of planning and building the Marble Meadows Trail which involved leading work parties until 1970. It was in 1970 on a week-long trip with Jack Shark that Syd and Emily climbed [Syd Watts Peak] for the first time.

The FER website has references to the many articles written about Syd: https://ecoreserves.bc.ca/?p=17895