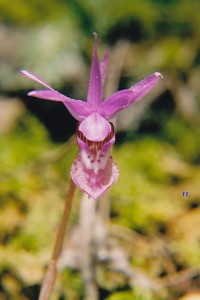 May 1: I made several visits to the reserve in May.  The first was on May 1, when a frosty morning became a clear, warm day.  I heard a number of birds singing, including Yellow-rumped warbler, Orange-crowned warbler, Townsend’s warbler, Pacific-slope flycatcher, Hammond’s flycatcher, Pacific wren, White-crowned sparrow, Golden-crowned kinglet, American robin, Brown creeper, NW crow, Raven and a hummingbird!  There were over a hundred calypso orchids in bloom on the edge of the reserve.  There was standing water in the first creek, but no water in the second.  Wild vanilla was beginning to grow in the woods.  The bluffs were very dry and the moss crunched underfoot.  But a seep of moisture still ran down the bluffs at one point and I noticed that a cluster of pines, fir, arbutus and juniper grew at the base of the seep.  Hairy manzanita was in full bloom with white flowers and kinnikinnik with pink.  Saskatoon was flowering.  Oregon-grape and spring-gold sported sulphur yellow flowers, sea blush was beginning to flower along with blue-eyed Mary, field chickweed, chickweed monkeyflower, wild strawberry, common camas and meadow death-camas.  Chocolate lilies were almost over, also grassland saxifrage.  Parsley fern and Indian’s dream fern sprouted new growth, but I did not find the least moonwort this time.  Orchid leaves showed, pacific dogwood was beginning to flower in the woods.  I met two hikers in the woods that day.  The weather continued warm for over a week in early May, reaching at least 26 degrees  in downtown Courtenay; then it turned cool and wet.

May 17: My next visit to the reserve was just a quick trip down to the beach on May 17, where I cleaned up some twenty cans and bottles of beer at one campfire site.  I didn’t have time to look around however, so Charley and I made another visit on May 23.

May 23: This trip was made  particularly to check out the meadow campsite after the long weekend.  People had obviously had a fire in the pit there, but amazingly there was almost no garbage left, just some celery and orange peel!  No cigarette stubs even, although alder branches had been torn from trees presumably to toast hotdogs.  After being pleasantly surprised with the meadow condition, we walked up to the bluffs.  The mosses and lichens were doing much better, plumped up after all the rain.  The rocks were quite slippery in places with algae growth, so not too much exploring.  There was still a little common camas, spring-gold, field chickweed and sea blush.  Sticky cinquefoil, small-leaved montia, a sandwort and strawberry are all in flower and woolly eriophyllum and silverback luina are just beginning.  We met four people on their way down from the bluffs, and heard several more talking as they hiked up the road through the reserve.  There are fresh motorcycle tracks through the reserve.  And still a few calypsos left, very nice to see.  Next weekend is the Fish and Game Conservation Show.  There has been no move by Timberwest to try and block off ATVs from the trail to the reserve, but I think they may do some roadwork ahead of the show and I’m keeping my fingers crossed they do a little work for us.  Helen and Robbie Robinson have arranged for a stall at the show and I’ll be helping out as I can.  That’s my report! PS, I think the reserve is an ideal place to follow plant phenology, so next year I hope to keep a closer eye on when various plants come into flower.