Weather: Cloudy, sunny breaks, temperature about 8 degrees C, strong wind picked up during day and by afternoon there were whitecaps on Fraser River with waves running upstream.

Purpose of tour: to review the boundary of the ER, with focus on the accreting and eroding shorelines. During the Wardens’ tour in fall 2011, Dr. Michael Church, Professor Emeritus, UBC Geography Department, presented a series of aerial photos to show the islands’ evolution over the past 90 years. He explained how the ER islands have been shaped by the river, with flood flows eroding in some places and depositing sand and gravel elsewhere. Those parts of the islands that have been relatively stable for some time now support large stands of cottonwood trees and other well-established vegetation.

Background: ER#76 was established for “the conservation of the only remaining unaltered and uncommitted lower Fraser River floodplain islands”. Located in the gravel reach of the Fraser, the islands are formed, shift and disappear through erosion and accretion. As a result, the existing boundary does not include some of the islands. In the discussion on historical changes to the islands, Dr. Church suggested that rather than drawing a line around the existing islands, a better approach for the long term, to best encompass the shifting islands, would be one of the following:

a) include the gravel platform which is the base for the existing islands, although this does gradually change,

b) extend the boundary to the deep water channels of the Fraser River flowing past the gravel platform, OR

c) extend the boundary to the high water mark (up to the dykes) on either shore of the Fraser.

The (c) option would be the best delineation, but would likely be the most complex to establish.

Tour: Wardens Bill and Bev Ramey were joined by BC Parks South Coast Regional Planner, Jennie Aikman and her partner. We landed about 10:15am on the upstream tip of the ER and explored the upper islands, walking out to the large accretion area forming to the north and its large sand dune bank. We continued to the slow moving inner channel separating the upper and lower islands and then walked back upriver through the wide, inner gravel channel, which was dry at this water level. We also observed the active erosion along the southern side of the ER islands, with several cottonwood trees toppled into the river. We departed the ER about 1:00pm. Strong head winds were blowing upriver.

Birds observed: Large flocks of birds were observed, but due to wind, cooler temperatures, and our walking route mostly across the gravel bars rather than within the forest and vegetated swales, we observed and heard very few song birds. However, the large flocks of birds were impressive. Hundreds of swallows were swooping low over the river, feeding right close to the water surface. The swallows were visible from our put-in location and all the way downriver to our take-out, and visible throughout the day. Both Tree Swallows and Violet-Green Swallows were observed. It is difficult to estimate the number of swallows as they fly as individuals in

continual different directions. Viewed from the ER, looking out over the Fraser River channel, there were easily 100+ swallows in sight at any one time. Mew Gulls were also observed in large numbers. About 150+ were loafing on the gravel bar at the upstream tip of the ER. A few Glaucous-winged Gulls were mixed with this flock. Another large flock of shorebirds (200+) where loafing on a separate gravel bar just to the north of the tip of the island; they flushed up, flew in formation, and returned to rest. These shorebirds were identified from distance as Black Bellied Plover, due to size and black breast and armpits.

A Bald Eagle was sitting on nest, the same nest and location observed in past years Another adult eagle was observed flying over. Other bird species observed were Canada Goose (2), Mallard (6), Northwestern Crow (4), American Robin (2), Spotted Towhee (1), and Pacific Wren (1).

Other Wildlife: Interesting what appeared to be the digging holes of an animal, about 8” deep in the sand dune accreted area on north side of ER upper islands; about 20 scattered holes were observed, likely several weeks old, and appeared to have been dug to reach the roots of equisetum. Several snails observed. Tracks observed included: deer, fox (?), beaver (and beaver activity chewing branches). 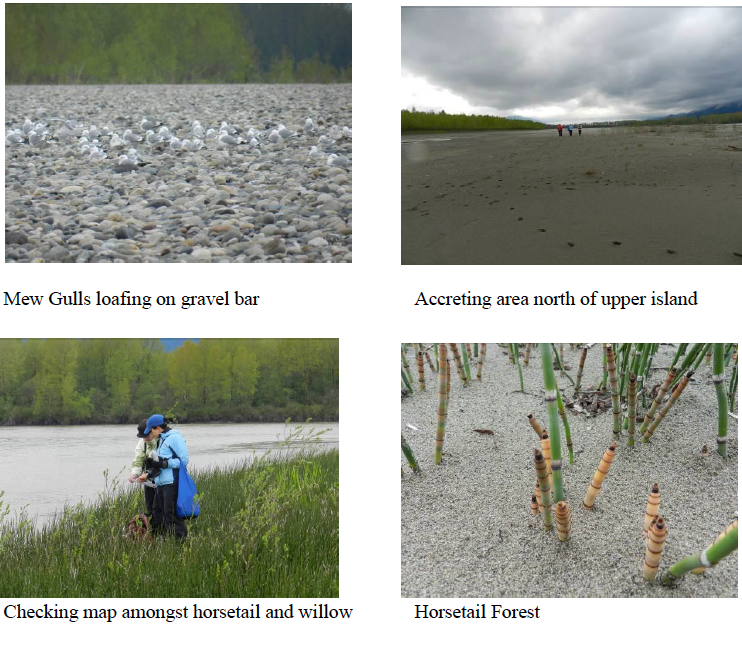 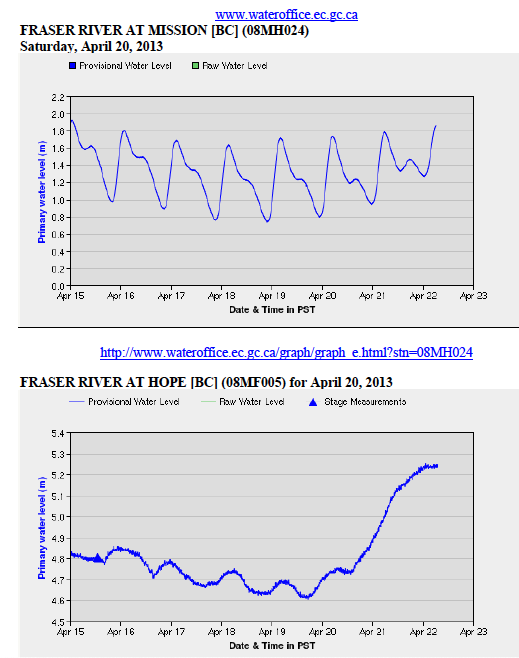