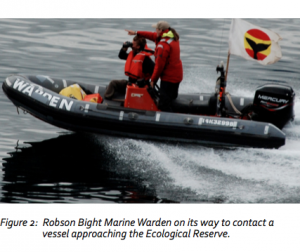 The RBMBER Warden Program began in 1987 and was operated on yearly contracts until 1991. During 1991 – 1999 the program was operated by Bion Research Inc. Subsequently, Beaveridge Contracting operated the contract from 2000 – 2002. The John- stone Strait Killer Whale Interpretive Centre Society (JSKWICS) operated the program in 2003 and 2004. At the end of the 2004 season the JSKWICS board of directors decided that the marine education programs (Robson Bight Warden Program and Strait- watch) they were managing were limiting their ability to focus on their core objectives of managing and developing the Telegraph Cove based Whale Interpretive Centre. They encouraged the employees who had been operating the marine programs to form a new society to operate these programs. Cetus Research & Conservation Society (Cetus) was established in January 2005 for this purpose. Cetus has operated the warden program since 2005. During the spring of 2010 a partnership was formed between Cetus and Yukusam Heritage Society to jointly manage the Warden Program. The Cetus – Yukusam Partnership is a natural fit to operate the Warden Program as the objectives of the Warden Program, as outlined in the recommendations of the Johnstone Strait Killer Whale Committee, parallel the goals of the Cetus – Yukusam Partnership.

These goals include:
• ensuring that whale disturbance is reduced in the area of RBMBER;
• enhancing public understanding of the RBMBER and whale watching guidelines; and
• conducting vessel/whale monitoring to assist in the development of long-term management strategies.