Since 1997 we have been seeing individuals and sometimes small flocks of Brown Pelicans (Pelecanus occidentalis) visiting Race Rocks Ecological Reserve, often in the fall of the year.  Lester Pearson College hires an ecoguardian to live at Race Rocks and they and one of our remote camera viewers have frequently  reported and photographed the occurrences of these birds.

See the Brown Pelican (Pelecanus occidentalis) file in the taxonomy of  www.racerocks.com

This year, ecoguardians Mike Robinson and Alex Fletcher have taken  telephoto pictures  of some of the birds and sent them off to contacts in California to report them. It happened that the one photo included the leg tag with a number visible, so getting history of the bird was possible.

Pelicans all in a row : photo by Alex Fletcher

In the following week another banded pelican, which had previously been spotted at Ogden Point ( see below)  showed up.  So both are documented here.

Here are the e-mail exchanges that resulted between Mike Robinson and Jay Halcomb of the International Bird Rescue, San Francisco enter:

“Tuesday, November 20, 2012
Subject: Pelican R36
To: Jay Halcomb
Hi Jay,
Really glad to have noticed that band when processing the pictures! We’ll keep an eye out for more bands. Here are a few pics that I have, and please check out http://www.racerocks.com and http://racerocks.ca/wp/ .

This is a great sighting.  It is the furthest north that anyone has sighted one of our pelicans banded as part of our pelican rehab program.  R36 is a first year bird that came into our rehab program with fishing tackle injuries.  It as rehabilitated and released on August 23rd in Sausalito, CA.  We release them just under the Golden Gate Bridge so they have access to the ocean.  A number of these young birds that were released in SF bay area or in LA seemed to have followed the adults north.  Good to see and to know about.  We have had a number of reporting’s in Oregon and Washington. R36 has not been reported until now.

Thanks so much for reporting it.  We will probably put up something about it on our web site.  If you have any pictures would you be willing to share them?  I am attaching some files that you may be interested in.
Thanks again!  This is an amazing sighting.  Jay 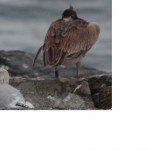 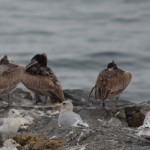 R41 and possibly R36 together at Race Rocks 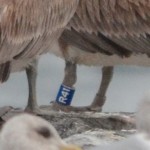 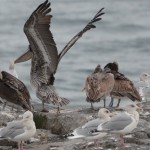 Later R41, who had been spotted in Victoria (see above), also showed up at Race Rocks 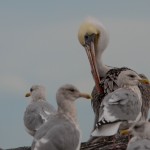 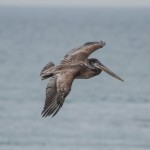 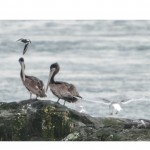 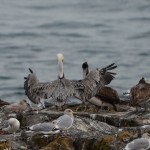 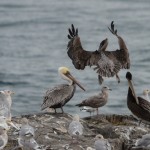 All photos by Mike Robinson 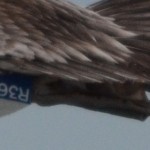 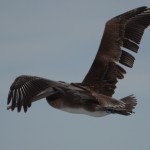 A week later we received the following message from Jay about a second sighting of a tagged pelican that had been rehabilitated in California:

Hey guys,
A woman just reported R41 at James Bay Boat Launch, Ogden Point, Victoria, BC yesterday.  That bird was rehabilitated at our San Francisco Bay facility.  It was another first year bird that came on in July 20th very cold, weak and contaminated.  It was contaminated with fish oil and water from people cleaning their fish.  Its a problem in some areas at least in California.   Anyway, the bird was washed and rehabilitated and released in SF Bay on August 23rd along with R36.   This is the first time it has been sighted.
Thought you might be interested.
Jay
Jay Holcomb
Director

—and then R41 showed up at Race Rocks as well….

From Mike Robinson
Monday, November 26
Subject Re:R41
To: Jay Halcomb
I just noticed R41 in one of the photos I took last week… I think the second banded one in the pic is R36…There have been about 6 around all week but it got cold last night and I see none today…
Best,
Mike

The International Bird Rescue Center has this quote on its website:

“(2012) Over 900 pelicans were admitted to our hospitals this year, a record for us. Pelicans and other aquatic birds are important to all of us because they are critical indicators of ocean health. And every day, we see how they’re affected by environmental problems when they’re brought to our hospitals by people like you, people who care about what happens to them. Helping them now ensures the conservation and protection of these species for generations to come.”
All photos have been taken by Mike Robinson and are included with his commentary on the Race Rocks Log  for November 9, 2012      and November 20, 2012.