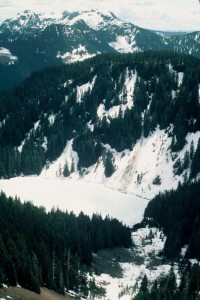 The reserve consists of steep rocky south, east and northeast-facing slopes of a subalpine ridge and the upper parts of associated colluvial slopes. The ridge extends southeastward from Green Mountain in the Nanaimo River drainage.

BIOLOGICAL:
Major plant community types in this reserve are stunted mountain hemlock and mountain heathers along the ledges and crest of the ridge, sparse moss, lichen and herbaceous plant cover on rocky knolls and faces and meadow vegetation on talus and other colluvium. The latter is the main habitat of the Vancouver Island marmot. Several different meadow communities occur, with dominants such as pearly everlasting, bracken fern, cow-parsnip, showy sedge and Indian hellebore, depending on drainage and soil texture. Rare plants occurring here are the Olympic mountain aster, the Olympic onion and the coastal wood fern.
The Vancouver Island marmot, a species endemic to the island for which it is named, had only about 250 individuals in its world population in 1993. Though related to the hoary marmots of the mainland, this island form has evolved in isolation for thousands of years, resulting in very distinctive characteristics like its chocolate-
COMPOSITION
brown coat. Marmots occur only high in the mountains of the southern half of the island. Similar to other marmot species, Vancouver Island marmots inhabit burrows, usually dug under protective boulders, and hibernate between October and May. They live in small scattered colonies and feed on a variety of herbaceous meadow plants and a few low shrubs. The population declined so rapidly that Haley Lake had no marmots. In 2009 there were 30 individuals that were descendants of reintroduced individuals (Don Doyle, Ministry of Environment biologist). Other mountain wildlife such as Roosevelt Elk, American Black Bear, Cougar, Wolves, Marten, Golden Eagles and Gray Jays may also be seen in this area.