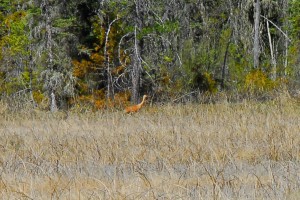 Mara Meadows has a pair of nesting cranes which reappear every spring.  In 2010 they were seen with one healthy chick.  In 2011 three cranes were seen in the Meadows on several visits.  It is assumed that this was the nesting pair and the offspring.  It has been several years since a successful mating season was last observed by then warden, Peter Bailey.