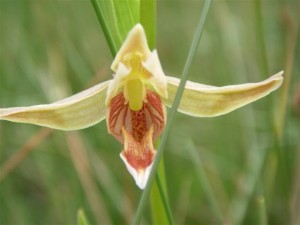 Mara Meadows was set aside as an ecological reserve largely because of the unique variety of orchid species in this calcareous fen.  Giant Helleborine, Epipactis gigantea is a blue listed orchid and is also called  Stream Orchid.  Over the last two summers many new plant locations have been found and there are hundreds of plants hidden around the meadows.

Where do giant helleborines grow?

What are we doing that harms giant helleborines?