This report is from the Shuswap Naturalists Club:

Mara Meadows Ecological Reserve
This Reserve was established in 1972 to protect unique calcareous fens. Fourteen of BC’s thirty-two orchid species, including four which are considered rare, grow in these fens. The determining factor in having this fen set aside as an ecological reserve was the rare Liparis loeselii or Bog twayblade which is found in Mara Meadows. The only other known location in Canada is in New Brunswick.  Mara Meadows Ecological Reserve is a small but very important reserve and worthy of protection and close monitoring. 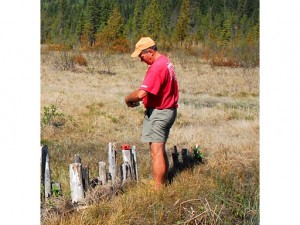 Shuswap Naturalist Club member John Coffey was the Reserve Warden at Mara Meadows for several years.  He monitored water depth and quality and took inventory of the plant species with special concern directed at the orchids.  He also recorded nesting bird species, beaver activity and amphibian and reptile populations.   John died on September 1, 2012, after a brief battle with cancer.

The Reserve is in good condition. The water levels are the most important feature of the meadow and they seem to be normal, though swings between highs and lows were noted on each visit. In other words the water level did not start high in the spring and go to low in the fall as might be expected. Instead it was a much more yo-yo effect this year. It will be interesting to track this next year as well as look back at past years.

A new logging road has been built along the north-west boundary of the reserve and park. This road crosses the north fork of Violet Creek as it flows toward Rosemond Lake. It does not appear to directly affect Mara Meadows. Violet Creek is an interesting stream. It flows into a height of land where part flows south into Mara Meadows and part flows north down to Rosemond Lake. This is very unique.

Two new plant species were found this year. Tufted Loosestrife (Lysimachia thyrsiflora) is a plant of wetlands that is widespread in northern Canada but not common in southern BC. It is most noticeable by its yellow bottlebrush type flowers. White wintergreen (Pyrola elliptica) is a blue listed plant found on the dry access trail into the meadow.   The blue listed Epipactis Gigantea (Giant Helleborine) was found in three new locations this year and is much more numerous than previously thought.

The resident cranes were observed on five of the visits this year. Three cranes were seen together on two separate visits. The assumption is that the young crane seen last year returned with the resident adult pair this year.   The Olive-sided Flycatcher, Eastern Kingbird, Hammond Flycatcher and Northern Waterthrush were among the songbirds observed in the meadow this year.

Here is a list of birds which club member Geoff Styles has identified at  Mara Meadows in the last three years.marabirds

The battle against the mighty oxeye daisy infestation continues but is not going as well as previously imagined.  Many bags were picked and hauled out of the meadow during six of the visits this year. Two plots have been selected to experiment with an optional method of dealing with this invasive flower. As the daisy is a biannual, targeting the juvenile plants may be a better solution than targeting the mature plants.