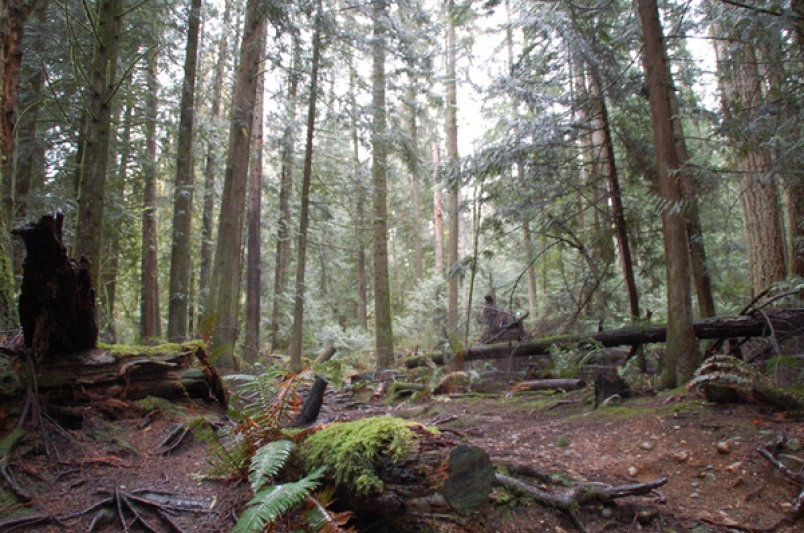 Elphinstone Logging Focus (ELF) wants to extend the boundaries of Mount Elphinstone Provincial Park to 1,500 hectares from the 139 hectares currently set aside in three parcels on the lower mountain slope.- File Photo

Elphinstone Logging Focus (ELF) wants to extend the boundaries of Mount Elphinstone Provincial Park to 1,500 hectares from the 139 hectares currently set aside in three parcels on the lower mountain slope.

The larger park was pushed for by the Roberts Creek community in the 1990s. At that time, however, the Ministry of Forests committed to protecting only three isolated pieces totalling 139 hectares for their old growth, tailed frog and rare mushroom values.

“We feel the day has come now to connect up the three isolated pieces and encompass the lands around the lower slopes,” said ELF member Ross Muirhead.

Currently Island Timberlands is logging on some of the lower slopes that ELF wants saved for a park, and the Sunshine Coast Community Forest has plans to log in the area in the future. More cutblocks in the area are currently up for bid.

Muirhead said much of the proposed park area has been logged over the years.

“Since the late ’90s, up to over 50 per cent of that original proposed park area has been logged, so it’s become quite a fragmented zone,” he said. “And when we look to the future, we can see the intention of the government is to turn the majority of these lower slopes into tree farms where they would just come back every cut cycle and recut those areas over and over again. We’re feeling that is not a suitable situation, and we can’t just walk away from it.”

The park proposal seems to have the support of the residents of Roberts Creek, as is evident in their new draft official community plan (OCP).

The plan states, “Although Mount Elphinstone Provincial Park has been established, there is no management plan in place for its three separate pieces that have no interconnection, and that needs to be addressed. The OCP supports the expansion of Mount Elphinstone Park to the full 1,500 hectares of protected area originally requested for the lower elevations of the mountain declared a protected area and to protect its many diverse habitats.”

Muirhead hopes the Roberts Creek community will go one step further to show their support by helping ELF lobby the government for the park expansion later this month.

“We will be sending out mail-in cards to the residents of Roberts Creek that they can sign and send to the premier requesting the park expansion be a top priority for the government,” Muirhead said.

ELF plans to print 2,000 cards and mail them to Roberts Creek addresses in the next few weeks.

“Then we hope to raise enough money to do it across the whole Coast,” Muirhead said.

He hopes the public pressure will get ELF a meeting with the premier.

ELF also wants to see a moratorium on logging on the lower Mount Elphinstone slopes until an expanded park can be created.

“The necessity to expand the park should be primary over all other development. A moratorium on all cut-blocks in the new park boundaries should be implemented immediately to protect the land while park expansion is considered,” Muirhead added.