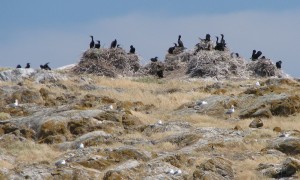 My thoughts on the decline of the cormorants in Georgia Strait are:

1)      Increase in the Bald Eagle population. I have seen eagles sitting on top of the cormorants nests while the adults are flying in circles around the island and finally settling in the water. While the adults are away from the nest, the eggs and/or chicks are then vulnerable to predation from crows, gulls or the eagles, too. I have never seen an eagle actually take an egg or chick out of a cormorant’s nest, but others have.

2)      The decline could also be related to lack of food fish, although there are still quite a number of cormorants nesting at Mandarte Island just 24 kilometers north of the Chains.

3)      Boat disturbance. This area, off the Victoria waterfront, is  popular with local boaters. Within 4km of the IBA there are approx. 800 boats moored at the Oak Bay Marina and the Royal Victoria Yacht Club. Over 30 whale whatching boats operate out of  Victoria Harbour and many stop by Great Chain Island to view birds nesting there. The Whale Watching industry guidelines state that their boats should stay 100m. away from bird colonies. Kayakers galore launch their boats at nearby beaches and the Chain Islets are an easy paddle. The boat launch area of Cattle Point is often full of trailers in the summer.There is a sign posted on Great Chain Island advising boaters of the Ecological Reserve, but you have to get out of your boat to read it.  Whenever I am in the area and I see boats in too close, I advise them of the sensitive nature of the islands.

No one really knows the cause of the collapse in the cormorant populations in the Salish Sea but I think there are on-going studies that may shed some light on this matter. Hopefully the cormorants will return to nest again one day.