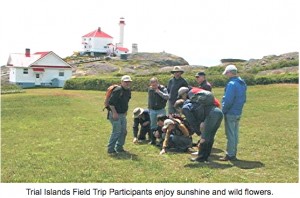 After a night of howling winds, the day we picked for this year’s Trial Island trip dawned bright, sunny and, most importantly, calm! Our usual trip leaders, Adolf  and Oluna Ceska, weren’t available this day, so we were fortunate to have Trial Island Ecological Reserve warden, Matt Fairbarns share his views on the rare flora of this lovely island with us.
Over the years, Matt and his crew of invasive plant bashers have removed a ton of broom, ivy and other invaders from the island. The result of all this work showed in the wonderful fields of camas, some of which had previously been covered in broom. 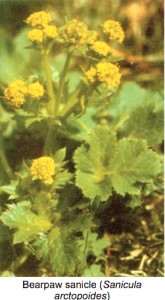 Our old favourites, Golden paintbrush and Bearpaw sanicle were in full bloom, as were lots of other flowers too. 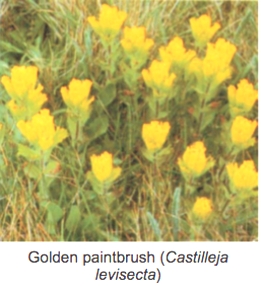 We saw naked broomrape poking their purple heads out from spring gold.

This plant parasitizes other plants such as stonecrop, but in places on Trial Island it is found among the spring gold. Matt showed us an area where virtually nothing was growing as the Canada Geese had moved in.

It was quite a shock to see how destructive these birds can be on the vegetation.

As we continued our journey around the island, Matt regaled us with stories of his botanical exploits, both on Trial Island and other special places around southern Vancouver Island. At one point he was very excited to show us a special little plant called Victoria’s owl-clover that he recently described as a new 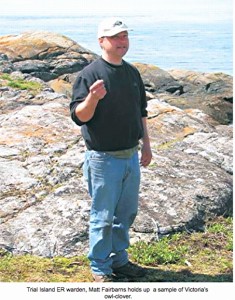 species. Matt says:
“Victoria’s owl-clover is a small, annual wildflower of vernal pools and seeps. Botanists first collected specimens of this plant over a century ago and struggled to identify them until it was recently shown to be a unique undescribed species. It occurs nowhere in the world apart from the Victoria area and the San Juan Islands. It has disappeared from some of the sites where it had been collected over the years and it is now known from only three places in the world. Almost the entire global population occurs on Trial Island. There are several other species of owl-clover in Victoria. They are closely related to Indian paint- brushes but have an annual rather than perennial life history and tend to be much smaller.”
The Friends of Ecological Reserves is fortunate to be able to provide this annual outing to members so they can enjoy and learn about the rare plants on Trial Island Ecological Reserve. We thank Matt for his passionate and interesting tour of the island this year. Thanks also to Phil Lambert and Don Mais for providing safe transportation to the island. 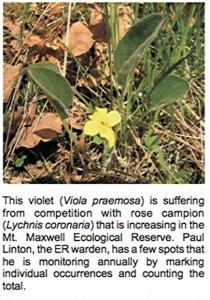 From  THE LOG    FRIENDS OF ECOLOGICAL RESERVES NEWSLETTER    SPRING 2009 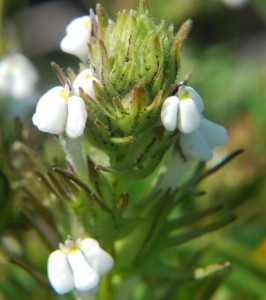 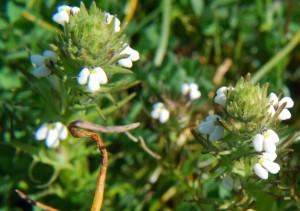