From: THE LOG    FRIENDS OF ECOLOGICAL RESERVES NEWSLETTER
SPRING/SUMMER 2010

Trial Island is an ecological gem and hosts a great number of rare species and ecosystems. The upland mead- ows, maintained free of native trees and shrubs by a combina- tion of summer drought and winter winds, support many endangered species including Golden Paintbrush, Seaside Bird’s-foot Lotus, Bear’s-foot Sanicle, Coastal Scouler’s Catchfly, Dense-flowered Lupine and California Buttercup. Unfortunately, the meadow environments also seem to provide a fine home for many alien invasive species, including Scotch Broom, Gorse, Spurge-laurel (Daphne) and English Ivy. Over the years, many groups have done their best to combat these invasive shrubs with varying success. 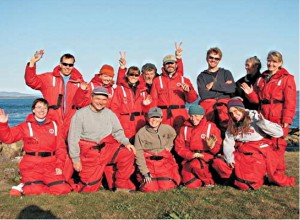 One of the first attempts to control Scotch Broom, was a spectacular failure. Loppers were used to shear off the shoots just above the roots. At first, the cleared meadow looked spec- tacular. Unfortunately, by the following spring, the cut stubs had swollen with scar tissue and had produced abundant new branches. Instead of controlling Scotch Broom, the work crew had just produced an astonish- ing example of “deep topiary”. Attention wandered, and the Scotch Broom infestation on Trial Island appeared to have been forgotten.
In 2003, while I was studying rare plants on Trial Island, I decided to take a shot at the Scotch Broom on my own.

Using secateurs and loppers, I started to clear plants from a small meadow area in the communications lease adjacent to the Ecological Reserve.    I was careful to cut the broom plants just below the root crown checking the cuttings to make sure that there were at least a few root hairs at the bottom to confirm that all of the stem material had been removed. After several days, I had managed to remove every broom plant I could find through a small, but heavily infested area of about 500 square metres.
That autumn, Shane Ford and I cleared Scotch broom from another small area using a weed wrench, but I was unhappy with the damage the weed wrench did to the soil and decided to stick with secateurs and loppers. We also removed a single large gorse
plant but that required a shovel, saw and mattock. Over the next couple of years we slowly chipped away at the problem, but made little headway.
In 2005, Todd Kohler and I prepared a plan to control invasive shrubs on Trial Island, using the Decision Support Tool produced by the Garry Oak Ecosystem Recovery Team.    We were able to persuade the federal government to commit some funds from the Habitat Stewardship Program to start implementing the plan in 2006.
A crew, led by Todd, was hired through the BC Conservation Corps and BC Parks provided boat access to Trial Island for an intensive two-week period of broom bashing in the Ecological Reserve and adjacent communi- cations lease. Canada CoastGuard joined in the fray, supply- ing a boat to carry a volunteer crew of twelve over for a major broom attack that autumn.
The Habitat Stewardship Fund has continued to support the project in 2006-2009 and BC Parks has provided the work crew with boat access to the island each year. Canada Coast Guard provided boat access for volunteers in 2006-2008. By the end of 2008, it was hard to find a single flowering broom plant anywhere on Trial Island. We have also removed a number of other invasive shrubs including Gorse (there were only a handful of mature plants but they were very difficult to control) and Spurge-laurel (which is increasing rapidly throughout nearby areas of Oak Bay and Victoria). English Ivy has been very difficult to control, but we have eradicated isolated “colonies” throughout the meadow areas and pushed back the edges of the major infestations. Occasionally we run into oddities such as non-native yews, cotoneasters and privet.
In a place like Trial Island, which is strewn with rare plants, we must take great care to ensure that “broom-bashing” doesn’t turn into “endangered species-bashing”. I have helped the crews by marking out no-go areas where invasive shrubs had to be removed by specialists familiar with the rare plants that occur there. Crew chiefs including Todd Kohler and Chris Barrett have kept a close eye on the crews to make sure that they worked around endangered plants.
What’s the prognosis? Scotch Broom is a tough customer – it produces enormous volumes of seeds, which can remain viable in soil for up to 30 years. The soil seed bank is gradually depleted as some seeds germinate and others die. There is very little information on how quickly the soil seed bank diminishes. Perhaps with a modest effort we will be able to keep Trial Island free of flowering broom for years to come. In a few more years the number of germinating plants may begin to decline and the worst of the work will be over. In the meantime, we will have to keep attacking the problem twice a year – in the spring when flowering plants are easily spotted and removed, and in the late summer or autumn when large numbers of juvenile plants can be removed with minimal risk to rare species.