From: THE LOG • FRIENDS OF ECOLOGICAL RESERVES NEWSLETTER • SPRING 2006

The Annual General Meeting of the Friends of Ecological Reserves took place on Friday, February 24, 2006 in Room 157 of the Murray and Ann Fraser Building at the University of Victoria. 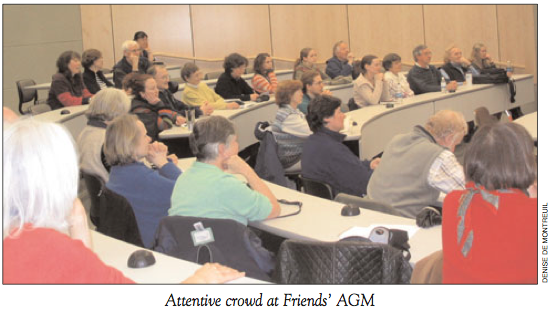 Secretary Tom Gillespie read the minutes of 2005’s AGM and was followed by President Mike Fenger who spoke of the good efforts of all eleven directors during the past year and brought up the subject of organization renewal to be discussed at the next regular Board meeting. He addressed the need to consider recruiting new directors from outside of the Victoria area and of incorporating conference telephone calls to permit their regular attendance at meetings. He spoke of the need to develop a Scientific Advisory Committee to advise us when needed. (See President’s Report, page 4) Mike also expressed delight at getting a resolution passed at the Professional Foresters Conference in Victoria on February 21, 2006 to pursue the development of new reserves in beetle kill areas. He was presenting a paper on Criteria and Indicators when he was invited to put a resolution before the meeting. (The text of his speech appears on page 14 of this issue).
Treasurer Saila Hull gave an overview of our current state of finances and presented a draft budget for the coming year. (See the balance sheet on page 3) The research grant committee reported two proposals which are being reviewed by director Evelyn Hamilton and will be considered at the next Board meeting. Board elections saw the current slate returned by acclamation. Two directors have expressed an intention to step down in the near future indicating that two positions may be vacant. The board is willing to entertain expressions of interest from anyone who thinks they might like to let their name stand and especially encourage interested persons outside the Victoria area.
Following the adjournment of the business meeting, Dr. Tom Reimchen of the University of Victoria’s Biology Department gave a slide show presentation on the Spirit Bear of the mid coast and his concerns about its continuing survival. Named after curator Frank Kermode of the provincial museum, Ursus kermodei was thought to be extinct as early as 1912. They are most numerous today on Gribbell and Princess Royal Island on the mid-coast, not far from the site of the recent shipwreck of the Queen of the North. Its white coat is a genetically recessive mutation and the adaptation was thought in the past to be variously a glacial relict or a random neutral geographically isolated mutation that did not offer any evolutional advantage. 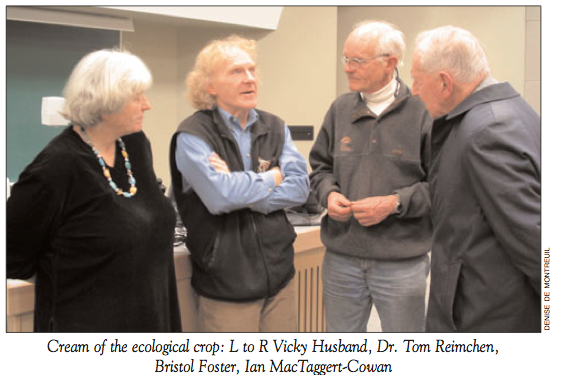 Since these theories did not fully explain the presence and survival of the mutation, Dr. Reimchen and his team went to Gribbell for further testing. His study looked at (among other things) the interaction between white and black bears based on when they were active, which was dominant and what the difference was in salmon capture success between the two colours. He found that on Gribbell Island which has the highest percent- age of white bears, the whites had a foraging advantage during daylight hours. It seems their white coats allow them a 50% increase in success rate over blacks as they are less visible to salmon, perhaps not standing out as much against a cloudy or bright sky.
The crowded meeting room fell into shocked silence as Dr. Reimchen delivered the truly bad news: the only salmon stream on Gribbell has been trashed by logging. There is no riparian zone left. It is an impene- trable tangle of logs and branches meaning that bears are unable to drag captured fish away from the stream as they do elsewhere. The follow-on benefits to mosses, liverworts, shrubs, trees, insects, birds and other mammals from the fish remains left by bears is mostly lost as a result.
The statistics present a dismal picture. The 1950–1960 biomass of salmon on Gribbell was 4,352 kilograms. It fell to 838 kilos in the 1990–2000 period, an 80% reduction in the amount of protein available for bears and by extension, everything below them on the food chain. Dr. Reimchen considers Gribbell a keystone island because of the white allele concentration in the bear population there. Gribbell has the highest occurrence of white bears as a percentage of the total of black and white of anywhere on the mid-coast. Nonetheless, the proposed Kitasoo Spirit Bear Protected Area announced with great fanfare by Premier Gordon Campbell on February 7 of this year does not include Gribbell Island. ■
See “Websites of Interest” on page 16 for links to the announcement and to information on the Spirit Bear.

(Sorry about the cumbersome link but it defeated all attempts at abbreviation.) The announcement is accompanied by a backgrounder explaining the different levels of protection within the area, and a factsheet on the Kermode or Spirit Bear. A government map of Kitasoo can be found at www.mediaroom.gov.bc.ca/ Download.axd?objectId=75

For an analysis of the different land
uses within protected areas, go to www.raincoast.org/. Raincoast Conservation Society’s website also provides extensive information on threats to the rainforest from oil and gas activity, clearcutting and fish farming.

One of the environmental organizations consulting on the Kitasoo Spirit Bear PA is San Francisco based ForestEthics who claim to “pioneer a new approach to environmental activism by focusing its efforts on the marketplace”. Their policy is to inform corporations about how their practices contribute to deforestation and advise them on a more sustainable path.

If they prove resistant, ForestEthics mounts a public information campaign to mobilize consumer pressure. They are legendary in the U.S. for their “Victoria’s Dirty Little Secret” campaign aimed at the Victoria’s Secret lingerie catalog giant and are involved in a number of environmental campaigns in B.C. Their website is at www.forestethics.org/.

If you have a high tolerance for bad bear puns and want to know more about bear species worldwide, go to www.bearden.org/. On this kid-friendly website, you will find loads of informa- tion on bear anatomy and behaviour, habitat and adaptation, captive breeding programs and human/bear interaction. Although it does not specifically mention the Spirit Bear, this is a good general site covering species from the panda to the sloth bear.

For a slide show of the work of B.C. photographer and activist Ian McAllister, go to www.grist.org/news/maindish/ 2004/10/29/raincoast/#. Ian and Karen McAllister spent seven years visiting every unlogged valley along a 2,000 kilometre strip of coastal rainforest. They followed this up by publishing Great Bear Rainforest: Canada’s Forgotten Coast (Harbour Publishing), a coffee table book dubbed “an act of treason” by some,
by others as “the book that saved the rainforest”. Ian’s work can also be seen in the publications of the Raincoast Conservation Society.

Still hungry for more images of Spirit Bears? Ron Thiele is a Calgary based photographer whose portfolio includes some dazzling shots of spirit bears taken on Princess Royal Island. When he isn’t providing photography services for corporate clients, he leads photography tours to spirit bear habitat on Princess Royal and Gribbell Islands. View his work at www.ronthiele.com. ■