From:  THE LOG   FRIENDS OF ECOLOGICAL RESERVES NEWSLETTER       AUTUMN 2008
By Jane Watson 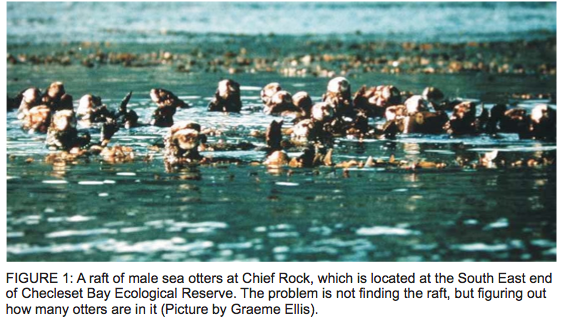 Checleset Bay Ecological Reserve was established in 1981 to protect habitat for a fledgling population of sea otters reintroduced into the area between 1969 and 1972. The reintroduction was successful, because by 2007 the BC sea otter population had grown from the 89 introduced animals to over 3500 otters (Linda Nichol DFO). As part of a coast survey of otters, we have conducted annual counts of sea otters in the Ecological Reserve since 1987. The results of these counts suggest that the number of otters within the reserve has varied from about 600-900 animals since about 1995. Our estimates have increased slightly over the years, 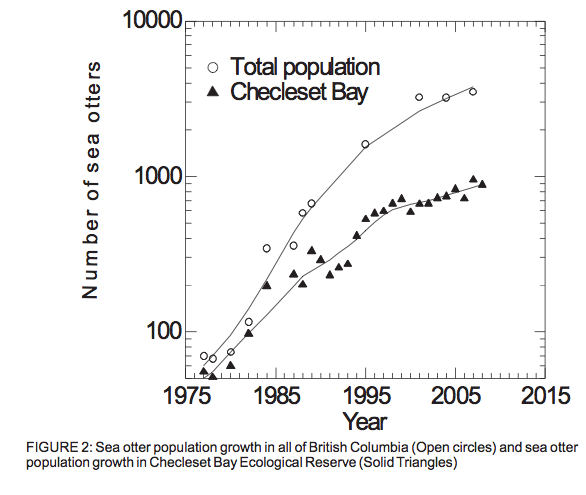 Our ability to count sea otters also improves with time, because sea otters are creatures of habit, and we have grown to know their patterns. Sea otters segregate by gender, with groups of females using certain areas, and male groups using other areas. The otters gather in large rafts, at predictable locations year in year out, so our biggest difficulty is not finding the otters but sorting out flippers from heads as we try to count individuals in large moving rafts of otters (Figure 1). It is this aggregating behaviour, along with the dependency of sea otters on their fur to keep them warm, that makes sea otters so susceptible to oil spills; in the event of an oil spill a large number of animals can become simultaneously oiled. Knowing where otters gather and their approximate abundance is very important in planning how to respond to an oil spill.

The other part of our long-term research has been to document the changes to nearshore community structure brought about by sea otter foraging. Sea otters are important nearshore predators that prey on invertebrates. By eating grazers such as sea urchins, sea otters indirectly reduce grazing pressure which in turn increases the abundance of kelp. When sea otters were re-introduced into Checleset Bay, profound changes occurred; as sea otters ate sea urchins, kelp abundance increased.

We have been monitoring these changes since 1987 at a series of permanently- marked sites located in and around the Ecological Reserve. We visit each of these sites annually and document changes in kelp and invertebrate abundance. In addition we have temperature loggers which record daily water temperatures at each site. We have seen some remarkable changes. Sites such as the one at Union Island (just outside of the Ecological Reserve see Figure 3) 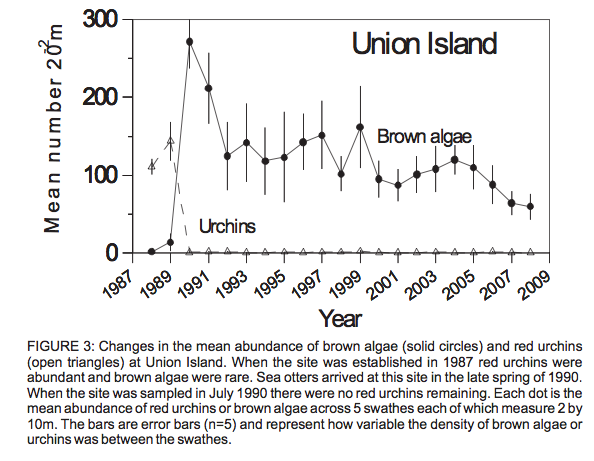 underwent dramatic changes when otters arrived; the urchins disappeared and kelp increased. At Union Island, as most of the sites, the first kelps to settle were opportunistic annual species such as bull kelp Nereocystis luetkeana. These kelps are gradually replaced by longer-lived perennial species such as the giant kelp Macrocystis integrifolia and the tree kelp Pterygophora californica (Figure 4). 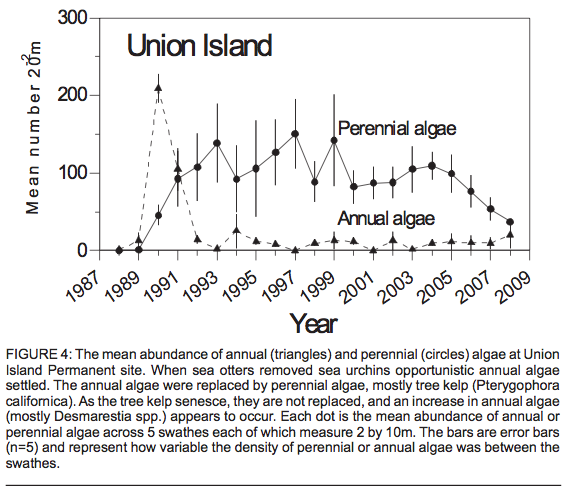 Once established, the abundance of the canopy forming Macrocystis is thought to be affected by factors such as water temperature and winter storms (warm water during El Nino events and winter storms reduce Macrocystis abundance). Tree kelp, which lays annual rings in its stipe (stalk), appears to be less affected by water temperature or storms as it does not reach the surface and forms a canopy about 2 metres off the bottom. It is a long-lived species that lives up to 20 years.

At our sites, tree kelp settled shortly after sea otters arrived. This resulted in a Pterygophora population composed of individuals spanning a narrow range of ages, not unlike a logged area that has been replanted with trees. The consequence is that as the tree kelp ages they senesce within a few years of each other. As these plants die, they are being replaced by an opportunistic annual species called acid weed (Desmarestia spp.), which forms a dense mat and appears able to exclude other sea weeds. This pattern has re-played itself at almost all of the sites we are monitoring.

We are waiting to see what will happen. Our main question focuses on if and when the tree kelp forests will reform  an event that appears to be occurring at some of our sites established in areas that were invaded by sea

otters in the mid 1980s. It is not clear how many generations of kelp it will take to form stable tree kelp forests composed of plants that span a wide range of ages.

The ability to revisit sites each year to monitor changes has resulted in the longest study of kelp forest community ecology conducted in BC. As ocean climates change it becomes increasingly important that we understand how natural communities vary over time. The long-term studies that generate these types of data require sustained support. Unfortunately this type of research produces results too slowly to be funded by the more traditional funding

agencies. Over the years it is the “Friends” that have provided funding for our long-term research and it is with enormous gratitude that I write this final “official” report. I have enjoyed letting the “Friends” know about the state of sea otters and kelp forests in the Checleset Bay Ecological Reserve and look forward to continuing this tradition, as our research continues. 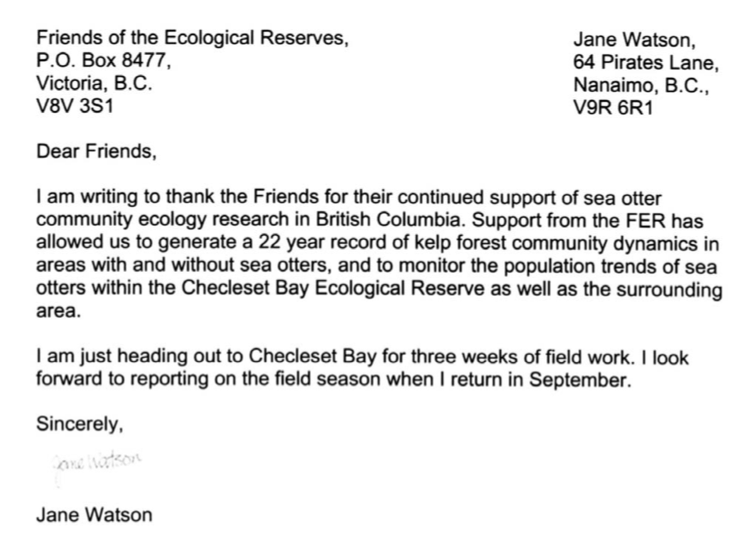