Research and Teaching Opportunities in the Northern Uplands Unit- 2005

From  the fall , 2005 issue of The Aleza lake Research Forest Newsletter.

The Northern Uplands Unit occupies 3,435 ha in the northern portion of the ALRF. The Unit is characterized by gently rolling hills and benches that are dissected in several areas by steep-sided draws and rounded knolls. Fish- bearing streams such as Camp, Firebreak, and Slaney Creeks and their tributaries flow north into Aleza and Hansard Lakes and on to the Fraser River.

Significant areas of uncut mature and old stands are interspersed throughout this Unit including Aleza Lake Ecological Reserve #84 (managed by BC Parks) which forms the approximate geographical centre of the Management Unit. Mature 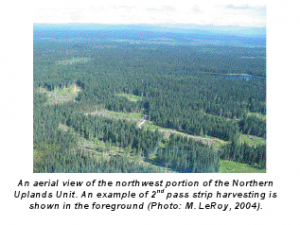 stands are still present in the easterly portions of the Camp Creek headwaters. Some rock knolls and rocky uplands in the northeast corner contain Douglas- fir/hemlock complexes and rare fire-origin spruce stands.

Harvesting began in the north-central portion of this area in1919 upon completion of the railroad. Representing the original Aleza Lake Experiment Station established in 1926, the Unit has diverse examples of silvicultural system trials and partial- cutting methods, implemented between 1945 and 1963 along with 103 operational plots. There are excellent examples of single-tree selection, alternate strip cutting, diameter-limit cutting, clearcut and plantation methods, and mixedwood systems. A spruce progeny trial was also

established in the 60s. The east end of the Northern Uplands Unit has been clearcut logged and planted from the mid-1960’s to late 1980’s, resulting in extensive plantations ranging in age from 15 to 40 years. More recently, uniform shelterwood methods were implemented in the mid-1990s which are monitored through 9 operational plots. Four and a half kilometres of wildlife monitoring transect are monitored as well as 3 kms in the Ecological Reserve. Two long term climate monitoring stations are also located in this area.

An aerial view of the northwest portion of the Northern Uplands Unit. An example of 2nd pass strip harvesting is shown in the foreground (Photo: M. LeRoy, 2004).

Current activity in the Northern Uplands Unit focuses on continuing to use a diversity of silvilcultural systems. In the 2005/2006 logging season, ALRF will harvest two blocks in this Unit, 40.3ha and 29.3ha in size, amounting to 18,000 m3. Two blocks are in preparation for group selection partial cut systems to be harvested within the next two years.

Faculty, students and other visitors are welcome to observe and participate in forest management and monitoring activities at ALRF. Maps showing future harvesting are outlined in the Research Forest Stewardship Plan found on the ALRF website. Research and teaching sites can be incorporated into planning these future sites and other activities. For information contact ALRF staff.