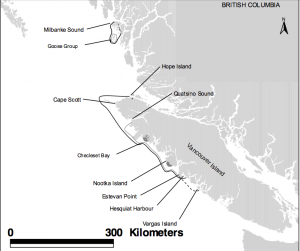 Sea otters were re-introduced to British Columbia from Alaska between 1969 and 1972. The first population count was made in 1977. Since 1988, field surveys have been undertaken using small boat or helicopter, to determine sea otter population abundance and trends in British Columbia. Our goal in this study was to assess the survey procedure in use and to obtain current population counts. The results of this study suggest the present method of estimating sea otter abundance in British Columbia can provide a relatively precise (CV = 7-12%) index of abundance in Good to Excellent survey conditions. Surveys from helicopter and boat, made under similar sea conditions, provide comparable counts. A total of 3,180 sea otters were counted in a complete survey in 2001, 2,673 along Vancouver Island and 507 on the central mainland coast. Watson et al. (1997) estimated population growth to have been 18.6% year-1 on Vancouver Island between 1977 and 1995. The population growth rate on Vancouver Island has declined to 15.6% year-1, 1977 – 2004, and this appears to have taken place since 1995. Sea otters are a density dependent species and populations are limited largely by food. Rapid initial growth followed by a decline in growth rate as portions of the population range reach equilibrium with resources seems to be typical of re-introduced sea otter populations. On the central mainland coast, the sea otter population range is small in relation to the availability of habitat and resources, and thus rapid growth might be expected. Survey results indicate growth has been positive on the central mainland coast from 1990 to 2004, but the fit of the simple log-linear regression is relatively poor and the resulting growth rate estimate of 12.4% year-1, seems low. Further survey effort will be needed to better ascertain the population growth rate on the central mainland coast.