Closed to the public by Order-in-Council no. 1920, on 16 June 1977 to protect nesting seabirds, which are extremely vulnerable to disturbance at this location. A permit is required to land on the islets, and they are accessibly by boat.

The reserve includes a chain of five low rocky islets oriented in a northwest- southeast direction. These are made up of glaciated and wave-worn sedimentary bedrock of the Nanaimo Group, and located between Thetis and Valdes islands in northern Trincomali Channel. The three largest islets have small areas of shallow soil sufficient for vascular plant establishment. Intertidal shorelines are predominantly bedrock. Surrounding waters in Trincomali Channel are mostly 20 to 30 m in depth. Currents are minor, and wave action is tempered by the sheltered location among the Gulf Islands.

Approximately 40 species of plants, including vascular species, bryophytes and lichens, are present on the three largest islets and are uniquely adapted for the extreme environment. These are species typical of shallow soil and rocky crevice habitats subjected to summer drought associated with the cool-summer Mediterranean climate. Herbs, grasses and a few shrubs are present, but no trees. Vegetation patterns appear to be greatly influenced by soil depth, exposure and possibly by nesting cormorants. 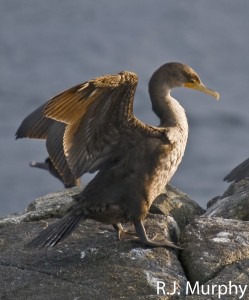 About 180 pairs of Double-crested Cormorants nested here in 1968, but the number declined to 80 by 1975, 33 in 1981 and 12 in 1983. At least 20 pairs of Glaucous-winged Gulls nest on the islets. A few Pigeon Guillemots and Black Oystercatchers occur, and may nest. Several other species of seabirds utilize surrounding waters, especially in winter and spring.
Algae in adjacent intertidal-subtidal habitats include sea lettuce (Ulva sp.), five species of brown algae and 23 of red algae.