An Outing to Rolla Canyon

Clay banks along the Pouce Coupe River in Rolla Canyon

From THE LOG– FRIENDS OF ECOLOGICAL RESERVES NEWSLETTER • SPRING 2006

On June 12, 2005, five canoeists in two canoes undertook a trip down the Pouce Coupe River to reach Rolla Canyon Ecological Reserve. Three biologists/ birders armed with a satellite navigation system were in one canoe, and myself and another member of the Timberline Nature Club were in the second one. 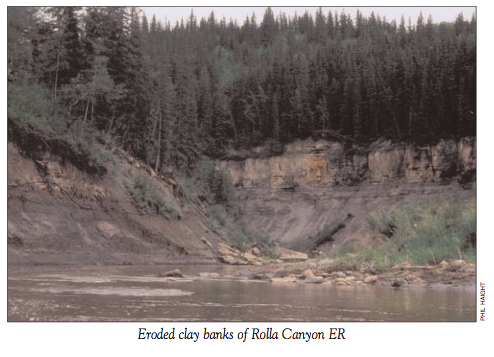 The river offers a very interesting paddle. In places the river is so shallow that it eventually wore two large holes in the bottom of our canoe. And in other places, it is narrow and swift with water cascading over large boulders. There were places where the river tested our limited paddling skills. The entire trip offered very picturesque surroundings with 300 metre banks the whole way. 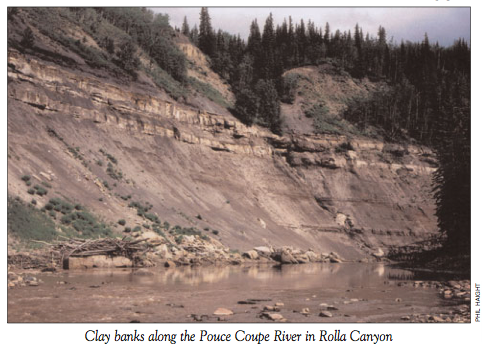 The only evidence of other people being on the river was a place where a fire had been lit, close to the river’s edge. I found out later that it had been a man with his two small dogs. He had left during the day thinking it was a short distance but found he had to stay the night under his canoe. There is also evidence of a few old dumping sites, but none were found in the E.R. itself.

There are no cutlines or signage on the river as you enter or leave the ER so we didn’t know where the boundaries were, but because of our earlier trip in May we recognized when we were in the ecological reserve. We spent some time exploring the reserve, looking for mastodon bones, etc. Some fossils were found but nothing too spectacular. 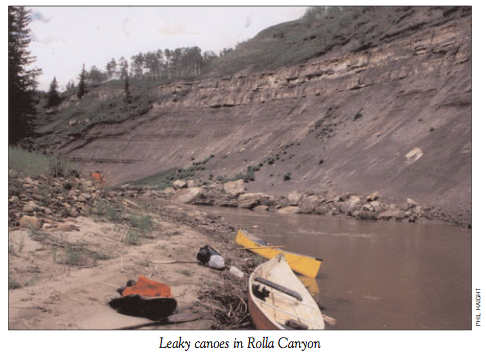 The biologists with the GPS unit recorded all interesting turns and bird nesting areas and also our start and finishing coordinates at the two bridges. A colony of violet-green swallows was recorded at N55,53’ 24” and W19, 58’,30”, north of the reserve. The biologists recorded over 40 species of birds on the 5 1/2 hour trip.

The reserve is a uniquely secluded and nearly inaccessible 43 hectares, completely surrounded by private land. Because of the steep hills and banks on either side of the river up to the flat farm land, the ground is totally untouched and except for a few invasive weeds from above, retains its native fauna. 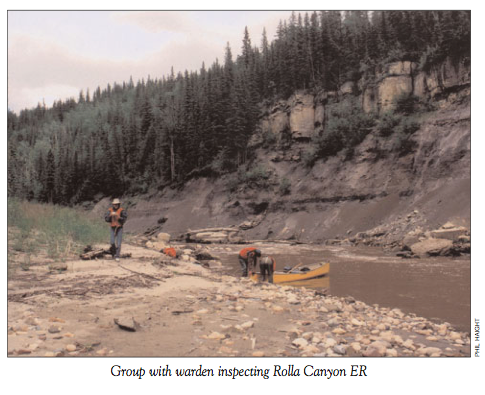 We arrived at the lower crossing at 7:30 PM, wet and tired in our canoe, the duct tape having worn off. A completely satisfying trip it was. There will no doubt be more outings to Rolla Canyon for me, however I will be embarking earlier with a sturdier canoe.
■Phil Haight is volunteer warden for Rolla Canyon Ecological Reserve. Rolla Canyon Ecological Reserve was established to protect the paleontologigal features of the site as well as special natural, cultural, heritage and recreational features. The area made the news in 1969 when Dawson Creek resident and rock hound Ted Williams found a huge mastodon tusk along the river. It was twelve feet long, 32inches around at its widest point and weighed approximately 200 pounds. No management plan exists as yet for the reserve.
■Potential Threats: the risk from fossil hunters is considerably reduced by the inaccessibility of the site. It is an incised sandstone canyon with no direct road access.
■Warden: Phil Haight (see this page for a report on a visit to the reserve by the warden)