Of the 37,000 ha of crown grassland in the Okanagan region, 83.3% overall are under a grazing tenure, mostly grazing licenses. However, when considering just the Northern and Southern Okanagan Basins, 71.5% and 72.3% are under range tenures, respectively (Table 7). Crown grasslands with no range tenure in these basins can generally be found in provincial parks, protected areas, wildlife reserves and ecological reserves, although a few small parcels occur outside protected areas amongst the patchwork of private lands and Indian Reserves. Some of these small crown grasslands may not have an active grazing tenure, but may still be designated as either a crown reserve, recreational area or woodlot. Those crown grasslands without any type of tenure or reserve represent the remainder, amounting to approximately 2,400 ha in the Northern and Southern Okanagan Basins11. These grasslands are particularly threatened by development as they may be sold to private interests by the provincial government. Grazing leases, amounting to 352 ha in the Okanagan Basin, are also subject to private purchase and development. 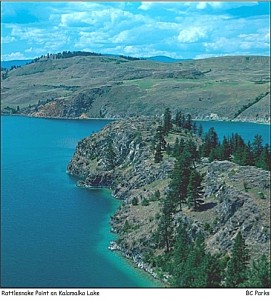