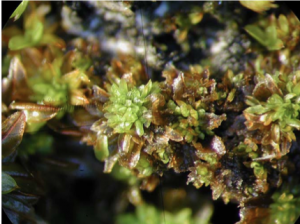 has two varieties: var. laevipila and var. meridionalis, separated by leaf characteristics and the presence of specialized reproductive structures. In British Columbia, S. laevipila var. laevipila can be confused with small plants of S. princeps.
Distribution
Twisted oak moss has a widespread but scattered global distribution: southern South America, Europe, Asia, North Africa, and western North America. In North America, it is found along the coast in British Columbia southwards and inland through Washington and Oregon and into California. It has a relatively narrow distribution in coastal British Columbia, restricted to Garry oak habitats from southern Vancouver Island northwards to the Nanaimo area on Vancouver Island.
Habitat
In British Columbia, this moss is restricted to the bark of trees, in particular Garry oak. Most populations of the twisted oak moss are found on exposed bark of trees in open habitats where the climate is characterized by hot to mild, dry summers and cool to cold wet winters. Most of the habitats in which this species was collected appear stable and undisturbed. There is concern for those populations within city limits or in areas where only older oaks are found, as there is little to no replacement of these older trees. Approximately one half of the populations are located in parks or Ecological Reserves and are protected from tree cutting or further development.
iv
Biology
Twisted oak moss is an acrocarpous moss that grows as small clumps on tree bark, especially Garry oak. It is most readily distinguished by the habitat as well as its diminutive size. The laevipila variety of twisted oak moss produces sporophytes and spores relatively frequently in British Columbia.
Population sizes and trends
Most populations appear to be in good condition and appear stable. There is no specific information on the trends of these populations.
Limiting factors and threats
Limiting factors and threats include tree or branch harvesting, the potential of the death of older host oaks and low rate of recruitment, and, possibly, air pollution, and human disturbance.
Special significance of the species
The Canadian populations of twisted oak moss represent the northern limit of the distribution of this species in North America. It is a characteristic species of the Garry oak ecosystem, one of the most threatened of all native ecosystems in Canada.
Existing protection and other status designations
No legislation, regulations, customs, or conditions protect this species. Globally, both varieties of this species are tentatively considered vulnerable to, possibly, secure, and they are Red-listed in British Columbia.