To provide an undisturbed, intertidal and subtidal study area accessible by road in the Greater Victoria Area

The reserve includes about 450 m of intertidal shoreline along Cadboro Point, and extends seaward for 300-400 m. About 30% of its area is above mean low water, 70% below. Coastal features include a sheltered cove (Maynard Bay), rocky headlands, tidepools, ripcurrent channels and four barren islets accessible at low tide. Intertidal substrates are about 80% bedrock, 10% mixed sand-gravel- mud and 10% sorted gravel. A large intertidal area is exposed at low tide.

Zonation on the rocky shore is typical of southern Vancouver Island. A band of yellow lichen occupies the upper splash zone, followed by a black lichen (Verrucaria) zone which frequently contains the green alga Prasiola. Below this is a sparsely populated band having a few strands of attached green algae and small barnacles, then a wide rockweed (Fucus) zone extending to low water. A few winkles and limpets occur above and within the rockweed zone.

Forty-two species of algae have been noted at one to eight metre depths in Maynard Bay. The only common green alga is Ulva sp. Significant brown algae are Costaria costata, Desmarestia intermedia, D. ligulata and Laminaria spp. Among the 32 species of red algae, many of which form a low turf, Ceramium sp., Odonthalia floccosa, Plocamium violaceum, P. tenue, Laurencia spectabilis and Callophyllis flabellulata are quite widespread.

Typical invertebrates on subtidal bedrock and boulder sites in Maynard Bay are barnacles (Balanus cariosus, B. nubilus), red sea cucumbers, ochre stars, black and gum-boot chitons, sea anemones, pinto abalone and giant red sea urchins. Inhabitants of mud, sand and shell substrates include the blood star, California cucumber, butter clam and cockle. At least 55 species of invertebrates have been recorded in the reserve, of which molluscs, crustaceans and echinoderms are notably diverse

Raised sea levels have been projected as a direct result of climate change, due to glacial melt, increased runoff and the expansion of the ocean water due to warmer temperatures. Changes to the structure of inter and subtidal communities may result in response to habitat loss or degradation from increased storm activity and higher sea level, along with the increased sea surface temperature. Certain species’ life cycle patterns may also change in response to these new conditions, altering the relationship between predators and prey both within the water and above. 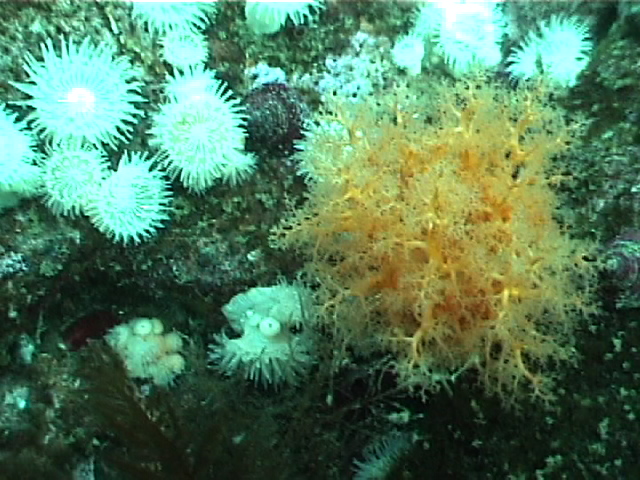