On the list of qualities useful to volunteer wardens perseverance must rate highly. More than a few have been with the program through thick and thin practically from its outset three decades ago. Obviously looking after one ER for a considerable length of time has definite advantages; the ground becomes known, its inhabitants familiar, and risks and problems predictable. Unfortunately it may also become over familiar, perhaps humdrum.

Wardens usually also have another trait, that of inquisitiveness, that prompts them to find out more of what makes their reserve tick, so along with personally giving time and effort in stewardship there is a personal gaining of knowledge and experience. But this too may slow with the passing of time. Would the purposes of the Ecological Reserves program, therefore, be better served if wardens could opt to change their area of responsibility if other reserves were in the vicinity? They would be challenged by new ground to explore, new inhabitants to become familiar with and new problems to understand, and would be able to view these things through the eyes of experience.

There is always a reluctance to abandon that which is familiar but perhaps the greatest disinclination to change might arise because the old reserve is conveniently near and others more distant or harder to reach. Additionally, some wardens may be less than enthusiastic at the idea of turning over all their hard work to someone else and possibly receiving little on their new reserve in recompense: these are personal qualms to put against the challenge and interest of a fresh start on new territory. In the wider picture, there is still a lot of work needing to be done.

Over the past decade Land Resource and Management Plan (LRMP) processes have been held through much of the province, amongst other things setting aside large and small protected areas, some of which have/will become Class A Provincial Parks and others, usually smaller, may eventually be designated as ecological reserves. Just about all of these are in need of documented inventories to provide baseline information of what each contains at the start of its ‘official’ career, to help in formulating management needs and against which future changes can be measured. This is practical work that many volunteer wardens are capable of and would find interesting.

The writer has been volunteer warden at Cougar Canyon Ecological Reserve (#108) for many years and in addition to the usual plant and bird listing has also compiled inventories on butterflies and dragonflies, lichens and mosses. Also an intermittent Painted Turtle count is ongoing at one of the ponds following the protocol recommended by Frog Watch by recording time of day, air temperature, water temperature, wind strength and cloud cover. So long as observations follow the same route each time and roughly the same amount of time spent viewing, the routine has some validity even though not rigorous enough for a scientific study. It is beginning to show interesting results. Since 1996
a definite trend has shown up:

Year—- Average # over all observations—Range

Counts made when the air temperature is below that of the water are ignored as turtles do not emerge to bask under those conditions. Strangely the highest numbers have occurred not only under calm weather but also when the wind has been strongest as at those times turtles tend to congregate at the two ends of the pond where there is greater protection from the elements.

Is there a reason for the increase? Four possibilities come to mind:

■ the tabulator has gained experience and knows where likely to spy turtles and is therefore more successful;

■ predation has decreased … as adults are rarely caught on shore, and neither birds (Gt. Blue Heron recorded only once) nor large fish are present to catch juvenile turtles in the water, this is not a likely proposition;

■ climatic variability has been favourable…recent winters have been less severe than formerly lead- ing to possible greater winter survival;

■ less nest destruction…cattle have access to part of the nesting area; fewer cattle in recent years results in less trampling. Coyote excavation of nests for eggs or juveniles appears average.

Two years ago, additions were made to the reserve following acceptance of the Okanagan/Shuswap LRMP and these areas have been examined to search for new and different features, providing at the same time a little of the excitement of exploration. In another attempt to be useful several years earlier a draft for a suggested Management Plan was drawn up, not to detract from Parks’ authority but to provide a basis that might be of assistance in their present deprived financial and staffing state. Resentfully received, it and all the other material seems to pass into unknown files with never any feed-back.

However Cougar Canyon is a young man’s reserve, steep sided and exhausting 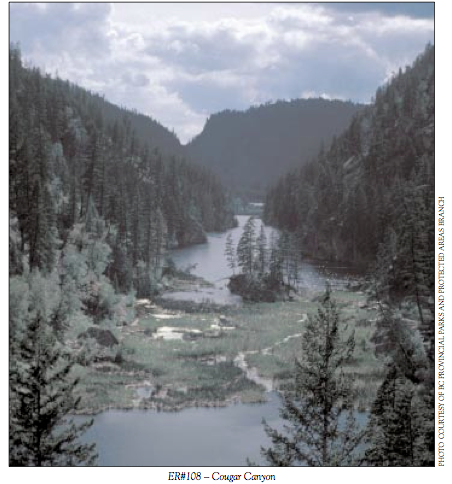 so in the interests of wind and limb more attention is now being given to a Goal 2 unit farther south above the Okanagan Valley. Its history is interesting and rather a sad story. In 1996 it was put forward in writing as an ecological reserve candidate based on a series of seasonally seepy small meadows along the top of a lava flow ending in a vegetated cliff. Spring wetness followed by summer baking makes for specialized growing conditions and a number of provincially rare plant species are to be found there. Because a local LRMP was on the horizon the proposal could not be dealt with under the prevailing ER candidate mechanism and had to wait more than 2 years to be included in the new process. At least two more years passed for the LRMP to reach its final stage followed by another wait for the Cabinet to accept it. Since that time in excess of another two years has passed and still implementation proce- dures have not legalized this or other successful Goal 2 units. It is now approaching eight years since the origi- nal proposal and whereas at the begin- ning the area was unknown and unused, it is now marked by a worn access which invites entry, has been used by campers on long weekends and bears the scars of trail bikes. In a perfect world one would look for flexibility in bureaucratic procedures that would enable property to be held in limbo to keep it inviolate if a lengthy delay were to be in prospect, but we do not live in a perfect world.

Despite these annoyances inventorying is underway and will continue over several years so that gradually, by mak- ing visits at different times from year to year, coverage of the whole property and the whole season can be obtained and the timing of events documented. Some of the work like identifying lichens and mosses or researching and writing up an account of geology, can be saved until winter which is useful for Interior and Northern wardens when outdoor pursuits are not always inviting. With a certain amount of searching it is sometimes possible to find material useful for venturing into the complexities of obscure phenomena as plant galls, diseases of vegetation or the labyrinth of insect life. From time to time researchers advertise for insect species of groups on which they are doing work and may be willing to return the name of those submitted. So the extent to which a warden can go is limited only by their ingenuity and personal interest.

BUT it is not stretching reality to conclude that ERs are seen at the highest levels in Victoria as an aggravating legacy from the past rather than an active commitment to the future, especially as budgets, staff and willing- ness are insufficient to cover management of provincial parks let alone foster the purposes of ERs. In recent years BC governments have seen contracting out of operational functions in parks as a means of easing management obligations and perhaps the time is right to consider whether ERs should be handled in a similar fashion. An inde- pendent body (or one associated with an academic entity) would be set up for this purpose and like other contractors it would earn agreed funds (sufficient for basic operational functions). A scientific panel would provide technical direction, and volunteer wardens would operate much as they always have though per- haps with more encouragement than they presently receive. Without doubt many able minds would be needed to develop such a proposal but at least it could lead to more caring patronage of ERs and help assure their original purposes. ■