KLASKISH RIVER ECOLOGICAL RESERVE Purpose Statement
Ecological reserves are areas selected to preserve representative and special natural ecosystems, plant and animal species, features and phenomena. The key role of ecological reserves is to contribute to the maintenance of biological diversity and the protection of genetic materials. All consumptive resource uses and the use of motorized vehicles are prohibited. Research and educational activities may be carried out but only under permit.

See the full PDF: klaskish_ps
Primary Role The primary role of Klaskish River Ecological Reserve is to protect an outstanding estuary and adjacent alluvial forest in the hypermaritime subzone of the Coastal Western Hemlock Zone. The reserve encloses the lower 1.5 kilometres of the Klaskish River, the upstream half of Klaskish Basin, alluvial lowlands associated with the river and its estuary, and valley slopes.
The main feature of the ecological reserve is the estuary of the Klaskish River which is in a near pristine state. It provides important habitat for juvenile salmonids, bald eagles, shorebirds, wintering waterfowl, including trumpeter swans, and potential habitat for the Olympia oyster ( 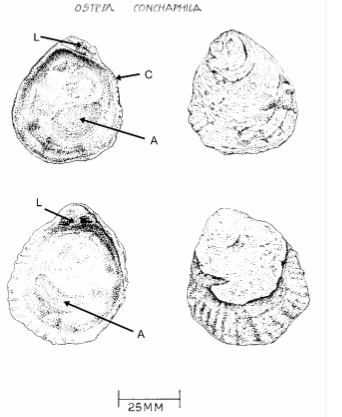 ), which is the only oyster native to British Columbia and is of limited occurrence on the coast. Significant runs of chinook, pink, coho and chum salmon spawn in the Klaskish River. The ecological reserve is also utilized by black-tailed deer, black bears, and Roosevelt elk.
Klaskish River Ecological Reserve contains diverse plant communities. Marine communities in the lower intertidal zone are dominated by eelgrass and rockweed. Three saltmarsh communities have been described on the rich flats in the upper intertidal zone. Sitka spruce dominated forest stands occur in the alluvial lowlands, and old growth western hemlock — western redcedar and western hemlock – amabilis fir associations occur in the uplands.

Diagram from DFO report on the Olympia Oyster.