We are highlighting this Management Plan here because of the way that BC Parks involved the community in it’s design.

A quote from the acknowledgments:

“BC Parks staff have prepared this management plan with assistance from a Francis Point advisory group, the McQuarrie family, The Nature Trust of British Columbia, and the Nature Conservancy of Canada. The planning process has been coordinated by Tom Bell, Planning Officer, BC Parks and by Marian Adair of Adair Consultants Ltd.
Staff of the Garibaldi/Sunshine Coast District and staff from BC Parks Headquarters provided useful comments and suggestions.
BC Parks would like to thank those who took the time to attend the public open house and make submissions or comments to assist in the development of this plan.”

For the original complete report see the pdf: Francis_Point

Note to Readers:
For the purposes of this plan, Francis Point Provincial Park and Francis Point Ecological Reserve are collectively referred to in the plan as protected areas. As well The Nature Trust of British Columbia and the Nature Conservancy of Canada may be referred to as TNT and NCC respectively.

Other important conservation values include:
An unusual grass-moss/lichen community that forms the most sensitive part of the rock outcrop vegetation. This includes the blue-listed dune bentgrass and a rare native subspecies of red fescue;
• An above normal species richness of vascular plants for the size of the Park and Ecological Reserve;
• Little evidence of invasive non-native plant species;
o Two red-listed (endangered or threatened) and one blue-listed (vulnerable)
plant associations. Red-listed:
CWH xm1- 01 Western Hemlock – Douglas-fir – Oregon Beaked Moss; and
CWH xm1- 02 Douglas-fir – Lodgepole Pine – Rhacomitrium. o Blue-listed:
CWH xm1- 05 Western Redcedar – Swordfern
• A site that will become increasingly more important for wildlife species dependent on old growth and older second growth forested habitats as development increases in the Pender Harbour area; and
• Over four kilometres of a relatively undisturbed and varied foreshore and intertidal area. Tourism and Outdoor Recreation Role
The outdoor recreation role of Francis Point Park is as a day use area focused on limited low impact recreation activities in a coastal forest and marine foreshore setting, including nature appreciation, hiking and walking, and landscape viewing.
The Park contributes to the collective recreational values in the Pender Harbour area, including:
• Public access to the marine foreshore;
• An opportunity to experience a rare undisturbed coastal forest site in this area of the
Sunshine Coast; and
• Significant viewscapes both from and to the water.
7
Cultural Heritage Role
The cultural heritage role at Francis Point protected areas is limited due to few heritage sites located within the areas. However, the adjacent land areas were extensively used by First Nations and were important in the first European settlements along the Sunshine Coast. The protected areas can provide an opportunity to interpret cultural heritage in a setting which closely resembles a relatively undisturbed example of the historic Sunshine Coast ecosystem and landscape.
2.3 Relationship with First Nations
The Francis Point protected areas are located within the traditional territory of the Sechelt First Nation. The protected areas are fee simple private lands which are managed as a provincial park and an ecological reserve. Traditional and contemporary First Nation activities which could occur within the protected areas would be the same as those activities which could occur on any private lands. Management within other adjacent provincial parks would be different and would allow for a greater opportunity to practice traditional activities for present and future generations of the First Nation’s people.
BC Parks and The Nature Trust of British Columbia would welcome the opportunity to work with the Sechelt First Nation to ensure protection of cultural resources and for the provision of culture based tours within the park area. BC Parks and the Sechelt Indian Band have completed a Traditional Use Assessment and Site Protection Plan which supports these opportunities and which can be used to provide guidance in the management of cultural resources. 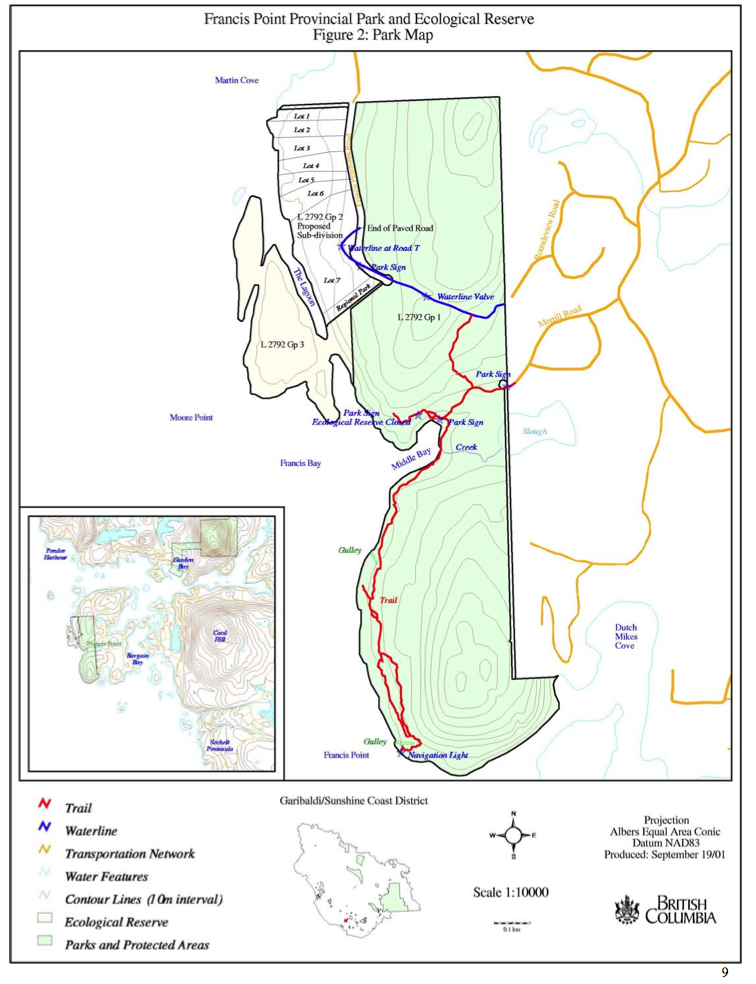