Plan Highlights Cariboo-Chilcotin Land-Use Plan Commitments
 This Management Plan for Itcha Ilgachuz Park and Ilgachuz Range Ecological Reserve was developed with the direct involvement of several Advisory Groups comprising a wide variety of interests and perspectives. The Advisory Groups will be invited to meet once a year to monitor and review implementation of the plan.
 The park ecological reserve will be managed for their provincially significant conservation and wildlife values, in particular woodland caribou, mountain goats, California bighorn sheep and grizzly bear. Sustainable public and commercial recreation will be encouraged in the park and will be managed on an ecosystem basis using the best available science so risks to conservation values are minimized. 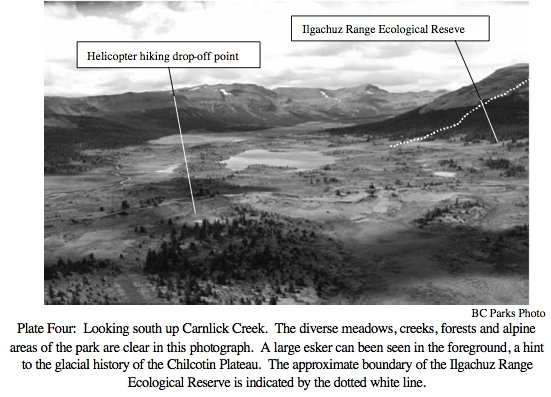 :4.3 Wildlife and Fish
Itcha Ilgachuz Provincial Park and Ilgachuz Range Ecological Reserve
The cool and dry alpine and subalpine forests and meadows of Itcha Ilgachuz Park provide excellent habitat for a number of provincially and regionally significant wildlife species. In addition, the park contains the headwaters and feeder streams of several regionally and provincially important rivers, including the Dean, Chilcotin and Blackwater.
In terms of wildlife, the park may be best known for the Itcha Ilgachuz caribou herd. This population has been blue listed (considered vulnerable) provincially by the Conservation Data Center (CDC) and is listed as threatened nationally by the Committee On The Status of Endangered Wildlife In Canada (COSEWIC) as it falls within the Southern Mountains National Ecological Area. The status of fish and wildlife is tracked by the CDC provincially and by COSEWIC federally.
The Itcha Ilgachuz caribou herd is part of the northern ecotype of woodland caribou.    This ecotype of woodland caribou feed primarily on terrestrial lichens during winter but will consume arboreal lichens. They are highly dependent upon old and mature f orests to provide wintering habitat. While caribou utilize large tracts of habitat outside the park, the park provides critical summer and winter habitat as well as essential calving areas. Typically,caribou calve near ridge-tops in the alpine in late spring,spend early summer in the high alpine, and as the summer progresses, they move gradually lower, with the majority of the population spending the winter in mid elevation pine forests.
The Itcha Ilgachuz caribou are considered one of the healthiest caribou herds in southern British Columbia, and as a result, is one of the few herds that has an authorized hunt. The herd has increased from approximately 700 animals in the early 1980’s to approximately 2000 animals in 2001, with some of the highest densities and calf recruitment rates in the province.
In addition to the caribou, a number of other listed species exist in the ark. A small herd (approximately ten) of the blue-listed California bighorn sheep live in the rugged valley to the north of Festuca Creek in the Ilgachuz Range. The origins of this small herd are unknown,although it is speculated they are related to the population that lives along the Chilcotin River to the east. This herd is the most northerly occurrence of California bighorn sheep in North America.
Grizzly bears and wolverine are the other blue-listed mammals that the park supports. Itis conservatively estimated that 40 grizzly bears live within Management Unit 5-12, a large unit that includes the park. The park provides early season habitat for grizzly bears, who target alpine plants in the park. The lack of avigorous berrycrop or large fish populations in the park limits their late summer and fall use of the park however. Little is known about wolverine use or populations but the large colonies of hoary marmots that live in the rocky outcrops throughout the park likely provide much of their food supply.
There are two local populations of mountain goats in the park. One concentrates on the steep sidehills and scree slopes of Pipe Organ Mountain in the Ilgachuz Range, and the other can be found in the vicinity of Mount Downton in the Itcha Range. Both of these populations are growing relatively quickly, with the Pipe Organ population numbering about 50, and the Downton group containing about 10-15 animals.