Abstract
Epiphytic algal growth comprises a large and complex community of the sublittoral Pacific Northwest. However, very little is known concerning population composition or dynamics in non-obligate epiphytic communities. This study aims to shed light on the epiphytic community on Pterygophora californica stipes through the population interactions of Nereocystis luetkeana and Laminaria saccharina.
P. californica individuals at 8 and 12 m depth were identified and the location of any epiphytic N. luetkeana and L. saccharina along a stipe were noted. Digital video of the actual sampling and a digital herbarium were created in conjunction with this project.
N. luetkeana and L. saccharina showed distinct banding along the stipes of P. californica. At both depths, N. luetkeana inhabited the 70 to 110 cm range (uppermost region) of the stipe, while L. saccharina mostly inhabited stipes between 40 and 80 cm (mid-stipe) from the host’s holdfast. Overall epiphytic population densities increased with depth.
Arguments concerning when the colonisation of the stipe takes place and light intensity requirements are put forward. Further work is needed to explain this community structure. 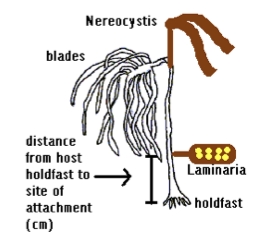