From The Sunshine Coast Conservation Association

The Sunshine Coast’s only ecological reserve, at Ambrose Lake on the northern Sechelt Peninsula, is threatened by a new proposal to log a large area immedi- ately adjacent to it. The cutblock recently laid out by Interfor lies mostly within the lake’s watershed and appears to target areas of mature forest and patches of old growth right against much of the reserve’s northern boundary. This is the same area that faced a similar threat more than 10 years ago, and the Pender Harbour & District Wildlife Society, a member group of the SCCA, success- fully argued then that logging could not be done without affecting the reserve. 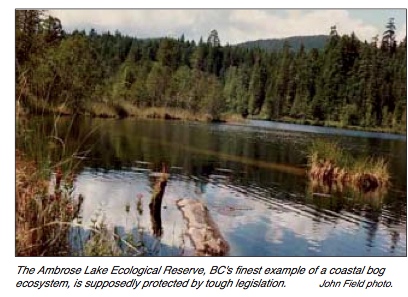 Ecological reserves enjoy the strongest protection of all conservation areas, even stronger than Class A provincial parks. They are usually created for the perpetual protection of examples of ecosystems in their natural, undisturbed state, and as such are for the plants and creatures that live there, not for the enjoyment of humans. The only allowed uses are related to non-intrusive scientific investigation and education. A permit from the Parks Branch is technically required to enter an ecological reserve.
Ecological Reserve #28, Ambrose Lake, is one of the province’s oldest, created in 1971 to preserve a small coastal lake, adjacent bogland and surrounding forest. The lake and sphagnum bog ecosystems are in near-pristine, climax state. They are characteristically acidic and nutrient-poor, and as a result are unusually sensitive to disturbance. Even something as invisible as an increase in nutrients (due to increased runoff and decreased capture of nutrients by terrestrial plants following logging) would likely alter the chemical balance of the bog. Also likely are elevated summer water temperatures, as well as a change in seasonal runoff patterns, typical after logging because soils are less able to retain moisture for slow release as groundwater seepage during the dry summer months. A more visible problem is that this area is subject to strong winds, as evidenced by many recently blown-down trees in the forest adjacent to the lake. A fresh edge of non-windfirm trees right along the boundary of the reserve will undoubtedly result in a considerable increase in blowdown within the reserve.

Unfortunately, much of the lake’s northern watershed was for some unknown reason left out of the reserve when it was created. In fact, the northern east-west boundary lies so close to the lake that in one place it passes within 60 metres of the sphagnum boglands that surround it. The Pender Harbour Wildlife Society made a formal proposal in 1990 to the then-Socred government to have Crown land in district lots 5399 and 5400 added to the ecological reserve to more adequately protect its vulnerable northern watershed. No formal answer to this proposal was ever received.

What has changed since 1991 that would now allow logging to proceed? And how can it proceed in a way that won’t affect the reserve (a legal requirement)? According to a letter from Interfor’s area engineer, Jeff Pollock, road-building and logging practices are much better now; also, partial retention methods will be used, rather than clearcut logging. We are asked to accept Interfor’s word on this, without any supporting assessments or site studies. The Ministry of Forests has given preliminary approval to the cutblock in principle, again without docu- mentation of Interfor’s ability to leave the ecological reserve unaffected. (It has, however, stipulated that Interfor must meet with Parks Branch and wildlife society representatives to address their concerns before a cutting permit can be issued.)

By contrast, there are specific expert opinions written in October, 1991—one by a MoF hydrologist and the other by a forest ecosystem specialist—which clearly support our contin- ued conviction that any human development within the water- shed has significant potential to affect Ambrose Lake. Both reports conclude that the best use of the land would be to add it to the ecological reserve. We agree.