Introduction
Sutton Pass Ecological Reserve is located approximately 40 kilometres west of Port Alberni on
the south side of Highway 4. This reserve was designated primarily for the preservation of the
red listed Adder’s tongue fern (Ophioglossum spp). Due to the small size and easily accessible
location of Sutton Pass Ecological Reserve, coupled with the rarity of the Adder’s Tongue fern,
there was a clear need to survey Sutton Pass for Adder’s Tongue to be used for inventory and
monitoring purposes.
Methods
After an initial site visit in early July I became more familiar with the Sutton Pass ER and the
general location of the Adder’s tongue ferns in the reserve. From this visit it was evident that the
ferns grew in or adjacent to the small pond in the reserve. On August 17, 2001 I returned to
Sutton Pass ER to conduct a survey of Adder’s tongue fern in the ER.

In an effort to take a random sample while encompassing the limited habitat of the Adder’s
tongue fern in the study, I designed a transect system which ran adjacent to the pond on its three
accessible sides. On each side of the pond three parallel transects were laid out. A baseline was
established roughly perpendicular 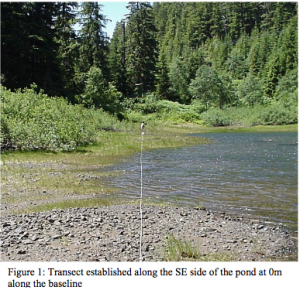 to the pond edge. The baseline
bearing was taken and recorded,
and a six metre baseline was
established. Attempts were made
to establish the transects parallel
to the pond edge. A bearing for
the transect to follow was taken
and recorded. The first transect
was located closest to the pond at
0m along the baseline. The fifty
metre transect was established
along this recorded bearing. See
figure 1 for an example of a
typical transect. The second and
third transect were established
parallel to the first transect, at 3m
and 6m along the baseline. This process was repeated on the other two accessible sides of the pond. Each transect had five vegetation plots. 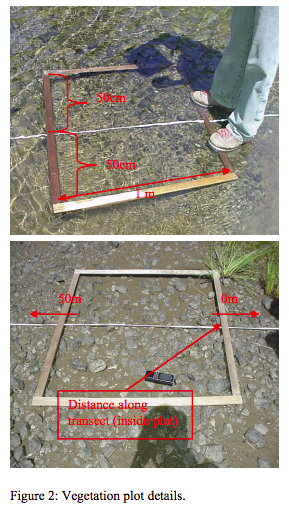 There was one plot for each 10m section of transect.
The plot size was one square metre (1m2
). For the locations of each plot within the 10m section of  transect, a random number generator was used to  determine how far along the 10m section to set up  the plot. The random number generator generated all
decimals. In order to remain consistent I used only  the first two digits to the right of the decimal point.  For the purposes of determining plot location in this
survey the number 0.021 was read as 0.2 m, and  0.829 was read as 8.2 m. For example, in the first 10m section the vegetation plot location will be at the point on the transect that matches the first random number generated (0.829 rdm#  plot at 8.2m along the transect). In the second 10m section
(10m to 20m) the plot location will be at the point along the transect that is equal to the new random number generated added to the initial 10m (0.321  rdm#  3.2m + 10m = 13.2m, plot at 13.2m along  the transect).  The vegetation plots were placed so that the bottom  edge of the plot was situated on the randomly  determined location number while bisecting the  transect line. Figure 2 illustrates the location and  positioning of the vegetation plots used in this  survey.

Results
See datasheets in appendix. Map in hardcopy with report or on see Sutton Maps folder.
Photographic Overview of Sutton Pass ER pond site
See Sutton Photos folder
Notes
Due to the fact that Adder’s tongue fern is listed as an endangered species by the Conservation
Data Centre, and in keeping with BC Parks Conservation Principles, it is in the interest of BC
Parks to ensure that this fern remains in the Sutton Pass ER. This vegetation survey provides an
overview of the general locations where Adder’s tongue fern is located in the Sutton Pass
Ecological Reserve. The distribution of Adder’s tongue fern in the ecological reserve was found
to be clumped, likely due to both the growing conditions of the site, as well as the reproductive
strategy employed by the fern. This survey has the potential to be replicated for monitoring
purposes to detect any change in both the location and the abundance of Adder’s tongue fern. It
may also be prudent to monitor the water level in the pond, as it appears to have a significant
influence on where this fern establishes. One should also consider that time of year has a
significant influence on the water level in the pond and hence on the distribution of Adder’s
tongue.